Doug Giles Defends Josh Duggar Because of Course He Does

Our homily today will be delivered by the Reverend Mr. Giles, rector of the Testosterone Tabernacle and Ramada Inn. 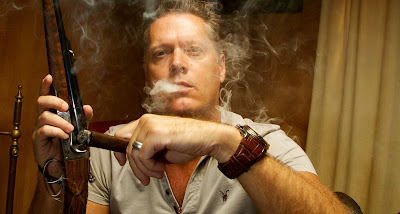 "Because I'm a man! A MAN! [Grabs crotch, misses. Successfully seizes junk on second attempt with the aid of a dental mirror] A MAAAAAAN!"

A Frenchman, apparently. But still...

sitting around and watching a couple with nineteen kids wearing Mormon dresses with Pentecostal hairdos do chores and squabble about Scrabble didn’t really pique my interests.  Call me carnal.

"I prefer it when a man's daughters are dressed like whores. That's how I raised my daughter Hannah, and look where she is now.  (That wasn't a figure of speech, by the way, I was hoping you could look to see where she is now, because she seems to have been swallowed up by the obscurity she so richly deserves, but a few years ahead of schedule...)"


No, when I watch TV it’s either the news, Netflix, Hitchens on YouTube, chick flicks (for my wife), horror movies and/or warrior pics for me or one of Mark Sullivan’s dangerous game hunting DVDs that I usually have on a loop like the Warren Commission did The Zapruder Film. Exciting, eh?

Even by today's fairly elastic standards of manhood, I'm no Crom-worshiping Cimmerian, but I don't feel the need to document my masculinity every single paragraph. Could Doug be working through some issues, do you think? Maybe he invited his bros out for a canned hunt, and they tracked a fainting goat through a petting zoo and then gang bang-banged it until the goat was reduced to a semi-liquid form -- sort of a glo-coat of goat splashed across the fence -- and afterwards they all went out for brewskis and that new wiener crust pizza from Pizza Hut, but then the bill came and Doug's man card was declined.


I said all that to say this: I don’t have a dog in the Duggar hunt...That said, I don’t wish them ill and I hope they pull out of this harmatological hell that has hit their home.

Doug makes it sound like the Duggar house was hit by a tornado, rather than hosting serial episodes of sexual abuse by one of its residents. Josh Duggar's behavior can be described in a number of ways, but I don't think "Act of God" is one of them.


I will tell you, however, that there is someone out there who is McLovin’ on The Duggars right now.  Her name?  Hillary Rodham Clinton.

If anyone is McLovin' on the Duggars, I'd think it was McDonalds (I still can't believe they missed the chance for a cross-promotional merchandising tie-in between Superbad and their "I'm Lovin' It" campaign. Now I'm just spitballing here, but what about Happy Meals containing tiny airline bottles of Absolut and Jägermeister?)  Anyway, I'm sorry for interrupting, Doug. You were lying...?


Why do I think the old Hildebeest be diggin’ on the Duggar debacle?

As you can see, Doug is down with the street, a preacher who can really rap with the teens because he "groks" their cuckoo lingo. I don't think there's been another clergyman this hip since Pat Boone in The Cross and the Switchblade.


Well, it’s principally because it’s keeping the coverage off her abysmally unattended stump speeches, her intergalactic horse-scat and the disgustingly dirty Clinton Cash.


Yep, I guarantee Hillary is in some underground lair donned in a Dr. Evil nehru suit, maniacally laughing her haggard backside off

To quote Crow T. Robot: "Whatever tugs at your bobber, little buddy."


Matter of fact, I wouldn’t doubt if her cabal had that police chief yield up the sealed Duggar intel to InTouch because it was in Little Rock, y’know?  I wonder if that police chief has any connections to The Clintons? Any campaign contributions? Any soirees over lemonade and sweet potato pie? Now, that would be worth poking around a bit, wouldn’t it? Maybe Peter Schweitzer’s team could take a little “look see” as they say in Arkansas? But that’s enough of my right-wing conspiracy theories.

Maybe we should bring back The Arkansas Project? True, the sequel to The Blair Witch Project didn't do that well, but hope is the thing with feathers. Anyway, if I'm reading Doug correctly, Hillary Clinton suborned a teenage Josh Duggar to sexually assault his sisters, knowing that his family would later get a reality show and become famous, and thereby allowing Clinton to dramatically reveal the crime thirteen years later and draw attention away from the announcement of her presidential campaign. Wow. And I thought Sauron had a gift for long-range planning.


Now to my point: According to The Left, unless one’s perfect you can’t call sin, sin.  Jim Bob’s and Josh’s denunciations of homosexuality, according to Libs, is illegit because of Josh’s past gross vices, even though he confessed them and repented of them.

Josh's demand (or at least, the demand of his former employer, the Family Research Council) that "denunciations of homosexuality" should have the force of law are "illegit" (but not too illegit to quit. Or at least to resign under pressure) because we're not yet a theocracy and nobody, to my knowledge, has elected Duggar Pope, or Lord Protector, or High Sparrow, or whatever.  But the point Doug really can't seem to grasp, because he's as blind to hypocrisy as he is to irony, is that people are pretty much automatically allowed to ignore pronunciamentos on sexual morality issued by people who have themselves committed gross violations of morality, sexual and otherwise. Even if they did confess and repent of them once they were exposed in the press and the statute of limitations had elapsed.


That’s what I’m getting as the main rub that folks have with the Duggars and their Christian values they’ve extrapolated on our crappy culture. Am I right?


But the label the Left is attempting to placard the Duggars with, i.e. “hypocrisy” doesn’t fit him/them in this case as far as the biblical definition of the word goes. Hypocrisy, according to Jesus, Joseph and Mary, is condemning in others what you’re currently practicing or have practiced in the past and have yet to repent of.

You have a point. Josh Duggar has never, so far as I know, gone on a public crusade against heterosexual incest and molestation, but only accused homosexuals of doing such things, and as long as he's not secretly having buttsecks with his brothers and concealing that too, we should totally pay heed to his moral insights.


It is not hypocritical for repentant sinners to point out what the Scripture states is bad behavior. Duh.  If that were true there would be no biblical instructions, as it was written, by inspiration of the Holy Spirit, by a bunch of saints who had sinful San Andreas sized faults.

Josh Duggar, Patron Saint of Inappropriate Gropers.
Posted by Scott at 7:42 AM

Somehow, "rector" seems such an appropriate title for Doug.

Doug switches his flicks until something flicks his switch.

Doug constantly refers to himself as moi (comic styling #3,488,765 c. 1973), but I wonder if he realizes that the bulk of his readership probably pronounces it "moy"?

What would you pay to ferret out Doug Giles' grammar teacher and have her read that? (Me? I hope she's a gun lover...)

Yep, I guarantee Hillary is in some underground lair donned in a Dr. Evil nehru suit, maniacally laughing her haggard backside off

Every horrible writer on the Intertoobz--all 37 million of 'em--is now in love with you, Dougie boy, because you just made every peckerboardin' one of 'em sound like Marcus Tullius F Cicero, and that's the FSM's own truth..

Seeing as how he went to the extent of smojackulating all over his own face (smokkakke?) I'd say no. Only question I have is, what do you light up after that, eh?

Only question I have is, what do you light up after that, eh?

Your palm, I believe. That's how Gordon Liddy used to prove he was a tough guy.

The Rector of St. Ramada-on-the-Strand.

Rector? Damn near killed he... Wait, Hitchens on Youtube? WTF?

Keith here, Scott, give this boy some time to ripen. He's only a few thousand brain-plaque prions away from Pastor Swank. We're looking forward to it.

Man, I had forgotten all about that dude. He always cracks me up

In answer to Marion's question: No, but I'd pay to see ferrets reenact a certain scene from "The Beastmaster" on Dougie boy.

Josh is more like the Patron Saint of Desperate Cover-ups. I hear he inherited the job from Nixon.

Hm, Keith, I fear I can't agree about Doug becoming another Blessed Swank. Not only is he way meaner - because you can imagine Doug getting tanked and actually drawing on someone, something I can't see the Pastor ever doing - but he's too tangled up in his nasty, ridiculous machismo to let the inspiration really fly. You can't speak in tongues while grabbing your crotch with one hand and jerking the middle finger skyward with the other. This has been scientifically established.

Thanks for your comment. Most is wishful thinking on my part. One can only dream there's another Swank to take his position on the intertubes.

But not certain that speaking in tongues while simultaneously engaging in crotch-grabbing and bird-flipping are mutually exclusive. There are people who can chew gum, walk and perhaps discharge automatic weapons all at once.