Episode 49! Areolas of the Undead! 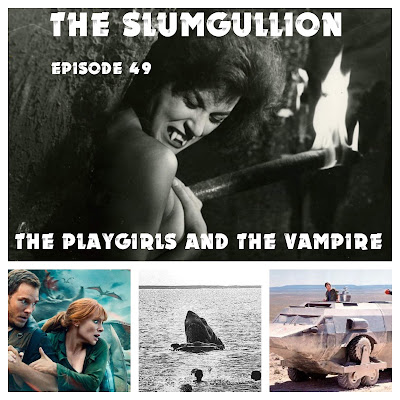 Angry Star Wars fans want to remake The Last Jedi, so Jeff and Scott accommodate them by doing a dramatic reading of the Angry Fans' manifesto, then hastily remaking a bunch of classic films, using modern tropes, techniques, and technologies (Lawrence of Arabia moves a lot faster when everyone's riding around the desert in those Landmasters from Damnation Alley). Finally, it's a quick detour to Jurassic World enroute to our final destination, The Playgirls and the Vampire, a 1960 Italian import that supplied mid-Century America with it's Minimum Daily Adult Requirement of imported nipples.

And here's the new episode. Enjoy! 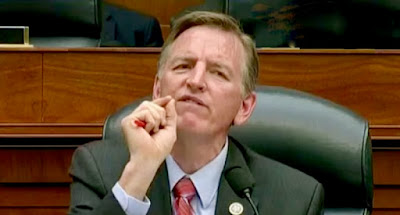 "By the way I'm a dentist. I read body language very, very well. And I can tell you're lying, Agent Strzok, because now I'm reading your MIND, using Dental Telepathy...!"

Well, even though they're no longer kittens, and certainly no Brett Kavanaugh, I would like to formally nominate the cats for Supreme Kitty of the United States! 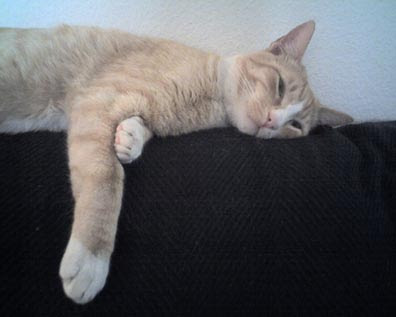 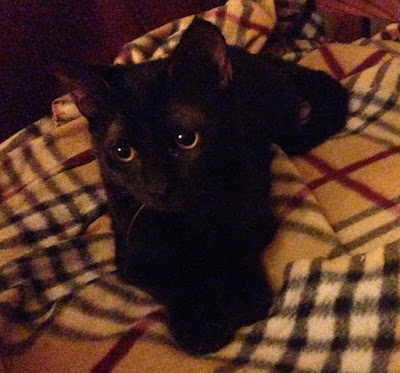 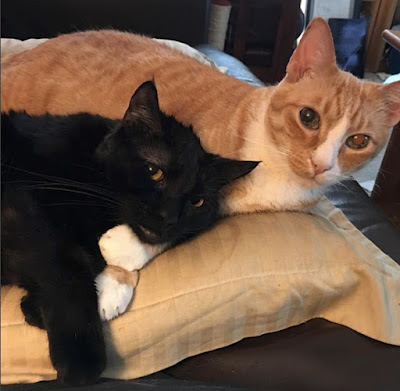 Your National Kitten Council recommends you snuggle kittens at least three times a day.
Posted by Scott at 12:18 PM 2 comments:

Ninjas and Kaiju and Samurai, Oh My! 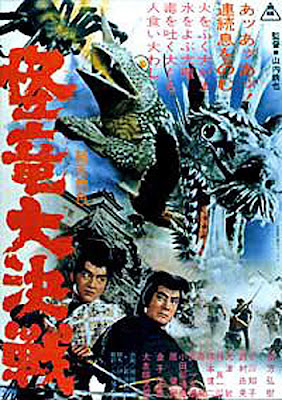 After slogging through so many cinematic train wrecks for you guys, I've decided it's time for a bit of a change. The Magic Serpent differs from my typical review fare because for once, this is a film I like. Mostly because it never pretends to be anything other than a gloriously bonkers mashup of kaiju and samurai flick, with a generous side of sorcerous shenanigans.

If you were a fan of MST3K in its early years, you're already well acquainted with how downright loopy Japanese giant monster films can be, from such choice selections as Godzilla vs. the Sea Monster -- i.e. an enormous lobster -- and Godzilla vs. Megalon -- that is, a cockroach the size of a skyscraper, unleashed upon an unsuspecting world by the secret undersea kingdom of Seatopia.

But what really drove the point home was the deep dive Joel and the 'Bots took into the entire first Gamera series. For example, there's nothing like the sight of a five thousand ton, rocket-powered flying turtle doing a gymnastic routine on the five-kiloton-turtle-sized horizontal bar -- which brain-eating alien hotties have thoughtfully installed in their city beforehand -- to make the Western viewer conclude that the Land of the Rising Sun's approach to fantasy can be ... well, different.

The Magic Serpent (a.k.a. Kairyu Daikessen: "Mystic Dragons' Great Decisive Battle") debuted over a decade after the Big G. emerged from Tokyo Bay, in that somber, almost documentary-style first entry in the Toho series. (If you've never seen the original film, instead of the Americanized release starring Raymond Burr, you really should check it out sometime. I was lucky enough to catch it on the big screen in its 50th anniversary re-issue, and I have to tell you I was floored by how much better the original was than that staple of mid-20th-Century afternoon and late night TV.)

By the mid-Sixties, Toho Studios had accumulated quite the stable of giant monsters. Beginning with his second movie, Godzilla Raids Again, Gojira was joined by the likes of Anguirus, Rodan, Varan, Manda, Mothra and (my favorite) Ghidorah the Three-Headed Space Monster a.k.a. Monster Zero. So it was only natural other studios would be eager to get their own piece of that sweet kaiju action. Unlike the Gamera series, though, most of these were imitative one-offs like Monster from a Prehistoric Planet; Gappa, the Triphibian Monster; and the superbly screwy The X from Outer Space.

Sooner or later, given the popularity of both giant monster films and the even more ubiquitous samurai epics, someone was bound to try out kaiju in a medieval Japanese setting. And in fact, 1966 was also the year Daiei, the same outfit who gave us Gamera, kicked off its Daimajin series, starring a huge stone idol that comes to life in the last act and saves his oppressed worshipers by squishing the bad guys like bugs. (Think of it as a Japanese version of the Golem.)

The Magic Serpent, on the other hand, is a Toei concoction. The name may not ring a bell, but these are the people who had previously brought us such immortal classics as Prince of Space and Invasion of the Neptune Men, and, in the near future, would partner with MGM to produce that legendarily cheesy alien infestation flick, The Green Slime.

This was Toei's first color film, though sadly, my copy is badly faded. It was also their second picture in a widescreen format. Unfortunately, this print is the American International TV version. And forget about pan-and-scan: They simply cropped the edges, so often you'll see only a sliver of a character who ought to be in the scene.

Yet even in this washed-out and mutilated version, it's obvious Toei decided to pull out all the stops.

They certainly don't waste any time getting down to business, as a gaggle of ninjas poke their heads over a wall and immediately launch a night attack on a castle sited on a high bluff overlooking a lake. Using enough pyrotechnics to satisfy even Big Jim McBob and Billy Sol Hurok, castle guards are blowed up real good and slaughtered right and left by the ninjas.

Lord Ogata and his wife are awakened by the commotion. When his chief vassal, Yuki Daijo, appears, the daimyo demands to know what's going on. Yuki tells Ogata he's been betrayed by someone close to him. Real close. Like, standing in front of him right now.

Ogata lunges for his sword, but before he can draw it from its scabbard, he's slit up a treat by his treacherous servant. His wife tries to run for help, but she's impaled through the shoji by Yuki's ally, wicked sorcerer Orochi-Maru.

There's still one prospective victim unaccounted for, though: Lord Ogata's son, Ikazuchi-Maru. (Since I don't want to take up the space required to explain what's up with that "Maru" suffix, I encourage any reader who has some time on their hands and a yen for philological trivia to look it up. What's important is this doesn't mean he's related to the bad guy.)

While the castle burns behind them, some loyal retainers spirit the young boy to safety in a boat. Ikazuchi-Maru thinks the conflagration makes the castle look pretty, all lit up like a lantern. Which is a line that -- assuming the dubbing is a more or less accurate translation -- is actually both poignant and believable, coming from a child his age.

Pretty much your standard set-up for a dispossessed-heir-seeks-revenge adventure, right? It seems as if they're in the clear, but the lake begins to bubble and seethe. Up pops a very large and very traditional-looking oriental dragon, who is in fact our naughty wizard. ("Orochi-Maru" can be translated as "demon serpent".) 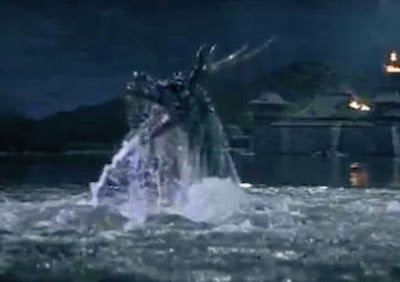 The fearsome beast overturns their boat, drowning everyone except Ikazuchi-Maru. Orochi-Maru the were-dragon is poised to finish the job, as the boy clings desperately to the bottom of the overturned skiff. Then a huge eagle appears.

It swoops down and nicks the dragon on the forehead. I know cuts to the head tend to bleed freely, but in this case the red stuff positively sprays. This critter really ought to have his blood pressure checked.

The bird rescues the child -- at least, let's hope that's what it has in mind -- and wings away with Ikazuchi-Maru dangling from its claws. 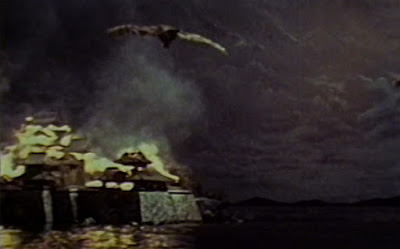 Fast forward fourteen years. Fortunately, Ikazuchi-Maru wasn't eaten, but has instead grown into a strapping young lad. Out for his daily jog down the precipitous side of a ravine, with no warning at all, throwing knives come at him from out of nowhere. He narrowly avoids them, but then he staggers and topples back out of sight behind a low rise. Flames shoot up from behind the hillock -- so the guy was highly flammable?

A white-haired, luxuriantly bearded elder flies down from the top of the ravine and peers into the blaze. But not so fast: Tricky Ikazuchi-Maru sneaks up behind the geezer and puts one of those throwing knives to his throat.

The wizard, Dojin Hiki, is pleased: He congratulates Ikazuchi-Maru on finishing his training. Now, declares the Master, the boy is ready to go out into the world and make a name for himself. Dojin Hiki surprises the graduate, though, when he mentions he had another student. But this one went to the Dark Side. (He never visits, he doesn't call or write -- not even a postcard!) His mentor refuses to sully his lips with the nogoodnik's name.

Ikazuchi-Maru bounds off to the forest to gather some herbs for their farewell dinner. After he departs, the Master suddenly whirls around and chucks his staff at the cliff face. It buries half its length in the (dirt? really soft rock?) for a moment, then returns to the wizard's hand. After a dramatic pause, the spot where his staff struck the cliff crumbles away; a ninja emerges -- but keels right over.

The Master grumbles that lately these guys are getting to be real pests. And you know what they say: For every one you see ...