I'm having a bit of an ulcer-inducing week, and wasn't feeling up to harvesting even the usual low-hanging fruit today.  Fortunately, long time reader and lurker Emily was kind enough to send us a package of "Cat Crazies," to augment Riley and Moondoggie's new Pillar of Scratchitude (along with an additional supply for Sheri's menagerie, which I have dutifully forwarded), so instead of reading crazy crap from RenewAmerica, I just sat for awhile and watched my own cats take enthusiastic leave of their senses.  It was highly therapeutic.

Cat Crazies, for those who don't know (and I didn't), are deceptively simple toys consisting of tabbed, uneven plastic rings that flip out of one's non-opposable grasp at the slightest pounce, thereby causing the cat itself to flip out, and providing hours of fun (or minutes, if it takes a bad hop and winds up under the couch).

She also shared an image of her own cats, Richmond and Burnaby, who appear to be the Chang and Eng of the feline world: 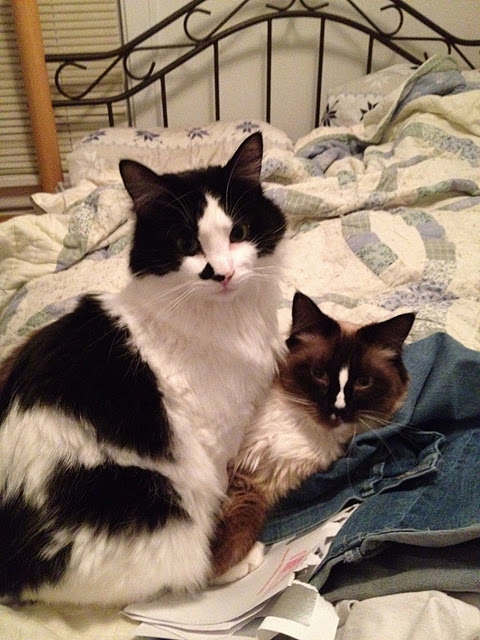 Cute, huh?  I don't know their breeds, but Richmond appears to be a Hitler Cat who slept on his mustache.

Emily, like s.z., is also in the Feline Rescue business, and provided a video featuring one of their refugees giving a Ron Popeil-like demo of the Cat Crazy in action:

Emily explained:  "Our manager at the shelter in Petco is also a videographer, so she makes tons of movies at the one I work at (CAT's youtube channel is here)."  She concluded by saying:


So If you have any friends or friends of friends in the Portland area looking for a cat to adopt (or to foster, or to visit, or to sponsor, but to hopefully adopt), look no further than Cat Adoption Team, in beautiful Sherwood, Oregon. It's a no-kill, feline only shelter with outreach centers in several Petco, Petsmart and Nature's Pet locations in the Portland Metro Area.

So to you Portlandians I say this:  It doesn't matter whether you're a Beaver or a Duck...we all need Cats.
Posted by Scott at 1:03 AM

Cute kitties! I hope someone adopts that one in the video soon.
~

Very cool. All of the cat toys in the world, people have sent/given my two chirrens (yes, there's only ONE now, but it fucks-up the narrative, if you don't mind), with and without catnip, and y'know what really gets 'em up off of their fat asses and playing? The red "laser" pointer? Not since around '02. Ribbons of petrochemical fleece on plastic sticks? Hardly. Wind-up mice? (Bless my Nannie's heart, if she saw something that she could mail-order for them, she'd do it!)

Seriously. They'll chew on, chase, flip, play "fetch" with (not even remotely kidding), play hockey with 'em, whatever they can think to amuse themselves. Biddy doesn't play with much of anything nowadays, sadly, but if I can get her outside to graze and be a cat for a few minutes a day, it's a minor miracle.

ANYWAY, these Cat Crazies seem to be the perfectly-up-engineered version of milk-jug rings, because of how they're designed, with the little legs and such, they don't just land FLAT and sit there. Very fucking cool. Welp, it's well past daylight, and Her Majesty wants to go outside, so I have to go whenever she's willing, since she's usually only willing for 10 minutes or so. About as fond of the neighbors and their screaming spawn as I am.

I couldn't agree more, The Cat Adoption Team is great! Portland is a great pet town.

Annti nailed it: the cat crazies' design is undoubtedly inspired by the common milk jug ring, although it has been nicely optimized for cat usage.

That is a toy I would not mind having, I LIKE IT VERY MUCH!

I ordered some from Amazon for the kittys in my garage. They remind me of the ring-tab from juice or quart milk cartons. I give those to Chester Cat and he promptly whacks them under the refrigerator.

Thanks so much for posting this. I'm really happy Riley and Moondoggie like them.

Richmond (the askew Hitler cat) is a Ragamuffin and Burnaby is a Ragdoll (but not purebred. I guess Hitler would be irritated by that). They are extremely close, as you can tell, even for litter mates.

They are very pleased to be famous now. Burnaby is eating a cardboard box in celebration.

Mine don't get Cat Crazies anymore, due to a tendency to leave them in the hallway where I step on them in bare feet and curse for hours. They get rings from milk jugs, mayo and relish bottles (which are larger and just as much fun) and similar rings which are less likely to actually cut my feet open. They also love assorted bottlecaps, just for a sense of how sadistic my cats can be to bare feet.

Their favorite toys, though, are Q-Tips. I've never had a cat whose idea of heaven wasn't two or three Q-Tips in an empty bathtub. Cypress used to know what drawer they were in and how to pry it open to get at them. Iala and Nagi do know what drawer they're in and just whine at us when we open it for any reason.

Burnaby is also nuts for Q-Tips, but whenever he asks for them I tell him he's got enough goddamn toys.

I have been looking for these toys everywhere! One of my cats loves them (loves to play fetch with them too), but she hides them somewhere. We've gone through bags of these things. But then PetSmart stopped carrying them. I haven't been able to find them online because of not having a good name to search for. But "Cat Crazies" it is!

Good luck with the adoptions. They look very sweet!

Had one cat that loved tampax applicators to the point where I had to get a lidded trashcan so she wouldn't fish them out to play with. Did that one time when company was over. Might have been an embarrassing moment if we weren't all stoned. My black cats love wadded up paper ball. I get tired of tossing them to play fetch with long before they do. Ah, it's those little things in life eh!?

Gappy, honey, Keith has a kitteh story that will make yer tampon tubes look like proper high tea with the fuckin' queen. Can't recall which post, has probably been pushed off of the front-page, but still alive in the archives & insane in the brain.

You have been warned, esp. since none of us (shaddup, Butch, dammit!) are allowed to get stoned anymore, that it might not be as "blithely amusing" as it was perhaps intended... Just keep scrolling, you'll find it.

I'd have to say that, aside from the Picasso-level "artwork" provided by Boy & Biddy's barf-murals upon the floor, that the grossest thing that I can put in these comments is the reiteration of the "petrified Hershey's kisses" issue... She never WAS a neat freak, but if she'd just PAY ATTENTION before she leaves the litterbox... is that so much to ask?

And even though I *never* buy cat toys (the damned canned food is expensive ENOUGH!), I am going to look for a few of these Cat Crazies, as long as I don't break an ankle on one or faw down go boom.

Also: Anyone looking to be TRULY disturbed/grossed-out should try Corman's "Bloody Mama, with Shelley Winters, Bruce Dern and a very VERY young DeNiro. My flesh is STILL crawling, and that's from the bowdlerized-for-teh-teevee version!

(Ironic or sick? Super-secret decoder-ring word? PREMEN Interpret as you will...)

and why in the HELL can't Waffle House make decent waffles OR deliver?!?!!

Update: Adele was adopted on Saturday! She was featured in an ad in the Oregonian and was adopted that day. Huzzah!