Tina Louise had an unusually varied career for someone often pigeonholed as a sex symbol. A member of the Actors Studio, she modeled for the Frederick's of Hollywood catalog and various men's magazines while acting on Broadway (Will Success Spoil Rock Hunter?, Li'l Abner), and appearing in both motion pictures and prestigious live television dramas. But let's face it, she will always be best remembered as the glamorous beauty stuck on an island and surrounded by idiots, in Sappho, Venus of Lesbos.

This is a curious, even bizarre, entry in the sword 'n sandal genre.  It features many European actors familiar from peplum films of the 50s and 60s, but instead of an American bodybuilder at the center of the action playing an ass-kicking Hercules or Samson, we've got Tina Louise playing the poet Sappho, opposite fellowAmerican expatriate Kerwin Matthews (The 7th Voyage of Sinbad, Jack the Giant Killer), who once again proves that as an actor, he's most convincing when his co-stars are added in post-production by Ray Harryhausen. 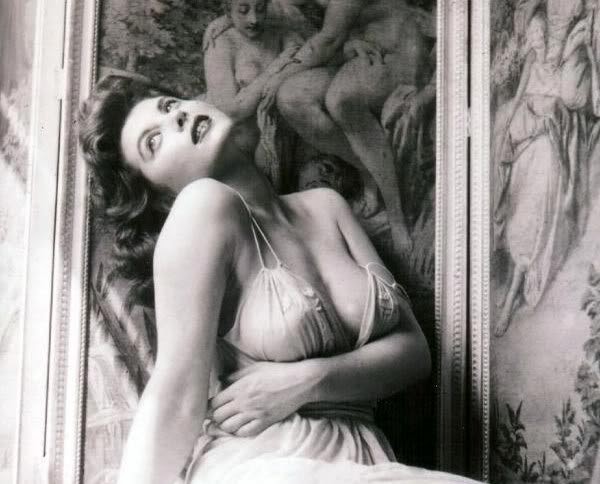 Kerwin Matthews, wearing a tunic so short it’s basically a belly shirt, is sitting on a rock, leading a Robert Bly workshop, and explaining to a semi-circle of half-nude extras why Iron John wants them to air out their scrotums twice daily. The Vienna Boys Lesbian Choir is humming the haunting Love Theme from Sappho, Venus of Lesbos, when suddenly Kerwin and the Greek Anti-Pants League are attacked by the USC Marching Band, which are in a crappy mood because they’ve forgotten the lyrics to “Tusk.”

Everyone dies except Kerwin, who leaps on a horse and rides away, which would normally lead to an exciting chase scene, except Kerwin somehow manages to instantly fall off the horse and then off a cliff, knocking himself cold. So it’s not exactly a clean getaway. The Trojans decide to leave him for the Lesbians, who’ve been known to skeletonize a grown man in less than 12 seconds.

Cut to a circus maximus nearby, where three hot women – a blonde, a brunet, and redhead Tina Louise -- are competing in the Ben-Her chariot race. Tina, who has Charlton Heston’s team of four white stallions, is whipping them into a froth, which visibly excites the all-girl crowd in the stands.

Now let’s head to the exclusive after-party at the Temple, where hot young woman lounge around watching hot young woman dance around, and Sappho prays to a giant statue of Aphrodite, asking that whoever took her Phranc albums please return them.

The lead Trojan, Hyperbole, barges into the Temple in hot pursuit of Kerwin, and all the girls scream and run like it’s a panty raid on the sorority house. Hyperbole is in love with Sappho, and offers to quit massacring drum circles and profaning the Temple of Aphrodite with his testes if she’ll marry him. She declines, but he says, “I will put my trust in time…and in your poems, Sappho. One day, you will decide to come out.” So this isn’t a movie so much as one of those “It Gets Better” videos.

Sappho’s girlfriend Activia is outraged by Hyperbole’s marriage proposal, and demands that her BFF stay away from boys. Sappho looks abashed and murmurs, “They must have made you suffer very much.”

“I hate them,” Activia snarls. “They dazzle you with their insolent glances.”

While I can’t speak on behalf of every man on earth, I’d like to take this opportunity to offer my personal apologies to all you ladies out there. Honestly, I didn’t mean to dazzle you; it just happened.

Hyperbole rides back to the palace, where the Lesbian King is in a rage. It seems that all the men’s workshops are rebelling against him, just because he likes to wear a two-foot tall henna-rinsed beehive hairdo.

That night, the RA wanders around the Temple doing a bed check, but that doesn’t stop the girls from sneaking into Sappho and Activia’s dorm room to gossip; unfortunately, their gab session is interrupted by Kerwin, who staggers inside and faints on Sappho’s bed. Well, it’s not the first time a pantsless dude has passed out in a sorority house (or maybe -- considering this is the 5th Century B.C. -- it is, and we’re seeing History in the making).

Naturally, Activia wants to narc on Kerwin, but Sappho prefers to commit blasphemy by stashing him in the Altar of Aphrodite, which historians believe was the first slang term for "vagina" to appear in the Urban Dictionary (then called the City-State Lexicon). The other girls are torn; some want to report him to the house mother, while the others want to keep him around so they can try out some of those tricks they saw in Puppetry of the Penis.

Sappho decides to secretly nurse Kerwin back to health and almost immediately regrets it, because he’s like one of those husbands in a cold remedy commercial, whiny and demanding, making her bring him water and listen to his boring speeches about “freedom,” presumably the freedom of movement genitals enjoy in his pantsless sub-culture.

Activia is jealous of the interest Sappho shows in Kerwin’s all-too-visible area, so she puts on a nude see-through mini-tunic that displays her nipples in bold relief, and goes to confront him, giving us the film’s first fight scene—the age-old battle between the Area and the Areolae. She reveals that Sappho is the niece of King Beehive (true) and is planning to betray Kerwin (false). Kerwin believes her, thereby only scoring 50% on the quiz.

But that doesn’t stop him from kissing Sappho in front of the sunset backdrop from the Sears Portrait Studio, then panicking when the breeze sounds kind of weird. Sappho takes him by the hand and leads him to the “lips” of the “Cave of Lesbos,” which is guarded by the fearsome mythical beast, “the Clitoris” and is extremely damp inside, filled with foaming pools and gushing waterfalls. Even though he’s a Lesbian, all this oral sex innuendo gives Kerwin a bad case of performance anxiety, and he decides he’d better get back to this men’s encounter group, especially because it’s “Sweat Lodge Saturday" and he pre-paid for a seat.

Sappho covers Kerwin’s escape by making out with Hyperbole, but he spies one of Kerwin’s discarded Hercules Power Wrist-Bands®, and inexplicably stuffs it into his crotch. He informs Sappho that since she kissed him she now has to marry him. This seems like an exceedingly strict rule, and explains why so few Lesbians ever agreed to neck with me.

The Lesbos Chorale kicks in again as Kerwin maneuvers a tiny rowboat into a cave full of mermaids with blonde dreadlocks, where he chokes and faints as the mermaids transform into pelicans. Then Sappho suddenly wakes up, and we realize her therapist isn’t going to get any decent spank bank material out of this week’s dream analysis.

The next day, Hyperbole’s spy tells King B-52 how much the people hate his stupid hairdo, and we see the spy is really…Kerwin! So, he’s a Lesbian by day, but a pants-free Iron John enthusiast by day-for-night!

Sappho leaves the Temple, and Activia is so depressed that her roommate’s getting married that she climbs down into the lion-filled ravine and commits suicide by stock footage.

Kerwin rides around with Hyperbole in his Trojan drag, and they go bug Sappho at work, where she’s painting frescoes on the temple of the sea goddess, because air-brushing custom vans hasn’t been invented yet. Hyperbole notices the two macking on each other the instant his back is turned, and immediately remembers that sweaty leather wristband he stuffed down his adult diaper in an earlier scene.

Hyperbole ambushes Kerwin at Sappho’s house. Kerwin is defiant, basically yelling at Hyperbole, “Ha! I totally kissed your girlfriend!” and “Catch me if you can!” Turns out he can. Kerwin jumps off a wall and is instantly hogpiled at the bottom by Hyperbole’s men, making this the fastest action sequence in film history (32 feet per second per second).

Kerwin is exiled from Lesbos and sent to the Island of Misfit Male Leads, but he just turns around and comes back, which is why I've always believed those Havahart traps never really work.

Kerwin and his encounter group show up outside the gates with the World’s Most Phallic Battering Ram (it dangles from a sort of wooden pubic triangle and thrusts in and out like it’s planning to dry hump the city), and after a hard-fought 43-second battle, overthrow King Hairspray.

But Sappho has already skipped town, announcing that from now on, "She will dedicate her life to the Temple’s young ladies.” And if she’d done that from the beginning, this would’ve been a much more interesting movie, and probably wound up in heavy rotation on Cinemax After Dark.

But Kerwin won’t take gay for an answer, and goes back to the Temple, where he and Hyperbole get into a sword fight, if you know what I mean. But they lose their footing while roughhousing on a wall, and fall straight into the lion footage.

Kerwin waits until a big cat mauls Hyperpole to death, then he sneaks up and stabs it in the back. Naturally, this sight turns Sappho straight, and the two of them go back to the Sears Portrait Studio and kiss awkwardly in a chariot in front of the sunset backdrop. 8x10s and wallet size prints are available in the lobby.

“I hate them,” Activa snarls. “They dazzle you with their insolent glances.”

Not coincidentally, this is also why everyone hated the Twilight movies.

Big props to the Kerwin for getting a 50%, though. He deserved it after studying so hard.

Your movie reviews are so much more enjoyable than the original artifacts.
~

"I get to fight the lion. The lion is in the contract."

Kerwin must have had some major mojo: he got two lions in his contract!

... which is guarded by the fearsome mythical beast, “the Clitoris”

Aye, few men have faced the dread Clitoris, and fewer still have lived to tell the tale.

Now, excuse me while I go practice my insolent glance. Being married, there's not a great deal I can do with it, of course, but a judicious bit of dazzling could be right handy in certain situations.

We caught Tina a few years ago in Anthony Mann's God's Little Acre and she was surprisingly effective as Griselda Walden. But she towers over her male co-stars (she's over 6') which makes for interesting blocking in certain shots. I wonder if this is one reason why she didn't work more in higher-profile pictures. She was glamorous as hell and had serious acting chops.

There are days, nay, whole weeks when I feel like I've fallen into the lion footage.

"...the fearsome mythical beast.." But, the Clitoris is real, REAL I tell you! Pay no attention to those stories about fire-breathing or eyes that shoot lightning bolts... they're strictly right-wing propaganda.

Other than that everything OK?

Why do I have to find out about all the cool new releases here?


"... when suddenly Kerwin and the Greek Anti-Pants League are attacked by the USC Marching Band, who are in a crappy mood because they’ve forgotten the lyrics to 'Tusk.' "

Though I wonder if Trojan was a brand-name back in 1960... and whether this was an early example of product-placement in "films."

The Trojan brand dates back to the 19th Century, so yea, it was around.