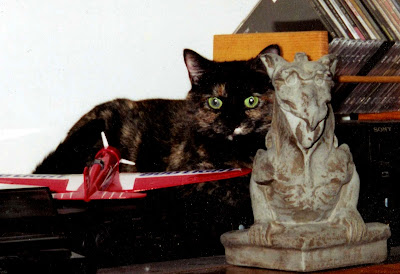 Like all her clan, she was a unique, often endearing and at times frustrating creature. Things just aren't the same, without this cantankerous gremlin who I suspect was a grande dame in some former life, as well as this one.
Posted by Scott at 10:52 PM

What a beautiful girl. My deepest condolences, Hank. I've lost five cats across the course of my life, and there isn't a one I wouldn't give up a kidney to spend another day with in full health.

Eloquently put. I'm fairly new to the concept of loving or pet friends as much as we do, but I related closely to your warm story. Thanks for sharing the sad moment.

I want to say something profound and witty, but I can't think of a thing. I'm so sorry for your loss, I know how badly it hurts!

That's as fine a loving, admiring, descriptive tribute to a splendid personality as any grand duchess could desire, Hank. We had a small, dark calico that had some of those same imponderable qualities -- the self-containment, the unflappable intelligence, the gift for finding unexpected cozy places removed from the vulgar hurly-burly of daily household doings. I was nodding to myself all the way through your post. All my sympathy.

Thanks, everybody, for your kind words and sympathy. They mean a lot to me.

Hank, my first dear little cat was a tortie like Smudge. Unlike Smudge, she had a lame name. I blame my mom, who taught her to come to the name "Kitty". I wanted something more LOTR like, but it was not to be. She was my best friend for 19 years. There is something special about torties. When I got her, we already had a miniature (not toy) poodle who just loved her to death. She was terrified of him. In no time at all they became great friends and when he passed, she would tolerate the others who came after, but that's all. She was a one dog cat.

Losing your fur baby is never easy. It never will be easy. But, thinking about how awesome they were during your time together, makes it hurt just a bit less.

There is something special about torties.

Our vet called it "tortitude". And Smudge had it, in spades.

I remember now that I was wrong about her not doing cute cat tricks. She did have one: In the winter months we keep a knitted afghan at the foot of the bed, and she loved to burrow under it until she was completely hidden. Of course, the loud purr coming from that lump in the afghan was always something of a giveaway ....

Kitty sounds like she was a great cat, too.

What you wrote reminded me of Puck the Van cat, who was very attached to our dog Pete. Heck, they were almost a matched pair, since both of them had fluffy white fur with winter-grass-tan spots.

The two slept and played together. Their favorite game was enacted in the kitchen, where Puck could take advantage of the linoleum floor: He would flop on his side and try to scoot under Pete, while he attacked his legs and batted up at his belly. And Pete would respond by dancing aside and nipping at him playfully, tail furiously wagging all the while.

Puck, though, was perfectly willing to strike up a new friendship with the next dog that came into our household, about a year after Pete passed on. I believe he really missed the old fellow, and was terribly disappointed that Blanche didn't know the scoot game. Nor did she show any interest in it. (In fact, Blanche almost backed out of her harness that day I rescued her, when I brought her in the house and the first thing she saw was Puck and Smudge sitting there side by side, a few feet from the door. She regarded both of them with obvious mistrust, but fortunately, she adapted quickly.)

Looking back, I'm not so sure why all our dogs' names were so conventional. The reason why we named this one "Blanche" was that shortly after being rescued, the tests came back from our vet and we found out she had heartworm. [Cue smell of rapidly combusting wads of cash.] So she really did depend upon the kindness of strangers, not just for a home but her continued existence.

Thanks for the memories, Mary, yours and the ones you evoked. We've been through this more times than I care to count, and it never gets any easier. But you're right that remembrance helps, even if moistens the eye.

I think that's the thing that got me the most when my best cat passed.

Anyway, no trite saying or deep insight will help. Only time...