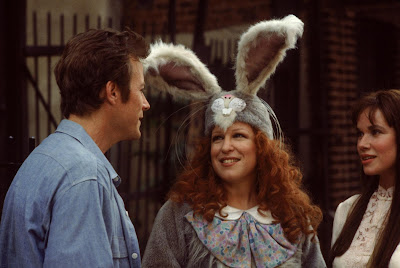 John Heard turned in a multitude of fine performances over the years (as witnessed by the fact that Sheri and I only wrote about one movie in which he appeared, and he wasn't even the star), and I always thought it was too bad his career didn't start earlier in the 1970s, when mainstream movies were riskier and more indie-like, and better equipped to take full advantage of an actor I like to think of as the WASPy Richard Dreyfuss.

Anyway, please take your seats; the service is about to begin...

Ahem! Our reading today comes from the book of Better Living Through Bad Movies. Chapter 6: Chick Flicks vs. Ick Flicks...

Bette Midler is rehearsing for her big concert at the Hollywood Bowl when she gets a message that causes her to abandon the gig and head to San Francisco. As she drives and cries, we ﬂash back twenty or thirty years (depending on how old we are supposed to believe Bette Midler is); voila, we’re at Atlantic City, and Bette is TV’s Blossom. Back then she was a foul-mouthed, histrionic, whiny show business brat—and a much more interesting performer. She’s smoking under the boardwalk when she meets a lost little rich wuss named Hillary. Blossom forces Hillary to watch her bump ’n grind version of “Glory of Love” before she’ll take her back to her hotel. Hillary likes Blossom’s singing. Blossom likes it that Hillary likes her singing. So, the two girls become friends for life.

They are the best of pen pals until they’re 21, when Hillary turns into Barbara Hershey and comes to New York to escape her sheltered life. Bette invites Barb to share her squalid apartment, and it’s a festival of sisterhood as the two women dye their hair together, sing Christmas carols, do each other’s laundry, and synchronize their menstrual cycles.

To pay the rent, Bette dresses up like a killer rabbit from Night of the Lepus and delivers singing telegrams to John Heard. He is so impressed that he invites her to audition for the play he’s directing. Despite the fact that John’s production is so off-Broadway it’s actually in the Hudson River, Bette falls in love with him. But he only has eyes for Barb (actually, his character seems kinda light in the loafers, but the movie claims he’s smitten by Barbara). Following Bette’s triumphant debut in John’s weird musical about evil mimes, Barbara helps John celebrate by sleeping with him. Bette shouts at Barbara, “So much for you and your feminist principles!” and tells Gloria Steinem to revoke Barbara’s NOW membership on account of hussiness. Barbara explains that she couldn’t help herself, since John Heard was “the most attractive man I’ve met in my life.” It seems she really did live a sheltered existence.

Barbara returns to San Francisco, so, it’s back to letters and over-dubbed narration to let us know what’s happening in their lives. Bette becomes a Broadway star. (It seems surprisingly easy—one day she just is one. I don’t know why more people don’t do it). Barbara becomes a socialite and marries a jerk. Bette counters by marrying John Heard.

Barbara visits New York to see Bette’s musical about the invention of undergarments, and to be bitchy. John Heard is still attracted to Barbara, which infuriates Bette, but since he is also suffering from “A Star is Born Syndrome,” we already know this marriage is doomed. The two women have a shouting match in a department store, and the friendship is over.

Life goes on. Bette goes home to mother because John wasn’t paying attention to her. Mother tells her that everybody is tired of paying attention to her, and she should just get used to it. (No, this doesn’t mean the ﬁlmmakers realized that the audience is bored and ended the movie—it just means that you have Bette’s mother’s permission not to pay attention to Bette anymore.)

Bette’s career goes down in ﬂames when she punches a director who says she has a fat ass, and she’s reduced to singing at a boarded-up disco. Barb ﬁnds her and apologizes; she explains that she was just jealous because she can’t yodel. (Really.) Bette’s still mad until Barb confesses that her husband left her and she’s pregnant. So, with Barbara’s life ofﬁcially worse than Bette’s, Bette forgives her and the two have a baby-prep montage.

But when Bette’s agent ﬁnds a role for her, she’s outta there! The two women scream at each other, but a diva’s gotta do what a diva’s gotta do and Bette returns to New York. She learns that the job is in John Heard’s new production, and he gave it to her out of pity. So, now she is James Mason and he is Judy Garland! But then Barb has her baby, which makes everything okay for everybody. (Remember, babies solve all problems—have one today!)

Barbara’s daughter, Victoria, is now about six. Bette is a Broadway star again (as demonstrated by doormen congratulating her on her Tony wins). Barb is a noble lawyer (as demonstrated by other lawyers chiding her for high morals). Everything is going great when Barb gets dizzy and has trouble with drinking fountains…

Yes, she has a fatal disease. Bette volunteers to accompany Barb to the beach for her last summer (she just didn’t know how long this summer was going to be). Bette and Victoria don’t get along at ﬁrst, because they’re both bossy, self-involved drama queens, and they’re both six. But Bette teaches Victoria how to smoke, cuss, and sing in bath houses, and the two bond, leaving Barbara feeling left out and unloved. Barb tries to get back at them by looking pale and sickly, but they don’t notice. So, she escalates her aggressive dying by refusing to speak, move, or bathe. She and Bette have another ﬁght, which causes Barbara to snap out of it (the moping, I mean—not the dying), and they braid each other’s hair, play cards, and do other girly stuff for the rest of the summer. Bette even agrees to not sue Barbara for failing to die as scheduled, and goes back to being Bette Midler, Super Star.

She is preparing for her Hollywood Bowl concert when Barbara ﬁnally starts to get somewhere with the dying (this is where we came in). When Bette gets to the hospital, Barbara tells her that she wants to die at the beach in order to make the whole movie so gosh-darned poignant that nobody will be able to stand it. So, Bette sings “Wind Beneath My Wings,” we see some lovely sunset ’n surf images from a K-Tel commercial, and Barbara ﬁnally bites the sand.

The ﬁlm seems to heave a sigh and wipe a tear as it treats us to a ﬁnal ﬂashback of the 11-year-old girls vowing eternal friendship while Bette belts out another musical tribute to aerodynamics.
Posted by Scott at 12:20 AM

I've never seen Beaches and now I know why. Thank you so much! :)

You're welcome, Debbi. And I beg you to heed this warning.

I'll have to second what Debbi said in her first comment, as it would have been very close to what I had said had I gotten here first...

I should thank you Scott for confirming once again that my internal movie governor has been programmed well and as such has rarely if ever let me down...

The sad thing is, my movie governor is tuned to a similar sensitivity, yet our business model requires that I ignore it.