How It (Probably) Happened One Christmas

The place: The office of some network tv executive who greenlights bad ideas. A brainstorming session for a new Christmas special is taking place. Let's listen in, shall we?

"Hey, I've got a great idea. Let's remake It's A Wonderful Life!"

"Are you nuts? That's a movie classic."

"We're doing it with a twist: we're making the George Bailey character a woman."

"Oh, so it'll be a modernized version with some feminist take. That'll be interesting."

"Well, that could still be interesting, since a woman's options in the 40's were very different from a man's. It'll change the story in big ways."

"Um, no, we're keeping the exact same story, even a lot of the same dialogue."

"But...that's preposterous. Why bother setting the story in the 40's if you're just gonna pretend gender equality already happened?"

"Oh, well, maybe it could still work, if you get a female lead who's of the same caliber as Jimmy Stewart. Who do you have? Anne Bancroft? Shirley MacLaine? Jane Fonda? Diane Keaton? Marsha Mason?"

"Are you kidding? This is TV, we could never get one of them."

"Then I guess we're stuck with..um, what about the male Donna Reed?"

"Damn, I knew that was too much to hope for. In any case, a big part of the original film's appeal was that romance between George and Mary. Donna Reed was like, the perfect woman. If George could be married to her, and still contemplate suicide, you know he's in big trouble and needs divine intervention. So, who's the guy you found to fill that role?"

"We've got Cloris Leachman in the Clarence role."

"Ah, Oscar and Emmy winning Cloris Leachman. That should give this thing a shot in the arm."

"Speaking in a silly Cockney accent."

"What the fuck? Why? Wait, is this a parody? Is Mel Brooks writing it?"

"Damn, I knew that was too much to hope for. Okay, who else?"

"You're sure this isn't a comedy?"

"Finally some casting that makes sense. Um, he isn't, by any chance, direct--"

"Damn, I knew that was too much to hope for. Is there anything that might sell this remake to an audience?"

"We think it would make a great companion piece to that remake of Miracle On 34th Street with Sebastian Cabot."

"In fact, we were thinking of releasing them on videocassette next year. In a box set. The Beta format, of course."

"Beta? But that's...you know, actually, releasing those two together on Beta is the perfect way to preserve them. The only way, in fact." 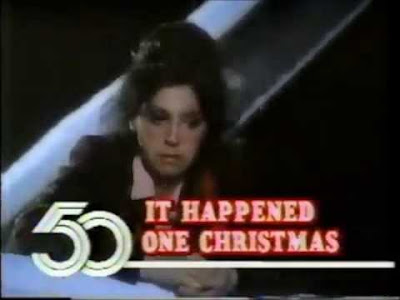 The Hallmark holiday movie season is upon us. Beware.
Posted by Scott at 9:45 AM

Next you can do the no doubt crappy live TV remake I've heard is coming out. BTW, Donna Reed was a lovely person. She lived in the town I grew up in, shopped in the same stores as all our moms. She had her own TV show then, which we watched, but we seemed to have trouble separating the mom in the deli from the star on TV. I didn't see It's A Wonderful Life until art least 15 years later and I still remember startling the theater audience (and my date) by declaiming, "Hey, I know her!"

Bill S., darlin', I never cease to wonder at the ways in which your mind works... Skeers the living shit outta me, but in wunnerful ways.