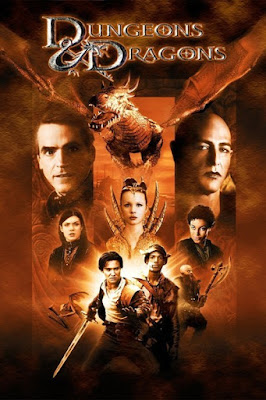 According to the inevitable narrator who opens the film, we’re in the Empire of Klezmer, or something, where the Mages control all the world’s magic through tax cuts, allowing nothing to trickle down to the Commoners except cabbagey-smelling urine and night soil tossed from a tower window. But Empress Thora Birch is a populist who wants Single Payer Magic for all. [Note: Jeremy Irons, who took the Pro Dragon position in Eragon, will be taking the Con position in this film, because that’s how we roll in Debate Club. ]

Okay, I’m just going to warn you: there’s a whole lot of phallic symbols in this thing. The Empress has a Scepter that controls the Golden Dragons, which are mythical reptiles that presumably run a Chinese takeout place, but she really wants the Rod of Savrille, which controls the Red Dragons, which are mythical reptiles that I'm guessing operate a Tae Kwan Do studio.

We open in a Dungeon, and yes, there’s a dragon. This might not be a good movie, but it’s scrupulous about compliance with the Federal Trade Commission’s Fair Packaging and Labeling Act. Jeremy and his slave race of Uncle Festers are using a big gyroscope to create a magical pizza cutter that will let him control dragons, overthrow the Empress, and neatly quarter deep dish pies. He is assisted by his chief henchman, a kind of Super-Fester, who wears white lipstick, suggesting that before he turned to Festering and Henching, he was a Ronette, or possibly a Shirelle.

Jeremy is a human Cuisinart in this film, and has set his Scenery Chewing to “Pureé”. But despite all the overacting, the pizza cutter shorts out, and Jeremy has to kill the dragon by slamming the garage door on it.

Outside, we meet our two lovable rogues, Ridley Freeborn, played by Jimmy Olsen from Lois & Clark: The New Adventures of Superman, and Marlon Wayans, of the Way Too Many Wayons Family. I know this film is based on a table top RPG game and all archetypes need to be represented, but after 30 seconds of witless dialogue I really wish these guys would beg a do-over from the Dungeon Master and reroll their characters.

Anyway, they’re upset that dragon blood has set the river on fire, something you don’t usually see outside of Cleveland, so they decide to go burgle Hogwarts.

Meanwhile, Jeremy is demanding the Imperial Council take away Thora’s Scepter. No one else seems all that concerned about the Scepter custody issue, and with Jeremy’s acting still stuck on frappé, his unctuous evil and spittle-flecked energy seems less sinister than just weird and inappropriate -- sort of like Emperor Palpatine creeping around the back room of the Sizzler so he can menace a Chamber of Commerce luncheon.

Thora’s Bearded Advisor (every fantasy queen is issued one) suggests she just swap out the Golden Sceptor for the Rod of Savrille, which is cooler anyways because, I guess, it’s cordless? But Jeremy is eavesdropping with surveillance fairies, and he orders Super-Fester to beat them to the Rod.

While Thora’s Beard struggles to read a map by throwing tiny atomic bombs at it, his Apprentice Beard, Marina – sadly, not the sexy mermaid puppet from Gerry Anderson’s Stingray – catches Jimmy Olsen and Marlon Wayans pilfering magical crap. Suddenly, Super-Fester shows up with some Medieval Times employees and kills the Beard, but Marina summons the map, then opens a portal and they all jump into a pile of garbage, which seems redundant. They meet Elwood the Dwarf (who’s just as tall as all the others, but I guess he identifies as Dwarf), and then they jump from the garbage dump into a sewer, beating me to the punchline yet again.

They go to a tavern, where they feast family style and infect the bottomless breadstick basket with fecal coliform bacteria. Jimmy and Marina are sucked into the map by advanced TRON technology, and learn that they need to find a ruby called “The Eye of the Dragon” which lies at the center of the “Antius Guild Maze” because we’re playing Dungeons & Dragons, remember, so I hope you brought your 8-sided dice.

They travel to a Frank Frazetta painting, where Marlon tickles our funnybones by wearing shoes on his head. The ruby’s owner is Richard O’Brien from Rocky Horror, and for the two minutes and 42 seconds he’s on screen, this is actually a fun movie. 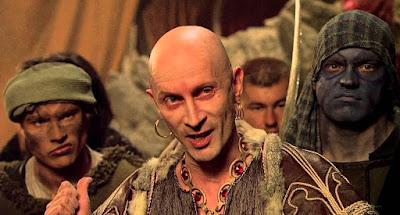 Richard agrees to give Jimmy the Eye of the Dragon if he makes it through the Maze, but caveat emptor, every other wannabe Theseus has died in the attempt. Now roll Initiative!

Jimmy survives the maze – it’s actually kind of a short maze, about the length of the ones you find on the back of a Denny’s kid's menu – and gets the Eye of the Dragon, but Super-Fester captures Marina and tortures her with a pair of prehensile earbuds while the others are arrested by the beautiful Norda, who is both a tough, by-the-book Elf Cop and, I’m pretty sure, a Quinn Martin Production.

She lets Jimmy and Marlon break into Fester’s castle. Jimmy goes to find Marina, Marlon goes to find the map, but the area rug turns into cake batter and he gets trapped. Marlon slices Super-Fester’s throat from ear to ear, but Fester is a clumsy shaver and used to exsanguinating neck wounds, so he just chases him around the castle like a harassed Dad trying to put a diaper on an uncooperative toddler.

Fester kills Marlon, then stabs and is about to kill Jimmy, but Marina shoots some Sith-style lightning at him, then opens a portal so they can both escape. It might have been nice if she’d done that before the black guy died, but hey, a trope’s a trope.

Since Klezmer still doesn’t have a Canadian-style single payer plan, Norda takes Marina and Jimmy to Tom Baker from Doctor Who, an elderly Elf who lives atop a huge hollow Christmas tree, and presumably leases out the ground floor to the Keeblers.

Elf Tom heals Jimmy, then lectures everybody on how humans suck, because while Elves use their powers to maintain the delicate magical balance of all life, we use ours to make crappy movies.

Jimmy is in the grip of despair, believing that his friend died for nothing, but is somehow able to find the courage to French kiss Marina while Marlon’s corpse achieves room temperature.

Some guy we’ve never met before wearing a Phantom of the Opera mask gives Jimmy a magic sword because why the hell not? It’s an hour and twenty minutes into the film already, and “magic sword” really ought to have been on the pre-flight checklist.

They get to the entrance of the Dungeon (apparently the previous one was just a warm-up dungeon) but only Jimmy can pass through the force field to get inside. He will have to brave the deadly dangers within, and confront his fate alone, but his companions seem cool with that, and give him a Yeah, Whatever wave as they saunter off to Craft Service.

(To be fair, Marina does bother to tell Jimmy to “be careful,” which fills me a glimmer of hope, because that’s the last thing Jimmy said to Marlon.)

Jimmy falls screaming into a hole, puts the ruby into a sconce, reveals a secret treasure room…Stop me if you’ve played this D&D module before. And if you have, what was it like being a virgin all through college?

The Rod is in the bony hands of a skeleton. It’s Savrille himself, who’s been cursed to spend eternity delivering exposition to Flavor of the Month pretty boys who will blow their one shot at franchise movie stardom. Skeletor tells Jimmy that anyone who uses the Rod will suffer a terrible fate, which is corroborated by a bunch of depressing murals.

Meanwhile, back at the Chamber of Commerce, a flock of Golden Dragons are approaching, so Jeremy convinces all the Mages to cast Magic Missile. It doesn't seem to do much, but on the bright side it's nearly as funny as that YouTube of a guy in a kilt and a peasant blouse flinging beanbags and screaming "Lightning Bolt! Lightning Bolt!"

Jimmy emerges from the Dungeon and finds Super-Fester has captured Marina (again), along with the others. He promises to release them if Jimmy hands over the Rod, but then afterward shockingly admits, “I lied.” The Elf and the Dwarf both break free and start kicking ass, which I assume they could have done earlier, but then we would have missed that great, “I lied” line. Fester goes through a portal to the Chamber of Commerce, with Jimmy in hot pursuit.

Jeremy goes up on the roof where there’s more elbow room for his acting and summons a bunch of Red Dragons, while Fester and Jimmy have a sword fight. Their blades glow purple and gold and shoot lightning and are so close to -- without actually being -- light sabers that you sense the power –  not of magic, but of lawyers.

Jimmy stabs Fester in the back, then throws him off the tower, while Jeremy throws his arms up and screams “Let their BLOOD…RAIN from the SKIIIIIIIIIES” while his entire body violently shakes, like James Brown getting up on the good foot. 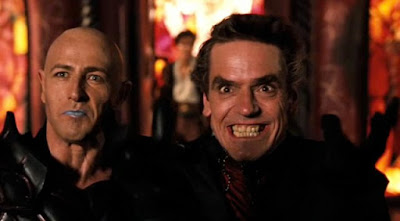 (You know, I used to think Jeremy’s bespoke, low-key performance as Alfred in Batman v. Superman was an acting choice, but having seen this film, I now think it was doctor’s orders; he really let it rip in Dungeons & Dragons, and goes into such a hammy spasm I'm pretty sure he ruptured his thespians.)

Anyway, Jimmy attacks Jeremy and gets his ass kicked, but he’s saved by Marina, who gets her ass kicked, then by Ellwood and Norda, who each check the Ass Kicked box.

Jimmy grabs the Rod and gets a crazy look in his eye, but then remembers Skeletor’s warning, and shatters it, sacrificing ultimate power and his deposit.

Jeremy gets eaten by a CGI dragon, then Jimmy and his companions go to Marlon’s grave, where they gang-fondle the ruby, and everybody transforms into Tinkerbell for some reason.

I know you're flushed with victory, conquest, and blood-lust, but your Dungeon Master asks that you take a moment to collect all die, stat sheets, and golf pencils, while his mom asks that you not leave any pizza boxes in the basement, because it attracts silverfish.

[NOTE: If you enjoyed this nonsense, much more can be found in our book, Better Living Through Bad Movies]
Posted by Scott at 1:36 PM

Y'know, if Ivanka hadn't cost me my pain management, I might actually enjoy this turd, if only for the bad dragon-mation. How you slog through these clusterfucks for us, Scott, I've no idea, but you deserve a Purple Brain, or Purple Eyeball or something... or a fifty-gallon drum of clorox, at the very least.

This review is much, much more entertaining than the movie. Saving throw to not laugh: failed badly.