I've been really remiss in the birthday department lately, but that's only because I've been remiss in every department of life; and while some friends caution me against spreading my laziness and incompetence too thin, I'm having a good day and feel like I still have more to give! Or withhold! Whatever.

Anyway, today's a Twi-Night Doubleheader, with Corsican Twins Bill S. (Wo'C contributor and He Who Must Be Referred To For The Next 24 Hours as Bill S! under penalty of law) and The Minx!

And okay, yeah, when we phrase it that way it does sound less like a birthday party and more like an action-packed comic book issue about a superpowered heroine dropping in on an unusually exciting Alcoholics Anonymous meeting and getting in a fistfight with a super villain near the coffee urn. But what if I said there was cake? Hmmm...? And what if I lied, and really just meant there's dessert? And what if I stretched the definition of "dessert" to the point where we all just collapse on the ground and start eating grass like a dog trying desperately to cope with intestinal worms? Because that's the World O' Crap Birthday Way?

There were a lot of disgusting crypto-desserts on Pinterest, but I went with this one because Elsie the Borden Cow is something of an unofficial Wo'C mascot, having made her debut in s.z.'s very first post, way back in Ought Three. And since I can't cook, I figured it was safest to go with a "no cook", "no bake" recipe. Plus, it's "thrifty," and who doesn't enjoy that on their special day? Why, I've lost track of the times I've come home after a hard day at my imaginary office, smacked my lips meditatively and announced, "Mmm! I'm in the mood for something thrifty!"

So as the ad says "Why not try this salad today?" Well, there's literally a million reasons, but I'll just go with #45091: "If your aim is to poison a Russian refugee you're better off just putting a nerve agent in his tea, because he's gonna see this shit from a mile away."

Still, I'm pretty sure I can pull this off, because my Grandma actually used to make a version of it for Thanksgiving, except she suspended the cottage cheese in the lime Jello, rather than having it erupt out of the interior like so many maggots, and there was no tuna, because I guess she never really got over the Depression.

Okay, let's see...Package of lime gelatin...Yeah, that'll taste like crap, but at least it'll toughen up our toenails. Hot water...vinegar...salt...Mm, tastes like dessert already. Tub o' cottage cheese...Mayonnaise... Chopped celery...Y'know, this is more complicated than I thought. I need some volunteers from the audience -- someone chop the onions, someone thinly slice the radishes, and someone drain and flake the tuna, okay? Just think of it as an Amish barn raising, except afterwards we'll eat the barn and it'll taste disgusting.

Wait, there's a problem...My store doesn't carry Borden's. Damn! And despite that tone of blasé assurance at the bottom of the add, I don't have my own Borden's Man. Do any of you have your own Borden's Man? And if you do, will you unchain the poor bastard and let him out of the basement to help me?

No? Fine. Okay, change of plans, let's just tune into Borden's TV shows, "The People's Choice" and "Fury."  I can't seem to find them on my cable guide, but I'm sure Ivan can explain what the hell they're about. (By the way, Thrilling Days of Yesteryear has moved, so please adjust your bookmarks accordingly.)

Okay, instead of the Cottage Cheese Tuna Salad, how about we all just wish The Minx and Bill S! a very happy birthday, and we'll call it even. 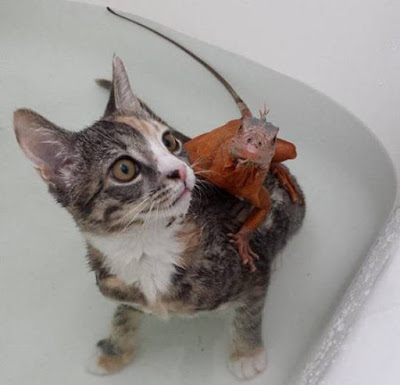 And because The Minx is also the human companion of Famous Internet Cat ZoeLuna, there's a bonus damp cat in the pic. Enjoy!
Posted by Scott at 4:52 PM

It's the funniest thing—no sooner have I finished a bodacious feed of take out Chinese cuisine (obtained from our local take-out jernt, The Golden Panda...and if you think I'm going to drop my lawsuit because there's no panda on their menu you've got another think coming) when I open a fortune cookie to reveal this message: "We're needed, Mrs. Peel."

Fury was a popular children's show that aired Saturday mornings on NBC from 1955 to 1960. The titular character was a magnificent black stallion, who for reasons not completely clear would only obey the commands of an orphan kid named Joey (played by Bobby Diamond). Joey, a would-be juvenile delinquent, is taken in by rancher Jim Newton (Peter Graves) in the series' inaugural episode and comes to love the fiery horse like his very own (but not in the way that I'm sure some of you are snickering about right now). It was the first important TV effort for Graves, who ran the Broken Wheel Ranch at the same time his brother James Arness was riding herd in Dodge City on Gunsmoke; the co-stars on Fury were William Fawcett as Pete, the crotchety comic relief ranch hand, and Ann Robinson as schoolmarm Helen Watkins (who, if the [always reliable] IMDb is to be believed, was only around in the first season—which are the source of the only episodes I've watched).

The People's Choice was a more adult show...though you couldn't tell from the premise. A prime-time sitcom (created by Irving Brecher, who was also responsible for The Life of Riley and two of the Marx Brothers movies) starring former Our Ganger Jackie Cooper, Coop plays an idealistic young chap named Socrates "Sock" Miller, newly elected to the city council of the fictional New City, California. (Google it.) The hook of the show is that Sock has married lovely Mandy Peoples (Patricia Breslin), the daughter of New City's mayor (Paul Maxey)...but their coupling has to be kept on the Q.T. and strictly hush-hush because Sock has aspirations of becoming a lawyer and wants to be independent, financial-wise.

Choice had an odd fantasy element in that Miller owned a basset hound that answered to "Cleo"...whose inner thoughts could be heard by the viewing audience and was voiced by actress Mary Jane Croft. Choice managed to stick around on NBC for three seasons and eventually Sock and Mandy's secret coupling was out in the open...with no one really giving a rat's ass (besides, the mayor and Sock's Aunt Gus [Margaret Irving] had tied the knot during the course of the show's run). The sitcom was produced by McCadden Productions, George Burns' production company; George must have had a jones for creatures that could talk because he also owned a piece of Mister Ed (talking horse) and his son Ronnie later starred in a sitcom called Happy, which featured a talking baby. (I had a member of the TDOY faithful send me some episodes of Choice many years back and while it was relatively inoffensive as far as sitcoms went it's nothing you need to set the DVR for.)

I hope I was able to clear things up...and happy birthday to both Bill S. and Her Minxship!

Thanks, Ivan! It's a little hard to imagine Graves as a he-man rancher. Thanks to all those Corman films I always picture him wearing a lab coat, somehow managing to look both smug and befuddled...

If you have a better idea, I dare you to post it!

The Borden Man could be a sort of variation on the Easter Bunny: a magical being who leaves cottage cheese in the shoes of good little boys and girls on [holiday to be determined] morning. Or maybe if you put an open can of tuna by the hearth before you go to bed, when you wake up you'll find he's replaced it with a container of Borden's.

By far the creepiest part of that ad is the maniacally gleeful expression on Elsie's weirdly foreshortened face, as she presents some luckless group of diners with a dish which looks like it was modeled on one of the Jolly Green Giant's zits.

You always do the best birthdays, Scott. Plus we got an exegesis on antediluvian TV shows from Ivan, and Mary's folk tale. It's a veritable smorgasbord.

Happy birthdays, Bill S. and the legendary Minx! (Which is still one of my favorite nouns.)

I described the Borden's dish to my wife and she said that is sounded delicious. I have always been frightened by her fondness for jello.

I won't go so far as Bill Cosby (in any respect) and say that there's always room for Jello, but it definitely has its place. But one of those places is not, in my opinion, as a Trojan horse for cottage cheese.

Ugh. Cottage cheese. I would love to know the etymology of "curds" and "turds," and see which one was spoken first... It's not that the cottage cheese APPEARANCE skews scatological, necessarily, but it's not exactly appetizing. Which may be why it became the self-flagellation fixation of Weight Watchers...

So sorry for missing so many birfdays of so many wunnerful Crappers, especially Minxie & Bill S., my favorite amateur-group-therapy nom de plume. That is one cocky little birfday lizard, with a very Travis Bickle tilt to its head, and that direct stare... The cat doesn't seem so much accomplice as facilitator, or that lizard has some very sharp toenails. At any rate, she (the lovely tri-color) seems to be looking at a human with a very "What. Tha. FUCK. ?!?!?" face. Wishing Minxie & Bill all of the love in the universe (though not as described on certain CC shows, bless Bill Nye's heart...), winning powerball tickets, and footrubs ad nauseum.