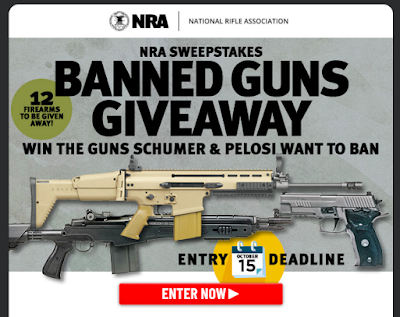 Somehow I've gotten on the National Rifle Association's mailing list, which is evidently a pretty easy thing to do; in fact, it took no effort on my part whatsoever. I was just in the wrong place at the wrong time and was struck by a stray missive fired off by Wayne LaPierre (literally, "Wayne the Peter"), who was furiously exercising Amendment Number One because he loves Number Two.


This has been the toughest year that gun owners have ever faced.

I understand gun victims also had occasion for complaint this year, but hey, they got what they had coming (bullets, apparently).

But names can never hurt you, Wayne! Okay, theoretically I suppose they could hurt your feelings, if you ever decided to develop any, but let's not get lost in wild hypotheticals.

But rather than take the easy path and give up the fight, you've stood tall with me and the NRA every step of the way.

Wayne's made-up version of me sounds so cool and heroic I almost hate to break it to him...


And as an extra way to thank you for your extraordinary commitment to freedom, I'd like to invite you to enter for YOUR chance to WIN in our NRA Banned Guns Giveaway!

That's right. While Chuck Schumer and Nancy Pelosi are trying to ban our guns, NRA is giving guns away – 12 world-class firearms that are sure to turn heads at the range and become the pride of any gun owner's collection.

This is a bit like those old entry packets Publishers Clearing House used to send, the ones with Ed McMahon's face declaring "You May Already Be a Winner!" You might, I suppose, although opening that envelope was far more likely to net you a paper cut than a million dollars. By the same token, Wayne (standing in for Ed's disembodied head) is offering me a chance to increase my chance of accidental death 7 times!


Entering is fast and easy. You can enter to win just one of these great guns, two guns, or even all 12 guns – the choice is yours.

Only you know how tired you are of living. Or how scared you are of dying. That's why we recommend use of the patented Old Man River Scale®. 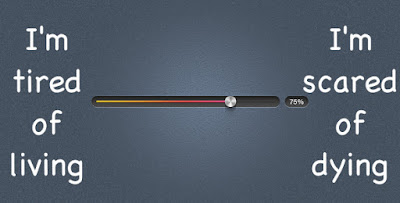 The great thing about this metric -- from Wayne's perspective, at least -- is that whenever the slider reaches 75% on either side of the scale, you're more likely to buy a gun.


No contribution is necessary to enter, however "with the most critical mid-term elections of our lives less than seven weeks away, NRA needs your support more than ever before."

NRA went on a bit of a spree in 2016, spending $54.4 million on Republican candidates and dropping over $31 million on Trump, but apparently from an insufficient height. And for whatever mysterious, ultimately unknowable reason (the black guy is gone) the NRA has fearmongered to diminishing returns these past two years, with member dues "plummeting".

And it's probably worse than reported, because I suspect (based on purely anecdotal, but extremely irritating information) that a lot of the "Life Members" on the NRA's roster are in fact participating under false pretenses, because they're dead.

After his father -- a Life Member of the NRA -- passed away, my step-brother Miles asked that Dad's membership be cancelled, by which he meant "stop sending all these goddamn fundraising letters because you're not getting another dime out of anyone in this house! In fact, I go to the trouble of writing 'Forget It' and sending back the enclosed envelope just so you get charged for the postage!"

Despite this air-tight reasoning NRA refused to comply, implicitly laying perpetual claim to any soul who signs their book (which now that I think about it is exactly how Satan acts in any film or story where someone makes a deal with the Devil, then gets cold feet). And you can see their point, because donations to the NRA depend on results, results depend on influence, and raw political muscle depends on sheer numbers, so naturally they'll do anything to inflate their rolls, even if the actual breakdown is something like "1.8 million Active Members; 2.2 million Auxiliary Members; 2.3 million Horizontal Members".


If they win, Schumer and Pelosi will move forward with an extremist anti-gun agenda that will rip the heart right out of our Second Amendment rights – including gun registration and gun-owner licensing…

JAMES MADISON: "When we said 'a well-regulated militia', we didn't mean go crazy and have, like, paperwork..."


The NRA is working 24/7 to get our message to gun-owning voters and STOP a gun-ban takeover of Congress. But to continue reaching out to American gun owners until the moment the polls close, we need your immediate financial support.

No, no, no, you've got this extortion thing all wrong! You don't say "I'm going to be a personal nuisance to you for the next 30 days, and I need your money to pull it off!" You say you'll do all that stuff "unless you pay me!" Hearing that you're planning to hassle me from now until Election Day and then every day thereafter because when have you ever stopped ever, whether I give you money or not so I might as well give you money, does not properly incentivize me, Wayne! I realize that's how negotiations work in The Art of the Deal, but here in the non-ghostwritten world, you gotta give Daddy a little something if you want that sugar.


That's why – even though it's not required and won't increase your chances of winning – I'm asking you to contribute $5 to NRA for each of the guns you enter to win in our giveaway.

See, that's exactly what I told you not to do, Wayne. It's almost like, despite all the times I've stood tall with you and not taken the easy way, you don't really respect me.


Please enter today for your chance to win – and to help stop a gun-ban landslide on Election Day that could cost us our FREEDOM!

SCOTT: What is "Things Ted Nugent would say while free-styling during a duet with Stevie Nicks"?


Thanks again for standing with me every single day of this fight.

I will stand by you as I have always stood by you, Wayne. Which is to say, slightly off to the left, wearing an expression of studied innocence and an "I'm With Stupid" t-shirt.
Posted by Scott at 6:04 PM

Email ThisBlogThis!Share to TwitterShare to FacebookShare to Pinterest
Labels: SpamSpamSpamSpam

help stop a gun-ban landslide on Election Day that could cost us our FREEDOM!

I'll be damned, they're really afraid. The kids have done it. The kids from Parkland and all who joined them in becoming politically active have scared the bejeebers out of the NRA!

Well, Wayne, too bad. I plan to help the kids and will watch with glee as that gun-ban landslide brings you down.

If only we could turn names into bullets.

...and have them fired by the adorable kitty in your avatar.

"Old Man River Scale" is... well, it's brilliant. And this fellow is truly unhinged.

Thanks, Alice. The I find myself in times of trouble, Oscar Hammerstein comes to me...

No, they all looked so good, I couldn't decide which one I wanted to be accidentally killed by.

Did you at least win a lovely parting gift? :) Hopefully, a non-lethal one.

And all those horizontal members are now eligible to have the guns torn from their cold, dead...look, just send money, OK? The ruble stream has dried up.

I'm envious. As much as I detest the NRA, I keep my life membership because it costs them money every month to send me the magazine that goes straight to recycle. But I don't receive any other mailings. I'll have to find a way to get back in their good graces, so I can cost them a few more bucks every year.

Thus far, not to be a dick about it or anything, but thus far, the gun nuts are seldom the Darwin Award-winners that they SHOULD be, by all rights... Maybe we should get Wild Turkey & the now-Canadian Jack Daniel's to sponsor their next rally or target-shooting event? Or just go straight for the now-commercially-available moonshine? Well, if we can get it with a healthy dose of saltpeter and birth control added, instead of just formaldeyhde...