Dying to Get Out the Vote

Our buddy Chris Vosburg writes to say that Hollywood is apparently taking tips from Cook County, Illinois, and has started granting suffrage to stiffs:


Although I've been an absentee balloter for more than fifteen years now, I'm nevertheless always duly apprised by mail of the nearest polling place for upcoming elections. Although this time it's just local stuff-- a handful of proposed city charter amendments, school board members and such-- I may actually show up in person at my designated polling place, for the first time in fifteen years. Why? Because this: 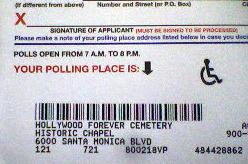 I've never heard of a cemetery volunteering to serve as such, although the often-alleged proximity of so many registered voters does make it seem a natural fit, I guess.

Of course, if you're familiar with the recent history of the Hollywood Forever Cemetery, you'll find it not all that surprising. As you may know, since rescuing the foreclosed and neglected site in 1998 for the drop-dead bargain price of $375,000, Forever Enterprises has been putting the "fun" back in "funeral" ever since by hosting a series of community outreach (FROM THE GRAVE!) projects such as the summer film series in which appropriately themed classic horror movies are shown on warm Saturday nights in an outdoor setting to picnicking graveside viewers, and a jolly little Dia de Los Muertos festival (in November, naturally).

Definitely the liveliest cemetery I know of. Isn't Hollywood wonderful?

Well, considering right wingers are still bitching about Daley stealing Illinois from Nixon in 1960, I can't imagine they'd be thrilled about extending the franchise to dead elitists.  Oh sure, there's the odd  reactionary remains to carry the Breitbartian banner; friendly HUAC witness Adolphe Menjou is buried in the Lake Section of Hollywood Forever, for instance, but I bet his vote would be canceled out by neighboring corpse and Committee for the First Amendment co-founder John Huston.  And John Wayne's body is a'molderin' in Pacific View Mortuary down in Orange County, so he wouldn't even be eligible to vote for L.A. school board members.  Suck it, Big Hollywood!
Thanks for on-the-spot reportage, Chris, and please give my regards to Hattie McDaniel's cenotaph.
Posted by Scott at 11:05 AM

Chris' review of the entertaining goings-on at his local restored garden of rest reminds me a little of the description of the black cemetery in "To Kill a Mockingbird", with the cheery home-made decorations on the gravestones.

The big municipal cemetery with landscaped grounds was a Victorian invention, and fit right in with that era's emphasis on funerary rites. The 19th C London cemeteries, with sweeping vistas, picturesque groves and rolling lawns, were designed for family outings. People would combine visits to family gravesides with Sunday picnics, being on more intimate terms with their deceased relatives than we are. I don't believe they encouraged them to vote, however. That would have to wait.

Hollywood Forever doesn't just do horror movies, they do classics ("Butch Cassidy & the Sundance Kid" is the one I saw there). It IS a fun thing to do on a warm summer evening.

As a last add, I'm personally offended by the idea of packing up dead people into a really nice walnut finished shipping crate-- and burying it in the ground. It's barbaric.

My family is on notice: when I go, strip me for parts, cremate the remains, pack them in a Teenage Mutant Ninja Turtle lunchbox and chuck it in the nearest dumpster.

I'm afraid I have a dark and, to many, deeply offensive disregard of the sanctity of the dead.

A friend once reminisced about the times she used to go golfing with "her late father" and I couldn't resist a good straight line, "wasn't that complicated, hauling his corpse around in a golf cart?"

She patiently responded that there were times she'd like to smack me right the fuck off my feet, and she meant it, and I apologized.

Passing the Hollywood Forever Cemetery on bicycle, it's all I can do to resist asking the folks I meet leaving the grounds, "so, still dead?"

Like I say, a little dark. Perhaps this is how I keep death at bay; by making light of it-- whistling past the graveyard.

"My family is on notice: when I go, strip me for parts, cremate the remains, pack them in a Teenage Mutant Ninja Turtle lunchbox and chuck it in the nearest dumpster".

With Much Love,
The Other Sister

Thanks, darlin, now I can die with a smile on my face.

Allow me to introduce to you all my younger sister Victoria, above, who is the smartest Vosburg of all, though she doesn't know it. Next thing I'll get my Mom to comment, or my brother. Then I can start in on the nieces.

Nice to know that if I have to attend your funeral, all I need to bring is a match.

Oh, man. Allow me to also introduce my older brother, Greg (above), who when he first logged into AOL mistyped his name as "Gerg" and despite many attempts to apprise AOL of the error and correct it, well, nothing doing, so he finally gave up and changed his name, with the aid of a lawyer, to "Gerg".

"It's easier this way," he said at the time.

Gerg, or as I call him, "Gregor", introduced me, back in the sixties and early seventies, to many of my favorite bands, and is easily my favorite drummer-- I played with him a couple times, and I'm tellin ya, he's the shit.

About a block and a half north of me on Vine, there is a yellowing poster of Gene Krupa in the storefront of the Hollywood Drum Shop, which Gregor and I posed for a photo in front of back in the sixties.

The poster is still there, and I keep trying to get Gregor out to LA for another photo shoot-- we're talking forty years later--, but to no avail (he's trapped in Maryland).

Thanks for that Gregor!

Well it's a pleasure to meet both Vicky and Gerg. Chris has brought much joy over the years to the World O' Crap Family, so I can only imagine what he's brought to his actual family.

And as an amateur photographer, I would be happy and honored to snap the pix if you guys ever reassemble to pose in front of fading and peeling Gene Krupa.

Scott writes: I can only imagine what he's brought to his actual family

Uh, yeah, well, you do that, Scott [laughing], imagine away, that's most definitely better than the horror I've subjected them to.

When I was five, I tried to talk Mom into putting Gregor out with the garbage, but nothing doing.

Gergvos said...
Nice to know that if I have to attend your funeral, all I need to bring is a match.

Fourfecta coming up. I've emailed my older sister the link, and asked her to comment.

Anonymous above is my older sister, Stephanie.