In the Balcony with Bam-Bam 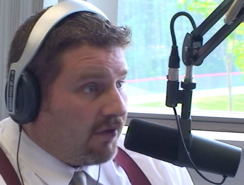 Prior to his dismissal, Bam-Bam had only been an amateur victim of buttsecks, but thanks to the outrage churned up on his behalf by various wingnut websites -- and no small amount of whining on Matt's part -- he was able to turn pro.  Riding the manly wave of his anti-homo notoriety, he became a Concerned Woman for America, rising or sinking to the position of "Policy Director for Cultural Issues."  Apparently Bam-Bam worried the Concerned Women, and the job didn't last, but eventually the lovable palooka left behind his habit of using homophobia to attract attention and vaguely titled sinecures, and turned his life around by taking the position of Director of Cultural Affairs with Liberty Counsel, where he now obsesses about buttsecks.

This week Bam-Bam diversifies his portfolio even further, by following the likes of Ben Shapiro and Pastor Swank into the field of Christian film criticism.  Just to clarify, I don't mean Matt is critiquing film from a Christian perspective, I mean he's criticizing the existence of films that don't involve Christians; and more specifically, films which fail to depict Jesus on a Schwinn.


The Potential Inside: Not Your Father's Christian Film

In the age of gratuitous Hollywood sex and violence it’s not surprising that people are starved for family-friendly entertainment. This is not just a matter of opinion. Movieguide, the world’s premier pro-family movie magazine, has established over and again with its annual Report to the Entertainment Industry that wholesome entertainment sells… big time.

Well, a Report to the Entertainment Industry certainly sounds authoritative, leading one to expect an exhaustive, scientific study full of graphs and tables, polls and statistics.   Actually, it's a wannabe Oscars -- something like the  Conveyor Equipment Manufacturers Association (CEMA) Annual Belty™Award, or the AVN "Best Anal-Themed Ethnic Series" -- but it does succeed in proving that family-friendly films are popular, by giving awards to popular family friendly films.

Undoubtedly.  Let's take a look at a list of the top grossing films, and revel in the high Christian principles, values, and standards.

1.  Avatar.  The most popular film in history features humans getting their asses kicked by devil-tailed aliens who worship a tree.  And not even a Christmas tree.  But it made a lot of money, so I'm sure its celebration of spirituality and nature -- not to mention its rather Christian rejection of cupidity -- was embraced by Movieguide:

The danger to moviegoers is that AVATAR presents the Na'vi culture on Pandora as morally superior to life on earth.
If you love the philosophy and culture of the Na'vi too much, you will be led into evil rather than away from it. [...]
The problem with life on earth is not Capitalism it is the wickedness of human nature. The cure for this is not found in hugging a tree. [...]
Movies are fiction...If you want the truth, read the Bible.

Okay, so maybe this was the one time when a movie did much better by consistently violating those principles, and standards, but there's always that exception which proves the rule.  Let's quickly run through the top ten highest grossing films and see how they conform to Bam-Bam's thesis.
2.  Titanic.  More bad capitalists, although this time their homicides are mostly negligent.  Tits.  Premarital sex.  Suicide.
3.  The Lord of the Rings:  The Return of the King.  Magic.  Murder.  Elves, Orcs, and ghosts.
4.  Pirates of the Caribbean: Dead Man's Chest.  Pirates.  Pagan goddess.  Immortal cephalopod-faced dude who keeps his heart in a beer cooler.  Cannibalism, reincarnation, public drunkenness, Voodoo, magical objects, and mythical sea monsters.
5.  Toy Story 3.  19th Annual MOVIEGUIDE® Faith & Values Awards Gala and Report to the Entertainment Industry "Best Movie for Families" Award Winner!  'Nuff said!  Also treachery, lies, conspiracy, attempted toy-on-toy murder and immolation, and crucifixion of a teddy bear.
6.  Alice in Wonderland.  Drugs.  Anthropomorphic animals.  More drugs.  Magical transformations.  Anthropomorphic animals on drugs.  Flagrant use of a Bandersnatch.  Violent death.  Blood play.
7.  The Dark Knight.  Murder.  Terrorism.  Disfigurement.  Transvestism.  Child menacing.  Arson.  Torture.  Excessive cosplay.
8.  Harry Potter and the Sorcerer's Stone.  Do we even need to bother?  Magic.  Black magic.  Murder.  Attempted murder of a child.  Ghosts.  Mythical beasts.  Two men cohabiting in a turban.
9.  Pirates of the Caribbean:  At World's End.  Ibid.
10.  Harry Potter and the Deathly Hallows: Part 1.  More of the same, with the addition of elves, grave desecration, torture, terrorism, inter-species murder, the possession of a dead body by a serpent, and co-ed camping without benefit of clergy.
And it pretty much goes on like that, with the next ten films being mostly fantasy or science fiction.  The Passion of the Christ, the movie culture warriors inevitably bring up when claiming there's a vast, underserved, dogma-hungry audience in America, doesn't even crack the Top 50.
Matt blames the failure of most Christian films on low budgets and inexperienced casts and crews, but apparently all that has changed with The Potential Inside...

I know how he feels; the only thing I like better than exceeding my expectations is dashing them!  Preferably on a jagged rock!


The movie’s Web site (www.thepotentialinside.com) summarizes the film as a “riveting action packed drama that takes you inside the never before seen world of Elite Bicycle Racing. Filled with spectacular race scenes through some of the most treacherous courses on the East Coast of the United States THE POTENTIAL INSIDE (emphasis original) is a powerfully moving and compelling drama that examines the heart and soul of a true champion.”

The synopsis continues: “Reeling with grief in the wake of a tragic automobile accident, retired veteran cyclist, Chris Carmik, is given an opportunity he doesn't want, to train a rookie cycling prodigy. Preoccupied with battling his own inner demons, Chris reluctantly acclimates the prodigy, named Jake, to the fast paced world of Bicycle Racing.

“Using cutting edge technology and scientific training methods, Chris transforms Jake into a top contending cyclist; however, he struggles to teach Jake the most important lesson prominent in all champions - finding THE POTENTIAL INSIDE.”


Next, the acting: It was good – really good. I found myself immediately identifying with the film’s very believable characters. Whereas Christian films I’d seen in the past seemed to force dialogue and follow predictable formulas of character development, “The Potential Inside” featured very real people experiencing very real emotions and circumstances.

Like a lot of you, I've been waiting years for Hollywood to make a movie reflecting the very real emotions of the very real retired veteran cyclists and velocipedist prodigies one frequently runs into at the grocery store.  These are often the sorts of very real encounters you wish a movie camera was present to record, especially when the retired veteran cyclist is reeling around the aisle with grief, and making it difficult to maneuver your cart past the bulky point-of-purchase display for Dinty Moore® Microwaveable Cups.


Finally, the story: I was immediately sucked-in. It’s rich with adrenaline-laced sports action for the fellows, coupled with a deeply inspiring and moving base-plot for the entire viewing audience. (Warning: bring your tissue. You too, guys. There wasn’t a dry eye in the house.)

As anyone who works in the film industry will tell you, it's not easy moving a base-plot, at least not without a house jack.  (Fun bit of trivia:  While writing North By Northwest, Ernest Lehman tried to get by with just a 6x6 screw jack for the third act twist, but Hitchcock went into a towering rage, and insisted he use a joist holder.  Years later, they laughed about it.)


“The Potential Inside” has the stuff. It’s what Americans have been clamoring for: Wholesome, pro-family entertainment combined with the high-tech, quality production value we’ve come to expect from A-list motion pictures.

Assuming that Americans have been putting their money where their mouth is up till now, the stuff they've mostly been clamoring for are naked breasts, mass murderers, magical rings, heathen gods, vigilantes, wizards, witches, terrorized toys and tree-huggin' blue furries.  But I'm sure their abrupt conversion to wholesome pro-family entertainment is sincere.


Most importantly, though, it has the real stuff – the stuff today’s postmodern box office sorely lacks: Transcendent truth; the love of Christ; and a roadmap down the narrow path to eternal redemption and salvation.

And Americans not only want to see the narrow path to eternal redemption and salvation, they want to see people ride bikes down it.

Wow, that's one long fucking movie. Better count me out. Prostate, you know.

Jesus Christ. The MPAA ratings have been in place since the late 60s (and were very shortly thereafter turned into an economic weapon to reduce what is laughingly referred to as "sex", depictions of drug use, and graphic depictions of the results of violence, though not of violence in and of itself). There're rows of "Family"-themed DVDs at Wal*Mart or Target, but I can't seem to find the AVN section (and I'm too embarrassed to ask for help). There are fifteen "Family" channels on my basic Uverse service, and five religious networks, not counting the two local religious stations they also carry.

So, what, this shit isn't enough for clamoring Americans? Forty-five years and counting--unless we want to start counting from the Hayes Office--isn't long enough for the vasty Wholesome Christian Majority to run everyone else out of the entertainment biz? One is almost tempted to suggest you'd rather see economic pressures against anything you consider un-Christian be turned into legal prohibitions. Why don't you say it? Arguing honestly might make a nice change of pace. Otherwise, shut up and enjoy your niche. And consider that it's much larger than that afforded to Americans Who Wish You'd Shut Th' Fuck Up For Ten Seconds.

So, what they're saying is that testosterone patches, anabolic steroids, human growth hormone and erythropoietin — the cyclist trade's cocktail of choice — are really the manifestation of Christ?

The Potential Inside, indeed!

So dense they apparently need a roadmap to go down the narrow path to eternal self-righteous indignation.

You only mentioned breasts once. i am sure this was an oversight...

...transcendent truth should be able to afford a GPS

"Riding a bike down the narrow path to eternal redemption and salvation."

I get the image developing...and then round the corner on his bike comes George W. Bush.

IMDB lists three-quarters of the cast without any pictures and tells us that the movie was made for about a million. Box Office Mojo lists all the Pokemon films, films from the 60s and before (Without any box office figures) and a film released in 2008 that grossed less than $11,000, but doesn't list "the Potential Inside."

You could have ended your post here, Scott, and we would have gotten the gist:

1) “Using cutting edge technology and scientific training methods, Chris transforms Jake into a top contending cyclist; however, he struggles to teach Jake the most important lesson prominent in all champions - finding THE POTENTIAL INSIDE.”

2) There are plenty of movies about bicycling that involve an older, wiser cyclist and a tyro out to prove himself, from Breaking Away (it's a stretch, but go with me) to American Flyers. None of these involve Christianity as anything but a deep backdrop the fact that JESUS WON'T TURN YOUR CRANK FOR YOU!

By an astonishing coincidence, the film's producer is also part of Liberty Counsel.

Sorry; wasn't aware my father HAD a Christian film...

None of these involve Christianity as anything but a deep backdrop the fact that JESUS WON'T TURN YOUR CRANK FOR YOU!

That's why we have priests...

And after the car crash, Christ on a crutch!

A rip off of Kevin Costner's 1985 "American Flyers"! Who woulda thought anyone would bother?

why do I get the feeling that the most common review of this flick will be "I dreamed all last night, that everyone I ever sold a ticket (sic) to came back for a refund. And there you were, handing out the checks! One for you, and one for you..."