Welcome back.  Mike and Ike are also devotees of the theater, widely recognized as the Midwest's leading experts on Evil Dead: The Musical, and earlier tonight Ike published a piece on Facebook about a new production of Terrance McNally's Corpus Christi.  I remember the brouhaha which attended the debut of this play at the Manhattan Theater Club in 1998; anti-Semitic slander, threats of arson and murder, and protestors worked into a tizzy by the Catholic League nearly shut the production down -- even in New York, on the eve of the Millennium -- a sign that, like the poor, William Donohue we will always have with us.

And now somebody's doing it in Akron. Ohio.  In a church. 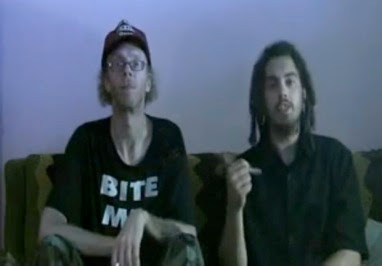 I asked Ike (he's the one on the left) if I could reprint his post on World O' Crap, and he very kindly gave his permission.

A Letter to Any and All Protesters (Past, Present, and Future) of the play Corpus Christi

So Jesus, Muhammad, Buddha, Herne, and Tiamat all walk inta a bar...

Okay, now that I got your attention, howdy!  Ya don't know me, and if ya did most a ya probably wouldn't want ta, and I'm fine with that.  Love everybody, that's what Jesus taught, right?  I know he didn't want people killin' for him, but that's a debate for another day.

So let's talk the "gay Jesus" play.  Ever since the show premiered, the writer's gotten death threats, the-aters that have done it have gotten bomb threats (Now THAT'S Christ like) and, of course, there've been picketers.  Now I ain't sayin' ya don't have a right ta picket (Cause ya do) but it would be nice if ya actually knew somethin' about what ya were protestin'.

True story:  Many years ago the limey was doin' some work for Interpol and I was wastin' time doin' a little actin'.  I got cast in a production a Corpus Christie.  We had ta move to a different the-ater the week we opened, and we got picketed, but here's a funny thing.  We had folks (Gay and straight) comin' up ta us afterwards with tears in their eyes, sayin' they felt closer ta God. We even had one a the protesters come see the show the last night and they LOVED it.

Far as I'm concerned, that ends any and all debate about the show right there.

Here are a couple a things ya should know before ya protest the show:

1.  Jesus does NOT have sex with any of the disciples on stage.  I've seen this said several times when folks rag on the show and THAT DOES NOT HAPPEN.  If ya been told it does, you're bein' lied to.

2.  The play is NOT SET in Biblical times.   It's set in modern day Texas (There's a really good joke there, but I ain't doin' it).  In fact, the show starts with the actors gettin' their roles.  It is not meant ta be the definitive version of this story.  It is meant ta be one of many, and there have been many, and several of them have sucked...just sayin'.

3.  The show is indeed a bit vulgar, but it is in NO WAY sacrilegious.  If it was, all of the deeply religious folks who saw the production I was in wouldn't have walked out (at the end) cryin' and feelin' closer ta God...end of argument.

This production, directed by Benjamin Rexroad, does one major thing differently from the one I was in.  He cast women in the roles of Joshua (Jesus) and Judas, played by Amy Spencer and Kim Woodworth respectively and both of these women give Oscar winnin' performances as men. Amy gives the most realistic performance of Jesus (Joshua) that I have ever seen PERIOD, and by that I mean that at the end you're not cryin' cause ya just watched the Son of God die for our sins, you're cryin' because ya just watched a warm, carin' person that you genuinely care about REALIZE that he is the Son of God and WILLINGLY die for our sins.  Her scenes with Woodworth are a joy to watch.  In fact, the entire cast is first rate, but I gotta give a special shout out ta TJ Jozsa, who played the amazin'ly creepy guy in our horror short Skeletons.  His turn as a high school girl is absolutely hysterical.

All I'm sayin' is this, protesters, know what you're picketin' and do it for the right reasons.  Do what the brave soul did at the show I was in...see it.  If it offends ya, then protest away (It's your God given right, after all) but ya just might see somethin' that genuinely moves ya, that brings ya closer ta God, like it did for the audiences of my show and the audience I saw it with tonight.  I have never been emotionally moved by a play before (Heck, I rarely get emotionally moved by anythin') and this show did it.  I felt a little closer ta God tonight, and I think he's fine with that.

I haven't been to a play in years, but if this one comes to the area I'll see it.