They Call Her One Eye 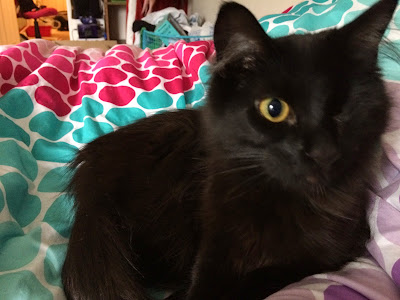 And no, she wasn't caught in mid saucy, come-hither wink. As K explained...


She was up for adoption at our Vet's office. Poor thing had been there 6 months. No one wanted a one-eyed black cat... except Jesse. I caved almost immediately, tho I protested feebly...she's a sweetie. Rescued as a kitten and raised in a cage, poor baby. A biggish cage, but still! Right now she lives in Jess' bedroom, and LOVES sitting on the window sill, especially when the window is open (it's screened).

Jess named her "Dani", tho the people at the Vet's called her Nattie.

Adopting a handicapped cat is something few feline fanciers would do (other than Sheri, of course), so kudos to K and Jesse for their kindness and charity, and congratulations to Dani for her good fortune in finding a home with them.  (The great thing about a one-eyed cat is that -- unlike the rest of the family -- they probably won't bug you to buy one of those new fangled 3D TVs.)


Jess says Dani gets v agitated when Jess showers. Like the comic said "All that water! ALL OVER HER!"

She's scared of my other 2 cats, tho they're not aggressive. Chester is not well -kidney problems- and just looks at her disdainfully. Rai wants to PLAY, but poor Dani is unclear on the concept of play. I think they'll be pals eventually, and Chester may eve wash Dani's face like he does Rai.

Chester (left) and Rai, just to refresh your memory... 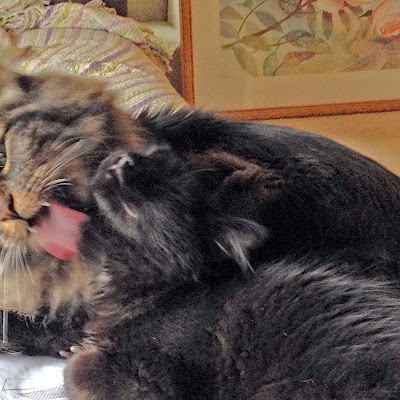 I sent K my felicitations and mentioned that I probably would'a been mean and called the new addition "Popeye," because I'm mean. K wrote back to say:


I was calling her "One Eye", but making myself get used to Dani. She doesn't answer to any of them- probably has a secret name (One Eye?)

And why not? It was good enough for Christina Lindberg! 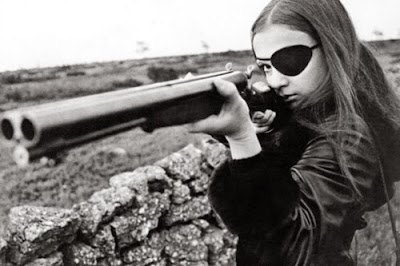 Congrats on your new home, Dani!
~

Yay for the pirate kitty finding a new home!

Aye, mateys, 'tis a snug harbor where she's fetched up at last. We've a new recruit for the Brethren of the Scratching Post, so pledge her health with a pint of grog! (Or whatever else is handy, and potable.)

Congrats to Dani, and thanks to KWillow and Jesse for giving her a good home.

Yay and double YAY for Dani and her new home. She's adorable.

Awww, so cute! Welcome Dani "One Eye", the best pirate and mafiosa, EVER!