Happy Birthday Actor212! I Got You a Parade!

Today is the natal anniversary of our old friend Carl (alias Actor212), working thespian, thoughtful writer, and comic commenter par excellence. Carl can be found many places -- in the laughter of little children, in the gentleness of animals, in various filmed segments on Saturday Night Live, in his own blog Simply Left Behind, and in our comment threads, which he has been bedazzling with the Ronco Rhinestone & Stud Setter of his mind since Dinah Shore Ruled the Earth, if I may borrow a title from Christopher Durang and Wendy Wasserstein. And why not? They're New Yorkish, and so is Carl, for he is a man who has traveled every inch of every borough that isn't Staten Island by bicycle.

And not only is Carl warm, witty, and frighteningly huge, he's also kind enough to celebrate his birthday on or about the date of the Hollywood Christmas Parade, so I've got something to write about besides what a great guy he is. And he is, don't mistake me -- I'm not just saying that because he could snap me in half like a balsa wood kite stave.

Anyway, I did what I usually do every holiday season: wandered around the staging area of the parade and looked at half-flaccid balloons, then got the hell out before the paraders started parading.  But by taking a few photos and placing them in cunning proximity to the first two paragraphs of this post, I can make it seem like we went to the trouble of throwing a parade in honor of Carl's birthday! (Shhh! Nobody tell him! I'm hoping if I can get the hang of this fake news thing, I can land a highly paid journalism gig with a Macedonian teenager.) 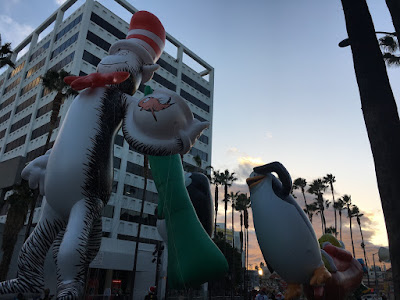 Things were getting rambunctious even before the event started, with a gassy penguin saluting Gumby's ass. Now I'm no expert, but Gumby has always struck me as having rather a flat ass, rather than a Dat Azz!, but to each his own. 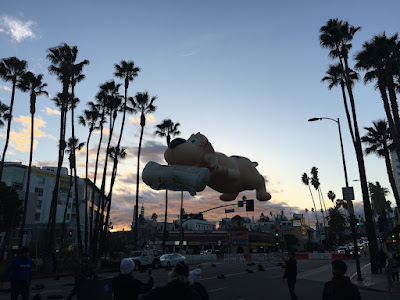 It's Clifford, the Big Red Hindenberg! 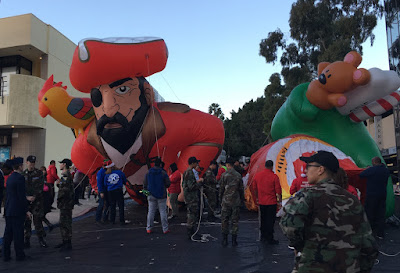 Overly zealous members of the military shout "hoo-rah!" and force the pirate balloon to drop and give them twenty. 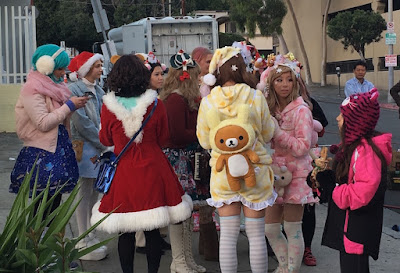 A CDC Rapid Response Team is dispatched to treat and quarantine a group of young women suffering from a sudden outbreak of kawaii. 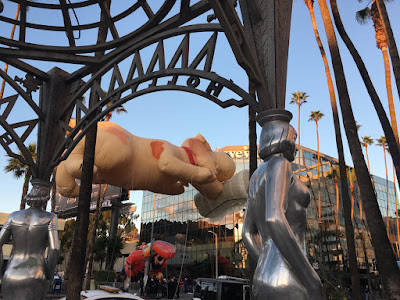 Clifford viewed from the perspective of the setting sun, and through the local eyesore Mary has dubbed "the Migraine Monument". 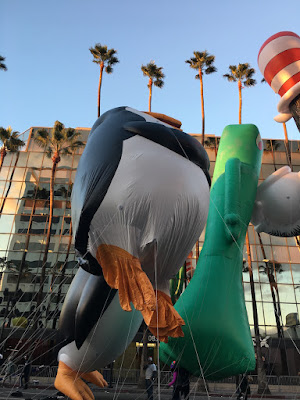 And finally, even if your legs are oddly deflated, that's no reason you can't still ogle Gumby's disappointingly concave ass.

But enough of the brobdingnagian effigies looming over Hollywood Boulevard, let's serve the cheesecake! 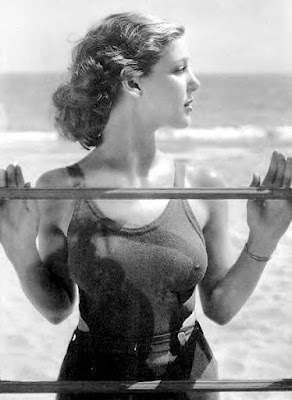 Sadly, this photo seems to have driven our Sexy Birthday Lizard to a somewhat inappropriate response... 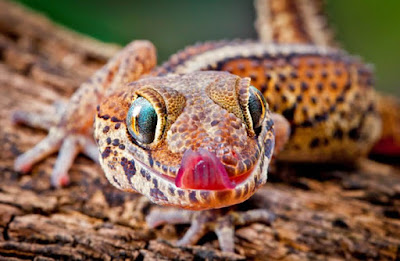 Dude! Stay in your lane, please.

And please join me, won't you, in wishing Carl a very happy birthday.
Posted by Scott at 4:38 PM

Yay Carl, still kicking! Many happy to actor212, & to any & all I've missed wishing the natal best recently, as if my wishes ...

Anna Mae Wong closest to us, right? Wow, I haven't been north of the Target on LaBrea in yrs.

Thank you, Scott, and thank you all for such a lovely parade! It's one I will treasure for....SQUIRREL!

Happy birthday, Carl, to you! (He says, thereby cunningly circumventing the copyright issue.)

And many SBLs to come! But really, I have to admire this post's reptilian roué for his restraint; my response to your birthday cheesecake had a good deal more of Tex Avery to it.

Hey, Carl. Happy Birthday to ya.
There's been a mighty lot of mud under the bridge since them good ole days when I first saw your cute tail flashing on the interwebs - and we're both still standing - sorta.Here's to many more and happy years for both of us.
XO

Happy-happy joy-joy, Carl. Been many a moon, n'est-ce pas? Just saw "Play-Girl" on TCM yesterday, might've been Loretta's birfday, she had a whole run of pix, with those sloe eyes and impudent quips.

And I envy your sexy-as-hell Birfday Lizard --- he reminds me of a Marine I knew once... mostly the lascivious eyes & the impudent tongue...

Enjoy it all, dear heart, and don't be a stranger!