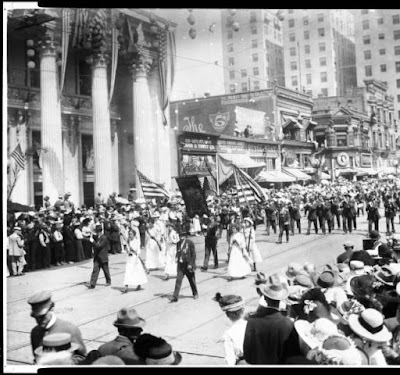 While researching an unrelated magazine article I came across this photo in a newspaper morgue, showing the Memorial Day Parade on Spring Street in Downtown Los Angeles in 1915. I could find no details about the event, but it's almost certain there were Civil War and Spanish American War veterans present. Possibly a few elderly survivors of the Mexican-American War and the various pre- and post-Civil War Indian campaigns, as well as the Boxer Rebellion, the Philippine Insurrection, our adventures in Samoa, and our occupation of Nicaragua. Two months after this Parade we would invade and occupy Haiti, which was followed by our occupation of the Dominican Republic, the Punitive Expedition into Mexico, and then, two years later, our entry into World War I. Even in peacetime, it seems, we've kept our troops busy.
Posted by Scott at 10:00 AM

Even when there's no oil 'neath them thar hills, the machine will ALWAYS find a way, and find a war, even if we have to make it up outta whole cloth. Kinda like the draft-dodging waste of skin currently farting-up our White House, a "president" made up of nothing but marketing bullshit. A pseudo-"patriot" who molests the flag but blows tons & tons of smoke up this country's ass, especially when it comes to how he "feels" about us and this country. I'll put the bet to anyone willing to wager: soon as this clown's outta office (never soon enough!), he's absconded off to Majorca or the UAE with half the fucking treasury, not to mention all of the corporate & military-industrial kickbacks that he's accruing now. Y'know, if Melania doesn't snap & kill him with one of those bloody fucking x-mas trees.