A Walk with Love and Death (But Mostly Death) 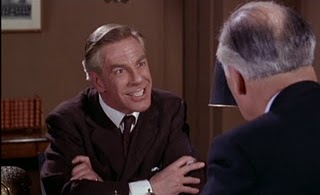 Smooth, stylish, and only occasionally crazy-looking actor Michael Gough has left this world for a better one -- in other words, a world which does not contain Joel Schumacher movies.

Gough, who in his movie roles supplied the Grim Reaper with a great deal of wholesale business, was himself a reluctant customer, succumbing at the age of 94.  His work stretched from Ealing's The Man in the White Suit and Olivier's Richard III to Burton's Corpse Bride and Alice in Wonderland, with stops along the way at Horrors of the Black Museum, Black Zoo, Dr. Terror's House of Horrors, Trog, Horror Hospital, The Legend of Hell House, and Top Secret!

And even though we featured Mr. Gough twice in Better Living Through Bad Movies (1961's Konga, and 1997's Batman & Robin), there were no hard feelings on our part, and we remained happy to see him whenever he popped up in a film.  So good night, Mr. Gough; and flights of mutated chimps sing thee to thy rest.
Posted by Scott at 2:53 PM

I'm always impressed to see obituaries on actors with an extensive body of work like this. I may very well never have heard of them, but clearly they were successful at what they did. I would have loved to ask him what it was like to work at Ealing Studios.

I agree. If I could go back and be a part of any studio -- Warner Brothers or Universal in the 30s, MGM in the 40s -- it would have to be Ealing in their heyday. What an amazing streak of incomparable comedies.

He was also memorable as David Farrar's bomb-disposal colleague in Michael Powell and Emeric Pressburger's underrated wartime drama THE SMALL BACK ROOM.

Glad you noted this, I hadn't seen it mentioned elsewhere. Like Dr. Alice above, I have a fondness for good character actors and their strange ability to pop up all over the place. Particularly since I am a horror movie fan, he was a very familiar face for many years. Godspeed.