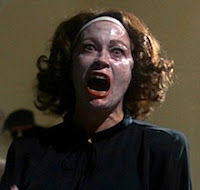 Today is Mother's Day, and to mark that occasion, here are my picks for the all-time worst movie moms -- depictions of motherhood that leave you all the more grateful for the mom you had (unless, heaven forbid, yours was worse.)
Listed chronologically.

Kate (Jo Van Fleet) in East of Eden (1955).  What can you say about a mom who leaves her kids to operate a whorehouse? I guess it could be worse -- she could have taken them with her.

Rose-Ann D'Arcey (Shelly Winters) in A Patch of Blue (1965). Batting your child around and letting your "boyfriends" rape the kid would be bad enough. But when your daughter's also blind, well, that just makes you extra evil-er.

Margeret White (Piper Laurie) in Carrie (1976).  "Your dirty pillows are showing." "They're called breasts, Mama. and every woman has them."

"Joan Crawford" (Faye Dunaway) in Mommie Dearest (1981). You knew I had to include her, didn't you? I'm not sure how much of Christina's claims are true (her siblings deny them), but the movie version of Joan is pretty ghastly.

Lilly Dillon (Anjelica Huston) in The Grifters (1990).  Faking her own death by killing her son's girlfriend would seem to be a low point. But later Lilly actually does sink lower.

Diedre Burroughs (Annette Bening) in Running With Scissors (2006). "Augusten, don't take my cigarettes. You have your own."

Mary (Mo'Nique) in Precious (2009). Throwing a TV set at your daughter is mean. And makes it harder to watch "Wheel of Fortune".

(I'd also like to add that, in listing these classic Bad Moms, I wasn't knocking either the films, or the actresses' portrayals. Jo Van Fleet, Shelly Winters and Mo'Nique all won Oscars for their respective roles, and Piper Laurie really should have won for Carrie.)

Hey, the Grifter's Mom risked her life to see her son got emergency medical treatment. Remember the gangster burned her hand with a cigar? And the son's girlfriend was trying to kill the Mom. Of course the end scene is beyond horrifying and creepy, but not deliberate on Mom's part.

KWillow-it's been 20 years since I saw "The Grifters", so, I'm embarressed to have gotten the plot details off.
And I disagree strongly with you on Aurora Greenway (Shirley MacLaine). When I think of her, I usually think of that hospital scene-"JUST GIVE HER THE SHOT!!!!!!"

Yeah, I have to take that back. It was her clapping her hands over Baby's crib that affronted me. I know the fear... is Baby breathing? Why didn't the garbage truck wake Baby?

How's about Momma in Throw Momma from the Train? She was pretty damn nasty. Wouldn't even die on schedule.
Suezboo

My favorite "bad movie mom" is Raymond Shaw's mother in "Manchurian Candidate" - the original with Angela Lansbury in that role. (I have not seen the more recent remake). Oh wow, Angela Lansbury was amazing in that role - she essentially destroys her son to further her desire for power, and the incestuous kiss near the end of the film is frosting on that cake o' evil.

don't forget the gangster moms: Carmela Soprano and the moms from Animal Kingdom and Down Terrace, or the grifter moms like Parah Sailin.

Carmela Soprano was a TV mom, and her mother-in-law, Livia was arguably worse. I do agree with you on Jackie Weaver's awesomely evil character in "Animal Kingdom", a bad mom and worse grandma. I plan to do an expanded/revised list NEXT mother's day. I'll bet you're all excited about that. :)

I can't believe I missed that one too, Scott.
I was tempted to include TV moms too, if only to include Mrs. Stone (Eleanor Bron) from "Absolutely Fabulous". She didn't give birth, she had something removed!

What about Mama Rose in "Gypsy?" Surely pushing your daughter into stripping is in the top tier of shitty moms.

Not the worst perhaps, but surely worth an honorable mention: Mrs. Daphne Flatow (that's Max Frost's Mom in "Wild in the Streets" (1968)), a shrieking harpie with a badly damaged husband and son to show for it.

Played by Shelley Winters, so it's Shelley for the two-fer.

Michelle Pfeiffer, "White Oleander." Makes her daughter go through prison security so she can sit there and get psychologically shit on and second hand smoke blown in her face.

What about the mommie/heroin junkie in “Trainspotting”?

Mama Fratelli (Anne Ramsey, who also played the uncooperative mom in "Throw Mama from the train") in "Goonies" was a scary critter...