Welcome back. As you probably noticed, Blogger was down for a day or so, but that doesn't mean the March of Time took a breather.  No, while this and other blogs lay fallow, HUMAN EVENTS and Redstate were goin' to the mountaintop to demand that Facebook be treated like any other public utility, by which I assume they mean, privatized, then looted by Enron.

We, the editors and staff of HUMAN EVENTS and RedState.com, and the tens of thousands of Americans who have attached our signatures to this petition...


…salute your success in creating an extraordinary medium through which millions of people can make their voices heard.

It’s like the purity of ancient Greek democracy, if the citizens of Athens had used the Ecclesia primarily to post cat videos and declare themselves Mayor of the Steak Corral.


We also applaud your recognition that Facebook is now an influential public platform and key vehicle for political expression.

Because it's usually pretty tough to get wealthy narcissists to admit their cash cow is the shit.


Your recent Town Hall with President Obama held on April 20, 2011 was an impressive example of that.  However, given Facebook’s dominance of the internet...

Yes, I remember when there was lots of stuff on the internet -- newspapers, blogs, Youtubes, Japanese rope bondage tutorials, bicycle sprocket dealerships with their virtual "shopping carts," knitting patterns, pornography, and, of course, galleries of lovingly scanned menus from extinct restaurants -- but now it's just Farmville, sneaky, ill-advised changes to relationship status, and blurry photos of your toe fungus taken while drunk and posted in the middle of the night.


...we believe Facebook has a duty to provide “equal time” to the eventual Republican candidate, just as the other private media companies that control the public airwaves are required to do.

"And were, in fact, required to do about all issues of public importance, before Reagan eliminated the Fairness Doctrine in 1987, which nobody better even THINK about trying to revive, because it would be the moral equivalent of an assassination attempt on Rush Limbaugh. But even though Facebook doesn’t use the public airwaves, we’d like you to pretend we never gutted the law and that it applies to you, even though it wouldn’t even if we hadn’t. Mm-kay?"

Anyway, I look forward to Human Events and Redstate making in-kind contributions of space and time to Barack Obama's campaign, because when your website controls the public airwaves, you must be like Caesar's wife, above suspicion, unless Caesar is married to Meghan McCain, in which case we'll bend the rules if she wants to tweet pix of her cleavage.


We hereby respectfully ask that you recognize your opportunity and responsibility to provide equal time to both sides of the national political debate... 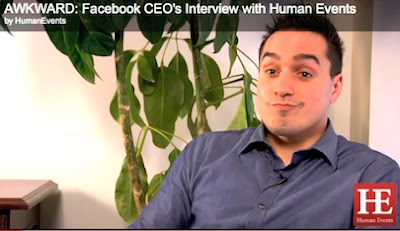 Jason Mattera Demonstrates Why Political Humor Should Come with a Child-Proof Cap.

...by pledging that you will invite the eventual Republican presidential nominee to share the stage with you at a Town Hall event identical to that which you held for President (and candidate) Obama.

Identical in every respect, except the Republican will almost certainly be white, so you won’t need to ask him to provide two forms of photo I.D.


We believe that not doing so will be a violation of the trust millions of Americans have placed in Facebook.

I guess I haven't been getting my money's worth out of Facebook, because I primarily trust it as a source of Happy Birthdays, Super-Poking Penguins, and bitter complaints that the new "German Chocolate Cake Sipper" cocktail at Fridays is not literally a cake you can drink.


Your members include people of all political persuasions, including more than fifty million right-leaning Americans.

I'm pretty sure Jason just pulled that figure out of his ass, perhaps during the bathroom break he took in the middle of the Zuckerberg interview.  Anyway, there are more women on Facebook than men, and women tend to vote Democratic,  especially in years when Republicans are offering a new anti-choice bill every other day, so by all means let's let demographics to determine the political content we're allowed to ignore.


That Facebook co-founder Chris Hughes helped lead Obama's 2008 online campaign already gives many of us reason to believe you lean 100% opposite.


Failing to give equal time to the Republican presidential nominee will further position Facebook squarely and irredeemably as a biased, untrustworthy member of the liberal media — just another political tool where censorship rules — rather than a free and open public gathering place. At risk will be the loyalty of countless right-leaning Facebook members.

Outraged and disappointed right wingers might refuse to post Photoshopped images of chimps with Obama's face as an act of passive resistance.  Oath Keepers and Neo-Nazi militias might switch to Evite to arrange their meet-ups, and Sarah Palin might stop posting her selections from The Protocols of the Elders of Zion, which would be just as frustrating as the time my second grade teacher started reading Where The Red Fern Grows to us the second week of June, then suddenly school was over for the year and we never found out how it ended!


We urge you to recognize the legitimacy of our request...


...by posting your pledge, as CEO, that Facebook will host the future Republican presidential nominee at a Town Hall meeting identical in all respects to that recently undertaken for President Obama.

Thank you, HUMAN EVENTS, for fighting on behalf of the little people, even though I know you're hoarse and have a sore throat from shouting your name all the time.  Now, if you wouldn't mind, would you contact the Twitter people and get them to address the gross disparity between my total followers and Ashton Kutcher's?  Thanks.
Posted by Scott at 12:23 PM

...position Facebook squarely and irredeemably as a biased, untrustworthy member of the liberal media

I get all my news and current events from Facebook - my whole family, including some fairly obscure members, is quite famous, it seems

Just how fucking stupid of an inbred idiot does one need to be to confuse Facebook with news, "news," or even news-like content?

Jason, take the whole tablet; stop breaking it in half.

heydave- well, they think Fox News is a trustworthy News Source! Why not Facebook- assuming the Facebook creator/owner is a conservative, that is.

The conservawingers try to use the Liberal's sense of fairness & equality to force us to agree that their twisted, insane lying viewpoints are "Factual Truth".

Oh to be Mark Zuckerberg just long enough to respond to that letter!

TheWeekInCongress.com tells an interesting story about the House Republican's work this week.

Gas prices are up so the legislation of the week had to do with drilling for oil.

One bill lifted the President's drilling moratorium even though there is no longer a moratorium.

Another bill would open Gulf and coastal areas for exploration even though the President has already opened shallow- and deep- well drilling. (Incidentally, an amendment requiring that all oil drilled be used in the US was soundly defeated by Republicans.)

And another gets serious about environmental protections but it turns out the bill was just another end run on the EPA and any carbon-capping, greenhouse-reduction moves they might make.

The the bin Laden thing came up so they decided to shoulder in on that one and pointlessly authorized funding for the intelligence communities for the last four months of the fiscal year even though the agencies are well funded and not complaining.

So I guess that when you get elected by those taken with ignorance-driven madness and have truly nothing to offer the average person, you just try to cop other peoples' successes.

So when Zuckerberg gave ONE. BILLION. DOLLARS to Chris Christie's school system, that wasn't balance either, right?

Sorry I've been quiet, Scott. It's hard werk blogging all day at Sadly, No! AND at my shitty little site that I put eight times the effort in for none of the advertising revenue and never even mention over at S, N!

Huh?? They want "equal time"??? These are the people who cheered when Reagan shot the Fairness Doctrine" in the head.

Oh...I see--it's DIFFERENT, because it's the REPUBS who got supposed short shrift.IOKIYAR strikes again! (Bringin' to mind another Republican motto: "You CAN have your cake and eat it, too....if you're a Republican....")

Well, I'll concede they MIGHT have a point the day Fox stops being a right-wing propaganda machine and becomes more like NPR....

If Facebook submits to that request, I will take my page and my whole 14 friends and flounce off angrily, casting dismissive looks over my shoulder.

"At risk will be the loyalty of countless right-leaning Facebook members."

What will be at risk? Will they all go back to MySpace?

Or his biographer, I P Frehely?