Sorry about the interregnum, but I was working hard and fast on a pitch for a project I would dearly love to get, and which left me without even the minimal surplus brain power required to read Jonah Goldberg or Dr. Professor Mike Adams.  However, since submitting the produce of my labor, and going into the indeterminate waiting period for a response, I have remained busy, whipping up a frothy, but non-Santorum mixture of stomach acid and general angst.  But I'll have a new post later this evening. 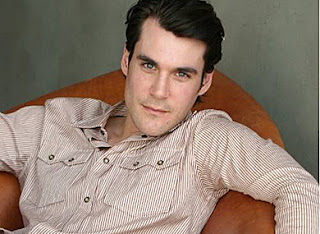 In the meantime, I heard today that Sean Maher of Firefly and The Playboy Club has come out of the closet, and my first thought was, I sort of hope his friends and colleagues are good at faking polite astonishment -- you know, the kind you're called upon to counterfeit when it's your birthday, and your co-workers suddenly call you into the conference room at a strangely late hour of the day to attend a spontaneous but urgent meeting with a suspiciously vague agenda and you're supposed to be surprised by the paper plates and plastic forks and the Carvel "Cookiepuss" ice cream cake emblazoned with your name, melting on the conference table.

In other words, a happy event, but as far as twist endings go, this didn't exactly feel like the climax of The Crying Game (which used a literary device I like to call "The deus ex Pup 'n' Taco"-- in honor of a 1970s Southern California fast food chain -- because the diner, metaphorically speaking, came in expecting Taco, but was flummoxed to find Pup on the menu).

So despite the absence of what magicians call "a good reveal," we would still like to send out our best wishes to Sean, whose work we have always admired, his partner, and their two children.

Now, in that same spirit of keepin' it real, here's another found object entry for our caption contest. 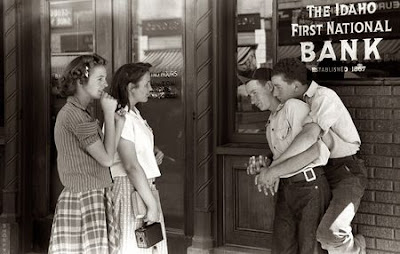 Kay:  Oh, nothing.  But when Arlene told me about the double date, I just assumed it would be, you know...mixed doubles.

Click to embiggen and share your insights into how a quick application of "reparative therapy" could make this the greatest night of their young lives!
Posted by Scott at 2:05 AM

Email ThisBlogThis!Share to TwitterShare to FacebookShare to Pinterest
Labels: Contests, State of the Blog

See? I wear him as a disguise and you wear her.

Re: The Project and The Waiting (sequel to The Pride and the Passion, though they couldn't get Frank or Sophia or Cary, or the cannon): just breathe deeply and repeatedly, Scott.

As for that photo - oh, dear Goddess, that's my very early adolescence you've put up for all to see and snark at! All except for the bank! Yes, children, we did look like that... oh, cruel Posterity!

My recollection is that 13 year old suburban boys would grab just about anything solid and warm they could get away with grabbing. Girls weren't much better off. No Popsicle Parties back then, you see. No modern mores. We had to make do.

Jen, it;s the First Idaho National Bank, where they separate the men from the boys with crowbars....

A young Larry Craig shows off his wide stance.

"They were more innocent times. People seemed to laugh more. Boys could clasp hands and ride each other down the street, and no one thought them queer ducks."

Well, if I HAD to live on a Counter-Earth, I'd rather live on Terra than on Gor...