Yes, it's September, which means we're getting into High Birthday Season around here (you can always tell a World O' Crap reader -- they're the ones whose parents would rather have unprotected sex than put up the Christmas lights).  And now that I've thoroughly squicked you out, please join me in wishing a nostalgically festive natal day to Ivan G. Shreve, Jr., the proprietor of Thrilling Days of Yesteryear, and the Internet's only accredited expert on Mayberry R.F.D.

In addition to this being the anniversary of the day Ivan made his big entrance through the proscenium arch of the maternal loins and began to strut and fret his hour upon the stage (actually, 44 minutes with commercials and station identification), he has also marked the occasion with another guest post for Stacia of She Blogged By Night, this time on Cecil B. DeMille's early Sound Era oddity, Madam Satan,  If you've ever wanted to cheat on your wife with Lillian Roth, then party on a Zeppelin!, you owe it to yourself to click here. 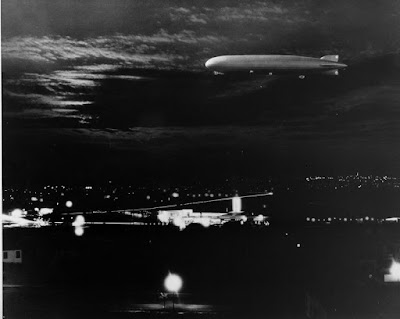 But that's not all!  Since Ivan was s.z.'s first blog-child (he was inspired by her scintillating literary gifts, but disappointed that she seldom used them to write about Mayberry R.F.D.), we're going to skip the traditional Ann Coulter pic, and instead run a shot of TDOY goddess Jane Greer. 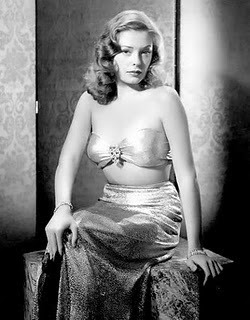 Note to NRO Cruise Speakers:  This is how you do do a Glamour Shot.  Happy birthday, Ivan!
Posted by Scott at 12:01 AM

Humina humina on that Glamour Shot! Don'tcha miss movie vixens with some real-live, natural MEAT ON THEIR BONES???

Happy happy joy joy, Ivan!!! While it hardly seems fair that you don't get a picture of HeShe Who Shall Not Be Named on YOUR birfday, and then to get that nice little hottie Jane ON TOP OF THAT, I'm personally quite gratified by Jane's picture. But if I will always have mAnn Coultergeist inflicted upon MY birfday posts (which never fail to make me get all mushy and shit, damn Scott & Sheri & Mary for their ability to say just the right nice things, even if they have to make 'em up...), I think that even one as arch and sharp as a new sword as yourself should STILL get his own copy of teh undead bony thang.

Jealousy aside, I wish you many many more happy, healthy, smart-assed years to come. And may the door-to-door missionaries avoid your home like the fuckin' plague, at least until your NEXT birfday.

Mayberry R.F.D., maybe not so much, but many happy returns to Ivan.

Happy Birthday, Ivan. I traipse over to TDOY every once in a while, and am struck dumb by your erudition - - and then I start feeling like a 6-year-old riveted in front of my grandparents' small TV by Lash LaRue or Hopalong Cassidy. Whatever, you certainly deserve that lovely pinup.

Hell, we all deserve lovely pinups. I remember one of about 1939 vintage - a fab candid shot of Gary Cooper sitting in a folding chair on a movie set with the neck of his shirt slightly open, very simple... and as a college gal pal of mine memorably said of it, "Look at that. What a piece of ass."

What, couldn't find a cheesecake shot of Helen Crump for the Mayberry RFD fans?

...World O' Crap reader(s) -- they're the ones whose parents would rather have unprotected sex than put up the Christmas lights)

Verrrry Interesting! though my birthday is in October. Perhaps I was a Valentine's Day Baby?

The most congenial people I know are all August-born... sadly, no one in my family. Buncha grumps.

though my birthday is in October

Hey, mine too, K. What day does yours fall on?

Thanks for the math check; I think I may have been conceived through some weird Halloween celebration!

Happy Birthday, Ivan!
I agree with your advice to the NRO Cruise speakers that the best way to do "Glamour Shots" would be to replace their pictures with those of attractive '40's movie stars.

Happy birthday, Ivan! I still have cocktails, if you need one. Or if you just want one, but that's weird....

I was born 8/27 and my brother was born 9/9. My mom was happy to tell us that I was a Christmas Present and he was a Happy New Year's gift... Gee, thanks mom! I guess I should be relieved she didn't decide to tell us what positions my dad favored...

Though I do know that my parents used to make out to Judy Collins and Gordon Lightfoot...

Being a 10-month baby, I was conceived right around the same time that a young African-American man was being jumped, stabbed & stomped to death by the Oakland chapter of Hell's Angels @ Altamont. Cheery to know, eh?
Play-by-play available in the song, "American Pie", y'know, about the "devil dancing with delight," etc.

Scott, I scoured my Birfdays List for KWillow's natal celebration day, and somehow, through all these years, she's managed to elude my annual calls for birfdays for teh list, so sorry that I couldn't narc her out for ya. I don't even know if she's a Libra or a Scorpio! Though I suspect she's prolly on the cusp, if you don't count the new 13th zodiac sign, and I have no idea as to her Chinese year animal... *sigh* Like Robin M., she's a tough nut to crack sometimes...

Many, many thanks for your kind birthday post and to all of the regular WO'Cers for their well-wishes. I had a perfectly splendiferous birthday celebration this year, aided immeasurably by that lovely photo of Jane "Just a little cold around the heart" Greer...which I not only purloined...er, borrowed for my own blog post...but who now is stationed as my desktop background. (Let me just discreetly say that upon its acquisition, I was able to hawk my matching set of Cialis bathtubs on eBay...if you know what I mean, and I think you do.) Thanks again, everybody!

Hey... before snarking on Gordon Lightfoot, listen to "Carefree Highway". I always liked that song... so sue me.

You can get a load of her at her femme fatale best (although honestly, what kind of name is "Kathie Moffat" for a femme fatale? That's more like a "girl who sat behind you in homeroom class in '64" sort of name) in Out of the Past (1947), completely screwing over both Robert Mitchum and Kirk Douglas, on TCM Tuesday at 10pm ET (as part of their Kirk Douglas on Tuesdays in September series).

Fun Fact To Know And Tell: Mitchum and Greer got together one last time 40 years later when he hosted Saturday Night Live in '87, in a parody of OOTP called "Out Of Gas." Anybody know if there's aa clip of this sketch anywhere online?

From Robert Mitchum's opening monologue that night: "All I know is that in ninety minutes I go to a party."

Maybe it's just me, but Mitchum always struck me as a flaming asshole (and no, that's not 'code'), on and off-camera. Kirk wasn't exactly the king of nuance, but he at least TRIED to seem human, even if his son can't accomplish it. Hell, Lloyd Bridges, compared to Douglas, was "subtle," but at least he raised his kids pretty decently. Not ENTIRELY perfect, but not to the Mitchum level of assholiness, at least not as far as I've seen.
I must admit total ignorance of Ms. Greer (more acquainted with Germaine), but I'd like to reiterate my earlier humina-humina on that hot-as-hell picture.

Happy Belated Birthday Ivan, been stuck in the salt mines far too much recently