Right wing culture warriors often complain about unilateral disarmament, since they are forbidden by the Washington Naval Treaty of 1922 from deploying the N-word, while their enemies are free to use it in Def Comedy Jams and rap songs without fear of anybody invoking the Geneva Convention.  Likewise, gays can call one another the F-word, while comediennes are free to traffic in antique stereotypes of their own sex.  Wingnuts, on the other hand, are only safely able to mock White Evangelical Christians, and really that just amounts to bullying, because those people are legitimate victims who are under siege by the oppressive powers of Big Minority.

But today we're confronted with a question of moral and social etiquette that I don't believe has ever been raised before: is Jim Hoft entitled to gleefully repeat slurs about people with cognitive and learning disabilities, simply because he's the Stupidest Man on the Internet? 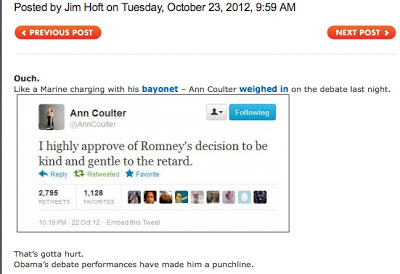 Help me out here, because I really don't know.  Is this like Jackie Mason telling Jewish jokes?

Also, since the last bayonet charge by the U.S. military was in 1951, the sentence "Like a Marine charging with his bayonet -- Ann Coulter weighed in on the debate last night" doesn't seem to make a lot of sense, unless Leathernecks were issued black cocktail mini-dresses during the Korean War, or Coulter was felled in mid-tweet by a burst from a Chinese burp gun.
Posted by Scott at 11:41 PM

Email ThisBlogThis!Share to TwitterShare to FacebookShare to Pinterest
Labels: Elevating the Discourse, Proud to be an American

I think he means that she bungled the mission and we ended up in Korea for the following six decades.

I'm waiting for Mooselini to weigh in.
~

"Ann Coulter weighed in on the debate last night"

Ann Coulter neighed in on the debate last night....fixed that for you.

The last I heard, the use, possession, or even presence, of bayonets, claymores, sabres, scimitars, sgean dubhs, poignards, switchblades, and etc. are not part of the official pre-bout body-weight assessment ceremonies sanctioned by the Association of Boxing Commissions.

Wonder what class Coulter would be in, if she decided to put her scrawny physique where her venomous pie-hole is, and don the gloves? (I was watching "Gentleman Jim" last night, can you tell? ahhh, Errol... )

Imagine what would have happened if Flashman from the MacDonald books met up with Coulter. Heh.

Sarah Snobilly did weigh in... And she placed the blame right where it belongs!

On the Shuck and Jive Obama!

Totally Not Racist and this is good news...

If, as you say, the last bayonet charge was in 1951, then her comment was indeed much like that - from an era 60 years ago.