Do bugs lead to buggery?  Learn the facts in this think piece inspired by all the sex and violence in Sheri's garden.  Originally published September 16, 2003. 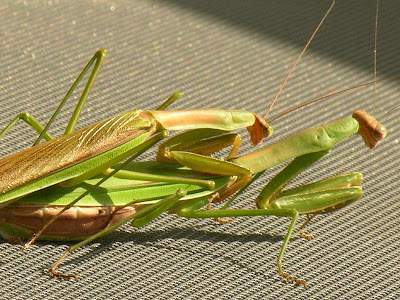 Mantis Love Shows Why You Should Boycott American Airlines

We had our first frost of the season Saturday night, freezing some of the squash -- but alas, there's still plenty more, so I guess I'll have to eat some of it.  Seeing their plant comrades shrivel up and die seems to have had a salutatory effect on the tomatoes, who have finally gotten with the program and starting producing comestibles.

But my main crop this year seems to be bugs.  Mainly giant grasshoppers (I’m thinking of remaking THE BEGINNING OF THE END, since I do have a cast of thousands of ‘hoppers to draw upon).  But also some big, disgusting squash bugs (which do, as their name indicates, squash quite satisfactorily), and some regular-sized, repulsive earwigs.  Oh, and a large population of praying mantises, who do their part for bug solidarity by eating the other bugs, thus ensuring there’s just enough squash the bugs don’t eat to encourage the humans to plant more next year, which the bugs will eat, and so continue the cycle of life.

A couple of days ago I was happy to spot a large female mantis in the chrysanthemums-–I could tell she was a female by her protruding stomach, which meant that she was ready to lay her eggs as soon as she found a mate to fertilize them.  Or, that she was depressed about the mantis dating scene, and was drowning her sorry with pints of Ben & Jerry’s Grasshopper ‘n Earwig ripple.  In any case, I was hoping that she would place a mantis personal ad or something, because I looked forward to the pitter-patter of little mantis feet next spring, leading to large mantis mouths swallowing grasshoppers next summer.

When I saw her today, she had that special glow which meant that she had found her soul mate.  The fact that she was devouring the head of a male mantis, whose twitching legs seemed to indicate a mild distaste for the post-coital snuggling, only strengthened my conviction that it was love, love LOVE! (I thought about taking a picture, to share the joy with you, but then decided that the new couple deserved their privacy).

Anyway, this beautiful re-enactment of nature’s old story of boy meets girl, boy has sex with girl, and girl eats boy’s head, got me looking for something in the news to celebrate heterosexuality.  And NewsMax, World Net Daily, Cybercast News Service, etc, didn’t let me down, providing recent items showing how big corporations are seducing our youth into becoming gay through their nefarious plan of treating homosexuals like regular people.

(Okay, these articles aren’t a celebration of heterosexuality as much as a bashing of non-heterosexuality, but the only paean to straightness I could find was this sentence in a piece (Abnormal Sex Violates Nature’s Laws) by Newsmax’s Wilson C. Lucom: "It is a fact that cannot be denied: You would not be alive today to read this message if your mother and father were homosexuals who would not have children."  While true enough, I suppose, it's just not inspiring and ennobling enough to do justice to sight of the female mantis eating the male’s head.)

So, what I’m going to cover today is how American Airlines, by helping to sponsor the North American Conference on Bisexuality which was held in San Diego a couple of week ago, poked a finger in the eye the Traditional Value of heterosexuality, and so we should never fly with them again.
***
In an article titled American Airlines Cuts Jobs But Sponsors Gay Events, Paul M.Weyrich, Chairman and CEO of the Free Congress Foundation (dedicated to freeing Congress and other dissident groups who have been jailed for alleged acts of subversion) reports (for both NewsMax and CNS) that:

American Airlines used to pride itself on being an airline that was "doing what we do best."  Most people would think that means getting travelers to their intended destination quickly and efficiently, making the experience of flying as pleasant as possible.  [Note: Nobody who had actually flown on AA would think that, but that’s a blog for another day.]  But defenders of traditional values know that what the airline does "best" is to be a major corporate sponsor of leading youth down the wrong path, one that can lead to poor health habits, even an early death.

Yes, studies have shown that the biggest threat to the health and well-being of our young people is sinster, shifty-eyed airlines, who meet our youth in seedy nightclubs or public restrooms, and then lead the naive youngsters astray with seductive promises of Frequent Flyer Miles ("First 10,000 miles are free, kid").
Well, actually Paul is upset about AA helping to sponsor the conference on bisexuality I mentioned above. He continues:

Millions of believers in traditional values fly on this airline and it is an outrage that they are using our dollars to subsidize a conference like this.

Well, technically, once you give your money to AA in exchange for goods or services, it is THEIR money.  But I guess the Traditional Values people could treat the airlines like panhandlers and tell them, "I’m sorry, American, but I’m not going to pay you for that ticket to Boise because I know you’ll just blow the money on booze and Bisexual conferences."
Paul continues:

This is no aberration. American has made it a point to cater to the homosexual/bisexual market, placing money above the defense of our traditional morality. On Sept. 12-14, in Washington, for instance, the airline is listed as a sponsor of Capital Classic XI, a gay and lesbian tennis tournament.

Personally, I think we should boycott ALL businesses that place money before the defense of traditional values.  You know, like how Halliburton is putting money above the traditional value of charity and good Samaritanism, and demanding to get PAID for reconstructing Iraq.  So, I say we all refuse to buy any of Halliburton's . . .whatevers.  And we should also boycott all companies which sponsor tennis, on the principle that I don't really care for it, and then pressure them to spend their money ("OUR money") on stuff I do like, like Mystery Science Theater 3000.

Paul goes on to say that while the boycott of Disney for its shameful "gay days" didn’t actually do any good, American Airlines, being a lot smaller, less diverse, and in worse financial shape than the Mouse Kingdom, should be easier to bring to its knees (as it were).

He then states that AA "is not the only corporation that has sent traditional values crashing," and mentions that William J. Murray of the Religious Freedom Coalition ("Fighting for Your Freedom To Not Be Free of Religion"), "is on the warpath about Orbitz, the online travel company that has been airing TV advertisements featuring a homosexual marionette making moves on a man at a swimming pool." Because when our puppets turn gay, you know that our society is doomed, DOOMED!

Oh, and per Murray, it doesn’t even make good business sense for Orbitz to court the homosexual traveler, since "less than 1 percent of men are actually practicing homosexuals" and therefore "each homosexual would have to spend $137,000.00 per year on travel to match that spend by normal heterosexual men."  And if that normal heterosexual man is scared that gay puppets will hit on him at the hotel swimming pool, he might just take his $137,000 and stay home this year.  I wonder if Orbitz has thought about THAT!

For their part, CyberCast News.com (Financially Ailing Airline Blasted for Sponsoring Bisexuality Event) gets a sound-bite from Robert Knight, director of the Culture and Family Institute (which presumably makes families watch PBS and visit art museums), who says:

"Perhaps when parents see their sons and daughters lured into homosexual experimentation, they will look at American Airlines, Subaru and the other corporate promoters of homosexuality as the cynical, uncompassionate entities that they really are."

You know, I can buy the fact that AA and Subaru are luring my sons and daughters into homosexual experimentation (could those Paul Hogan Outback commercials have been a MORE blatant pitch for the gay life-style?)  But the idea that corporate entities are really cynical and uncompassionate??? No, that I will never accept.

But, just as I was ready to vow that AA would never get a dime from me again (well, I had already vowed that, based on a plane trip from hell that left me stranded at the Dallas airport overnight -- but this time the boycott was going to be MORAL), I read this article (Bisexuality Conference Misrepresented American Airlines' Role) from TownHall news, pointing out that AA didn’t actually sponsor the Bisexual Conference, they just provided a group travel discount to attendees, like they do for "hundreds of other meetings of all kinds." Um, never mind.

But, per TownHall, we shouldn’t blame CNS and the rest for misreporting the situation; no, its bisexuals’ fault, for thanking AA for the discounts and thus misleading the eager perversion-spotters.  And besides, AA is still going to hell:

The misrepresentation of American Airlines' role in the bisexuality conference may have been spawned by semantics or formalities [or poor reading comprehension skills], but the company's affinity among homosexual advocacy groups is readily evident.
The Human Rights Campaign (HRC), an advocacy organization for homosexuality and bisexuality, gave AA a perfect score in its most recent Corporate Equality Index, which rates the policies of U.S. companies as they relate to homosexual employees and consumers.

Til then, Thunder, you'll have to settle for <a href="http://www.youtube.com/watch?v=2Sar5WT76kE:>NASA Johnson Style</a>, which is kinda fun.

Very nice, Chris V. -- thanks for that link!
Due to oldness, I've allowed myself to be exposed to maybe 3 minutes of the original Gagnam Style vid before going on to other domestic pursuits. But I bet the NASA thing is just as good!

Sex between solitary hunter-predators calls for plenty of protocol. What the human biological excuse(s) may be, I know not. We're social omnivores, you'd think we would have come up with a workable system by now. But nooo.

As far as I can tell, humans have some of the strangest mating rituals on the planet.

You know what -- I'm not even gonna ask what you did with your weekend...


*Hell, may even be a pretty good week.

You're welcome, Lil, and yeah, I've seen cats do it, and it doesn't look real consensual.

Mostly it looks like the female fights it off until finally saying oh the hell with it, and resignedly takes a rogering.

Incidentally, I derive a great deal of fun from the original Gangnam Style song, whenever it plays on the jukebox down the pub, and get up and perform the Gangnam Dance as performed in the video, which previously was the prospector dance performed by Walter Huston in Treasure of the Sierra Madre.

Same footwork, swear to God, hope I don't break a hip or something.