Sundays With S.Z.: The Greased Up Granny Edition 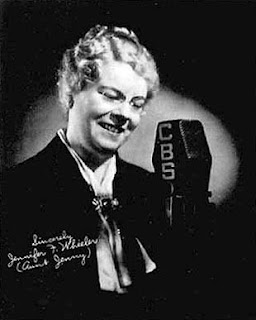 Before settling on bad movies and wingnuts as her metier, S.Z. explored the depth and breadth of blog fodder, from psychoanalyzing the characters in "Family Circus," to actually cooking the horrible recipes in James Lileks' The Gallery of Regrettable Food.  The latter led her to make the acquaintance of Spry spokesbiddy "Aunt Jenny" and her daily 15-minute soap -- or Vegetable Shortening -- opera.  (Originally published September 27, 2003.)

As I noted a couple days ago, "Aunt Jenny's Real Life Stories" was a soap opera which played on the radio from 1937-56.  The people of the town of Littleton would have problems, then Aunt Jenny would gossip about them with the narrator, and then talk about how Spry could have made things better.  I couldn't actually locate the episode of "Aunt Jenny's Real Life Stories" that went along with Baking Power Biscuits that we used in constructing Magic Meat Pie, but I did discover a 90-second radio ad from Jenny's show.

In the spot, Aunt Jenny is NOT the drawling hayseed depicted in "Aunt Jenny's Favorite Recipes," but sounds instead like an aged Mrs. Drysdale.  The narrator urges her to share her secret for broiling fish (FYI: the secret is to brush the fillets with Spry).  Petunia, Littleton's only black resident, says, "Ummm-mmm!  It sure do sound lip-smackin' good!"  Then the narrator acknowledges the world-wide shortage of Spry (presumably caused by an international gang of Spry thieves), but urges you to "keep Spry on your marketing list until you do get it," because of its unsurpassed blandness.   I guess he'd let you take it off your list now, though.

Shedding additional light on Aunt Jenny and her Spry-empire, investigative Reporter and WO'C reader Ivan uncovered a 1948 Spry radio spot which includes a catchy jingle ("Rely on Spry, S-P-R-Y!"), and an announcer discussing Spry's classified "Cake Improver Secret!"  Jenny, who evidently was suspected of working for the Nazis at this time, couldn't be trusted with the secret and so was not part of this commercial.

I also learned that Richard Widmark made his acting debut on Aunt Jenny's radio program in 1938.  Strange but true.

+ 10:45 AM: "Aunt Jenny's Real Life Stories" -- Spry Shortening.  The story: Molly married Chris Johnson only after her true love, Bill Crawford, disappeared after an airplane crash in South America.  Then Bill returned.  Tomorrow: What did Molly do?

So, with all this background, I bring you my reconstruction of the story behind the biscuits.  I call it. . .

We start with an organ playing the Aunt Jenny theme-song, "Believe Me if All Those Endearing Young Charms." while we watch a tin of Spry spin round and round, making the comical Spry Chef on the label seem to be tossing a pie at his own backside.

We fade into a cluttered parlor furnished in Victorian style, complete with doilies, antimacassars, and antiballistic missiles.  A young woman dressed in the height of 1940s fashion (a macrame plant hanger around her neck, her hair stylishly wrapped around toilet paper tubes), is sipping invisible tea with a middle-aged woman with glasses and Sears-bought dentures, dressed in a paisley gown designed by Peter Max. 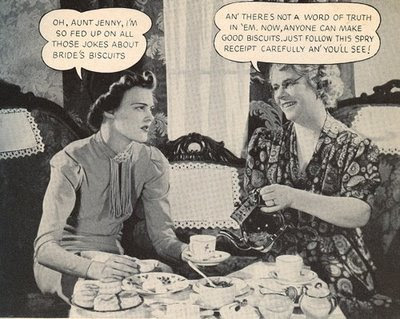 The younger woman, we'll call her Molly, is clearly troubled, and confides, "Oh, Jenny, I'm so fed up on all those jokes about bride's biscuits.  Ever since I married Chris, because my true love Bill Crawford disappeared after an airplane crash in South America and I needed a father for my unborn child, all his mother can do is make jokes about my cooking!  My father is the town's evil bank president, and so I grew up in luxury, never learning to clean, or sew, or make biscuits, and Mother Johnson won't let me forget it!  I'll 'bride biscuit HER, the old biddy.  And I know she's the one spreading those rumors about me having toilet paper rolls in my hair!"


The older woman, Aunt Jenny, says kindly, "An' there's not a word of truth in 'em.  Besides, now, anyone can make good biscuits--or can buy them from Petunia's bakery, which is a heck of a lot easier.  And you can also easily end those 'Bride's Biscuits' remarks -- just follow this Spry receipt carefully an' you'll see!"

Molly takes the folded piece of paper, reads it with apparent shock, and exclaims, "But, but . . .this paper says, 'Take a 3-pound can of Spry.  Grease Old Woman Johnson's back stairs with it.  Then call that nice young gangster, Richard Widmark, and hire him to push her wheelchair down the stairs.' Jenny, what does this mean?!?"

Jenny's eyes twinkle as she explains, "Land sakes, Molly, if you want people to stop carpin' at you, you have to be willin' to take action.  Me an' Calvin have an ideal marriage ever since I banged him on the head with a large, economy-sized can of Spry, causing severe brain damage, after he complained about my pie crust once too often."

Young Molly mulls this over, her large hands gripping the fragile teacup a bit too tightly as she thinks about her various problems.  "You may be right about Mother Johnson, but what I really wanted to talk to you about is my love life.  For you see . . . my truelove Bill is still alive, and has returned from the jungle with a fortune in uranium!  He doesn't know that little Bobby is really his son, and that I married Chris only to escape the scandal of being [pregnant pause] . . .a pregnant girl with large paws.  But I . . .I still love Bill, now that he's rich and alive and stuff, even though I am married to Chris.  Whatever shall I do?"

Aunt Jenny's face puckers in concentration as she thinks of some words of guidance for her young visitor.  Finally she says, "Well, I think I'll need to sleep on this one, since our 15 minutes are over.  But I can tell you right now, if you follow my biscuit recipe and use only 1/3 cup of milk, you would have a mighty hard, dense biscuit.  The kind of thing that could bludgeon a man to death, leaving his widow free to marry somebody else.  Think it over and we'll talk some more tomorrow."

"Oh, and I want to tell all my listeners that Mr. Hitler is the kind of friend America needs right now, and so we shouldn't get involved in his little tiff with Poland.  And I hear he likes cake, and is stockin' up on pure, white, bland, Aryan Spry, which proves that he can be trusted." 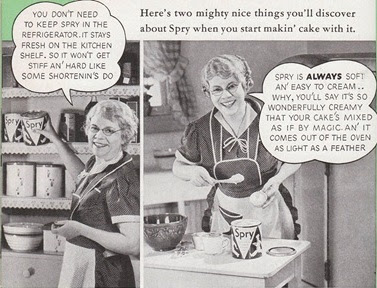 Then, the organ theme returns, the narrator reminds us to tune in tomorrow and to buy plenty of Spry where you work or bank, and our Aunt Jenny Real Life Story for today is at an end. 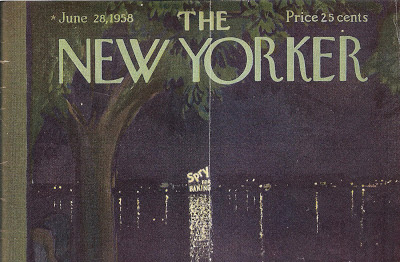 H/T to Marion in Savannah for letting us know this sign existed.
Posted by Scott at 2:11 AM

I remember this one especially because it introduced me, in comments, to the now legendary Doghouse Riley, who upon my WTF at the use of "receipt" instead of the more modern term "recipe," patiently explained to my ignorant loudmouthed self that "receipt" is in fact the precursor of "recipe" and perfectly acceptable. I'm still in awe.

On the other hand, as Carmen Sternwood points out, he's not very tall.

Slightly off topic-- right, when wasn't I-- I think of "Spry" whenever I watch the Coen Brothers' "O Brother Where Art Thou" and the hair finishing product "Fop" (a pomade) is mentioned.

Subliminal Family Circus was my first exposure to s.z.

I am so old I even remember Spry. And the shortage spoken of was probably due to the war. The Big One. WWII. Fats were rationed as was sugar and gasoline. (Think of the lovely dishes that combo could make.)

The Greased Up Granny Edition

I'm also old enough to remember Spry, and actually had a friend who lived across the Hudson River from the infamous "Spry For Baking/Spry For Frying" ENORMOUS flashing neon sign. She had to keep the blinds down just to keep from being driven mad by it.

I vaguely recall Spry too, from early youth. More from magazine ads than anything else, I think. Different things suggest themselves to the child mind; I was quite intrigued by the little Morton's Salt girl, with her great big umbrella and her carton of Morton's that was pouring effortlessly behind her, leaving a trail that was certain to be washed away by the steady rain that pelted down on her as she tripped cheerfully along. Then there was the mysterious Old Dutch Cleanser being; in my kidhood an energetic Dutch -costumed female shown running in strict profile, so that her starched cap completely hid her face. Her clog-shod feet showed at full stride at the hem of her long skirts, and she brandished a cleaning brush. Very purposeful!

Years later the company re-did their logo character as a smiling cutie in a Dutch outfit that smacked a bit of the majorette, or maybe the hatcheck girl. Friendlier, I guess they thought -- but it didn't convey the eternal, existential mystery of dirt-fighting that the old one had. The old Old Dutch lady could have swept Mr. Hitler out the door.

If you really want to hear it, the actual 1939 broadcast is available here;
http://archive.org/details/OTRR_WJSV_Complete_Day_Singles
but it's sadly not quite as wacky as your reconstruction.

It was the greyhound running on the busses that caught my imagination/pity, way back in the 50's & 60's. I always thought the poor dog was so pitifully skinny, and maybe lost... looking for his family.
Morton salt girl bothered me too, I used to worry she'd be in trouble with her Mom when she got home. I adored the Poll Parrot brand shoes- the TV commercial insinuated that if you wore Poll-Parrot, you could FLY! God, I wanted a pair so badly. Never go 'em, tho. It was Keds all the way.

OH. MY. GAWD!!! I got a hat tip! I'm so excited I could just about BURST! So it turns out that there are advantages to being a cranky old fart!

They were half the fun of having feet!

Lancelot, that's an amazing Link -- thanks! I wasted way too much time listening to wax recordings of pipe organs and dead people.