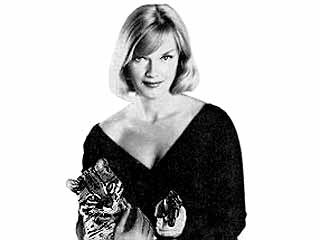 As promised, a new feature featuring old stuff.  Vintage stuff.  Classic stuff, from the buttoned-down mind of S.Z., the gentle genius who founded World O' Crap.  And as we can see from this week's entry, mocking wingnuts never gets old, because old wingnuts never go away.

In this post, originally published on August 22, 2003, Sheri interviewed God about Roy Moore, Chief Justice of the Alabama Supreme Court, who -- as you may recall -- raised a bit of a Church and State stink when he secretly hired workers to install a 5-ton monolith carved with the Ten Commandments in the rotunda of the courthouse in 2001.  When a federal judge ordered him to remove it two years later, Chief Justice Moore flipped him the Yellowhammer (the state bird of Alabama) and was subsequently removed by the Alabama judicial ethics panel (who knew they even had one?).

Now, nine years later, the voters have restored Roy Moore to his former office; and since he went to all the trouble of copyrighting his monument, he must still have it lying around somewhere, so I suspect it's only a matter of time before he sneaks it back into the Rotunda under cover of darkness.  In other words, we've come full circle, so let's relive S.Z.'s exclusive chin-wag with the Almighty (her first post to go viral in the blogosphere, a mere three days after WO'C's founding)...

It seems that this guy Rob Moore is just not going to get his rock out of the rotunda -- at least, not until the media stops covering this story.

And while there have been a lot of people interviewed about the situation (Rob, his supporters, the Alabama State Attorney General, the ACLU, Jerry Falwell, etc.), it seems that nobody has talked to perhaps the key player in all of this: God.

So, I got in touch with God's press secretary and managed to set up a short lunch meeting. Here's a transcript of our conversation:

Me: Thanks for agreeing to talk with me.

God: No problem. I meet so few reporters these days that I felt it was my duty.

Me: . . .Alabama Chief Justice Roy Moore has said "he would be guilty of treason" if he didn't fight to keep a monument of the Ten Commandments in the rotunda of the state judicial building. Do you agree?

God: Yes. But since Ann Coulter branded everybody she doesn't like (Democrats, liberals, women, airport baggage screeners, all the kids who made fun of her girlish crush on Joe McCarthy, etc.) as traitors, treason is now cool and hip.

Me: Moore has also said that he needs to keep the monument in the rotunda "to fulfill the campaign promise that he made to the citizens of Alabama to restore the moral foundation of law." What do you think he means by this?

God: That he wants to do Law & Order, Old Testament-style. You know, stoning homosexuals. Stoning adulteresses. Stoning kids who sass their parents. Stuff like that.

Me: And do you agree with him on this?

God: Hell, no! I sent you people my son and licensed representative to give you Commandments Version 2.0, which has a root code of "Love thy neighbor as thyself." I don't see anybody putting a two-ton granite block of THAT in any state buildings!

Me: So, what do you think of Reverend Falwell's comparison of Moore "with slain civil rights leader Martin Luther King Jr., who defied segregation laws in the white-dominated U.S. South in the 1950s and 1960s"?

God: Well, I hardly need Moore or Falwell to fight for MY desegregation. I AM omnipresent, you know.

Me: I think Falwell meant that it's okay to break "man's law when needed to preserve God's law."

God: I knew that. (Might I remind you of that omniscience thing?) I just thought it was a stupid analogy. And by the way, my law was never "Put a big granite monument of the Ten Commandments in a public place." My law was "Obey the damn commandments, and even more than that, love your enemies. Oh, and don't make a public spectacle of yourself by trumpeting your good deeds in the street or praying to be seen of men. And no worshiping of graven images!" But I guess it's my fault that I didn't package this stuff as "The Complete Idiot's Guide to the Commandments."

Me: And what do you think of Alan Keyes urging of Moore's supporters to "take back America from the unruly courts"?

God: I think that Keyes and Moore should first work on taking back daytime television from those unruly court TV shows! They are annoying, irresponsible, and demeaning to all involved. Plus, they take up valuable air time that could be used for reruns of "Highway to Heaven" and "Touched by an Angel." And "Perry Mason" -- I've always liked that one. Oh, and speaking of sedition, don't you think that what Keyes is advocating comes close?

Me: Um, I really couldn't comment -- except that if being a traitor is now cool, I don't think Keyes is one. One last question: what do you think of Moore's vow to file a formal appeal with the high court “to defend our constitutional right to acknowledge God"?

God: Being omniscient and all, I'm pretty sure that the constitution doesn't say that one has the right to acknowledge ANYTHING by sneaking 5,300-pound slabs of granite into public buildings in the dead of night. Unless perhaps Moore is speaking of the "Pranksters, Hazers, and Practical Jokesters Constitution."

As for acknowledging ME, I would prefer it if people would, you know, visit the fatherless and the widows in their affliction, and keep themselves unspotted from the world. Sure, it's easier to lug around big rocks, but it's not really the way I want to be worshiped. The big chunk o' granite thing just makes me look stupid in front of my friends.

Me: I'll pass that along. Well, thanks for your time. And best of luck to you in your future endeavors.

God. Same to you. See you at the second coming. Um, wear something nonflammable!

There you have it. I hope this ends this little contretemps, and we don't have to read anymore about it ever again. Because it only encourages Moore and rewards him for acting out, and we don't want that. Or the next time he's up for reelection he'll lug the Dome of the Rock into the court house parking lot and refuse to move it, even though it's in a handicapped space, as a way of showing his constituents that he's a moron.
Posted by Scott at 3:29 AM

Thank you and the supermodel/astronaut for this!

If anybody could have gotten that interview, it's S.Z. The Supreme Being knows quality when They sees it.

I will take that advice to heart.

Some inside stuff on the jurist in question: moderate Republicans—and, God knows that's a relative term down here in Alabama—made a move to purge the Tea Party-lovin' head of the state GOP last weekend at the annual conclave, and, with our Dr.Gov. Dr. Robert Bentley and many other proper gentry lined up on the side of moderation, it looked like common sense was a lock.

But this is Alabama.

Sure enough, the righter-winger prevailed in the intranecine warfare, and who do you think was the only prominent state GOPer to have backed the ultimate winner? Judge Commandments himself.

If God took a hand in this, she sure has a sense of humor...