Grab Some Top Gun Off the Bottom Shelf 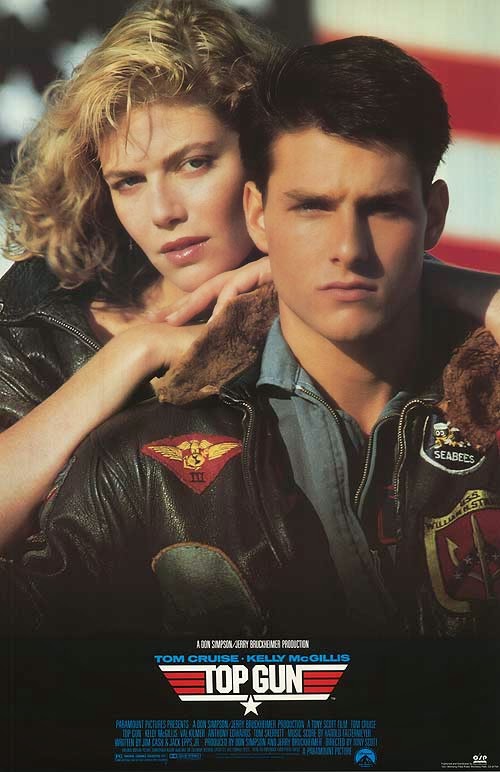 As we know, Drama is Conflict, and this drama has so much conflict that it actually opens with an argument between the titles and the theme song. According to the superimposed dateline, we’re in the INDIAN OCEAN. PRESENT DAY. But the hit single by Kenny Loggins insists we’re in the DANGER ZONE, which seems to be a place where jets ceaselessly take off and land while men in glans-shaped helmets handle big hoses and vogue.

Tom Cruise is a Navy fighter jock whose callsign -- “Maverick” -- suggests he’s a reckless, hot shot pilot who doesn’t play by the rules, probably because he’s actually sitting in a mockup of a cockpit on Stage 14 at the Paramount Lot, and the rules don’t technically apply to the military equivalent of a dollhouse. Tom flies with “Goose” (Anthony Edwards), whose callsign suggests he’s either the comic relief, or has an enlarged and delicious liver. We join them for a jet-fueled playdate with “Cougar,” whose callsign indicates he’s a mature woman with a taste for boytoys, and his backseater “Merlin” (Tim Robbins, who we know from Bull Durham has penchant for older ladies, so they seem like a fun couple).

When they get into a hassle with some aerial Communists, Cougar loses control of his sweat glands, but Tom saves the day by flying upside down and giving the Russians the finger. Back at the aircraft carrier, Tom’s flying makes a man spill  his coffee, so his  commanding officer, Mr. Clean, shouts “Your ego is writing checks your body can’t cash!”, although you’d think it would be the other way around, since between the two of them, the body is the only one with a photo I.D. Then he sends Maverick and Goose to fighter school at “Fightertown U.S.A.”, home of the Fightin’ Fighters.

Tom rides his motorcycle to Top Gun school because apparently it’s Danger Zone adjacent, and suddenly we find ourselves in a class taught by military hardass Michael Ironside (callsign: “What Do I Need a Butch Callsign For? My Name is Ironside), but it’s a different class than the one taught by military hardass Michael Ironside in Starship Troopers. A beefy, bleached blonde pilot (callsign: “Rocky Horror”) turns to Val Kilmer (callsign: “My Career Didn’t Really Work Out the Way I Thought It Would”) and whispers in his ear, “This gives me a hard-on.” Meanwhile, Rick Rossovich (callsign: “Slider,” I guess because “White Castle” was already taken) casually slips his arm around Val’s shoulders from the opposite side, so this sandwich has three all beef patties. But Val is too busy fingering his ballpoint pen as he and Tom trade smoldering glances to dispense the Special Sauce.

Cut to a bar, where Val and Tom are face-to-face, drinking longnecks and making steamy eye contact again. But it was all just foreplay, because Goose and Tom make a bet: first one to have intercourse with a woman wins twenty dollars. Tom immediately picks Kelly McGillis out of the crowd and tonelessly serenades her with “You’ve Lost That Lovin’ Feeling.” It’s a justly famous scene, because if you watch closely you can actually see the moment when she became a lesbian.

Now we’re back in class, and guess what? We have a substitute today, and it’s Kelly!  But instead of just showing us a film strip, we get more flying scenes: lots of “He’s on our tail!” and “Show me what you got!” and “You’re MINE, now!”  They “turn and burn” and “go ballistic,” and – well, basically it’s the Kama Sutra meets the Urban Dictionary.

Say, how about a stunningly long, boldly gratuitous volleyball game, in which Val, Slider, and Tom are hilariously oily and turgid? But Goose does teach us a valuable life lesson: When you’re the comic relief you don’t get the girl, but you do get a shirt.

Tom rushes directly over to Kelly’s house to fumigate it with his stank and pheromones while he fills us in on his dead dad (he always seems to have one) and why it drives him to be awesome.  The next day after class they have silhouette sex (and by “sex” I mean they lick each other so much this movie should be called Top Tongue).

More flying scenes, did you say? “Stick with it!” Come on come on come ON!” “Was it good for you too?”

No? Well, how about more traditional erotica? Let’s head to the locker room, where everyone is in towels and beaded with moisture. Val lounges seductively against a pillar like Maria Montez, while Tom turns away from the camera, puts a foot up on a bench and points his ass at us almost menacingly, as though his rectum were the barrel of a gun.

More flying? Sure, dig in, we’ve got plenty. Unfortunately for Goose, it’s the end of the second act and Maverick needs motivation, so they blunder into their neighbor’s jet wash and go into a flat spin. Tom ejects safely, but Goose collides with a plot point and dies.

Tom visits Goose’s grieving widow, Meg Ryan, to pay his respects, but as we’ve seen, he’s driven and competitive, and just winds up getting in a grief-off with her. Then he mopes around for a few scenes, but fortunately, the Indian Ocean is having a crisis (just a regular crisis, not an identity crisis like it had at the beginning of the movie).

Val flies off into combat, while Tom walks around his plane and rubs the rounded tip of the missile.  Meanwhile, that same guy from before announces another hard-on.

Tom and Val hug on the deck while men pump their fists in the background.  Then Tom throws Goose’s dog-tags off the carrier, symbolically freeing himself from the burdens of their relationship which was frankly going nowhere. Commander Clean sends him back to Fighter Town U.S.A., this time as an instructor. Not a flight instructor, I assume, since he can’t even walk to the bathroom without going into a flat spin, but maybe they’ll give him an autoharp and let him teach music, or be the faculty advisor for the Pep Squad or something.

Oh, wait…There’s a tacked-on conclusion where Kelly reminds us that we hate the Righteous Brothers now by playing “You’ve Lost That Lovin’ Feeling” on the jukebox and sneaking up on Tom while he sits at the bar. I mention this only because director Tony Scott did a masterful job of framing the shot so you can’t see Tom's booster seat.

I am SO glad that I've never gone to the minimal effort of watching this Ronnie Ray-Gun war-hawk/military-industrial-complex circle-jerk BULLSHIT.

You are a far, far braver man than I, Scott. I hope that you are able to sleep after tormenting your corneas with Thomas Cruise Mapother IV's scenery-gnawing idiocy.

Sweet dreams! Well hell, better than Anthony Edwards got out of this shit-fest!

If you want the same plot without the Regan era jingoism, just watch Pacific Rim.

Me, I simply watched Hot Shots instead and the obvious conclusion: man, Top Gun musta been really stupid.

"It’s a justly famous scene, because if you watch closely you can actually see the moment when she became a lesbian."

Aaaand, that's why I love ya, Scott (tho not in a Cruise/Kilmer kind of way, lol) :little gems that will make me laugh for days.

Thanks, man, I needed this one tonight.

"Top Gun" and "Hot Shots" make a good dounle feature, if you can make it through enough of "Top Gun" to appreciate the jokes in "Hot Shots."

Pioneers should be appreciated, even in cheesy film, and "Top Gun" certainly plowed the field of homoerotic military movies long before "300" or "War Horse."

First feature to be shot in super-35. The animporph primes were too heavy or perhaps too bulky to fit the aircraft. Super-35 is 3 perf/frame, no room for soundtrack so more economical.

Thanks, Keith, that's a cool piece of trivia. It doesn't make me like the movie any more, but it's fun to know.

Also, too, what Kordo said.

if you can make it through enough of "Top Gun" to appreciate the jokes in "Hot Shots."

I find that plenty of hot shots get me through Top Gun.

(callsign: “Slider,” I guess because “White Castle” was already taken)

And because "Belly Bomber" is just so not a fighter jock nickname...

I didn't like the picture either. Tom Cruise was classic "Basket Without A Brain." Tony Scott checked out, perhaps unhinged and a bit haunted by his creation. Perhaps no connection but one can't help but wonder.