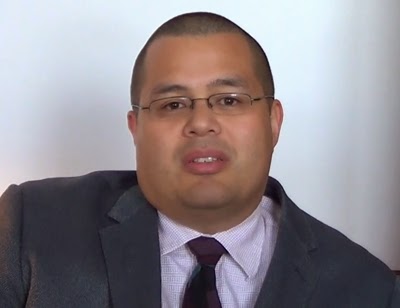 Hey guys, look who it is!  It's Brother From Another and Another 'Nother Mother, Professor Robert Oscar Lopez. You may remember ROL from his sad, Dickensian life as a boy who caught Teh Ghey from living in a trailer with two unvaccinated lesbians, or perhaps you recall his LOL-worthy theory that Homosexuals are modern slave masters who oppress Blacks by using them as breeding stock to replenish their plantations, and by "plantations" I mean "mobile homes."

I am a professor.

Really?  Can you make a radio out of coconuts and bamboo?  I didn't think so...

Among the many farces of academia, hiring season is exceptional.

Okay, sure, somehow you were hired to teach at the college level, but don't you agree that's really more tragedy than farce?

Everyone in the department pretends that we are completely collegial and endearing, while job candidates arrive and audition for us. We go out to lunch with the aspirants and small talk ensues.

And that's when the Olive Garden turns into the Garden of Gethsemane! Except instead of Judas kissing Jesus, your department head hogs the breadsticks!


This time around, many of my colleagues courted the candidates by musing about their childhoods over dinner. Colleague X talked about how he was the first one to attend college because his father only finished up to tenth grade. Colleague Y recounted arguments about classic books with her parents who were both English teachers. Colleague Z reminisced about the days when her father, a preacher, prepared for his weekly sermons.

And then there’s me sitting there. I’d love to say: “I was raised by a lesbian who took me to a motor home on the weekends so she and her lover could hike and build wooden decks together.

So it was like growing up with slightly more butch versions of Bob Vila and Norm Abrams?


When I worked in my mother’s clinic doing typing and filing, I transcribed the files of her mentally ill patients, some of whom were gay or transgender, so I knew everything about sex a kid could possibly imagine by the time I was fourteen.

Yeah, I don't want to get into a pissing match about who had the more picaresque upbringing, Prof, since compared to a lot of people I got off light; but given that my mother was mentally ill and began threatening to murder me in my sleep when I was five years old (Insomnia 4 Life, yo), I'd totally be willing to trade my night terrors for your light typing and filing.


By the time I was sixteen, I was getting in lots of trouble.

Well I would hope so, given all that free sex ed you were getting. Hell, if I'd had your advantages as a teenager I'd have been working my way through the Kama Sutra and the Collected Works of Henry Miller like somebody following one of those IKEA chifforobe-assembling diagrams.


By the way, because this was my life and I refuse to lie about the problems it caused me, I have been dubbed an anti-gay bigot by all the major gay advocacy organizations and the other people at this table have banned me from the department listserv and newsletter.

Yeah, cry me a river and pass the Five Cheese Dipping Sauce.

Nervously, with a chair wedged against my bedroom door at night. But I thank my lucky stars that at least I was never subjected to non-consensual clerical work!


For all the talk about fighting privilege, “speaking out” and “breaking silences” are actually not what the left wants children of gay couples to do.

They want them to do The Macarena. No one's quite sure why.


Everything about my life is dangerous to discuss

Cross the wrong people, and the forces of Big Lesbian might just push you off the top of a high dental dam.


because if I tell the truth about where I came from, I can be accused of homophobia (which has happened) and fired (which has come near to happening).

Not near enough, apparently.


I wish they -- the pro-gay liberals -- would make up their minds.

You're right. Let's quite hemming and hawing and just order the Pasta e Fagioli, we gotta be back at work by one-thirty.


Either be radical and anti-establishmentarian, and accept uncomfortable voices into the conversation -- or else shut up and let me talk about Homer’s Iliad. Which I’ve read in Greek.

I don't know which Greek you were in, but he was pretty patient to let you stay in there for the length of  an entire book. (Was it Spiros? He's pretty chill...)


Children of gays, or COGs, are ready for a turning point.


The gay community raised us, sometimes with love, and often with a bit of inconsiderate self-interest.


Too many of us were asked to keep secret how hard the whole experience was. Many times siblings turned against each other based on which brother or sister “broke ranks” and decided to speak the truth while others played along to keep Mom and Mom or Dad and Dad happy.

In other words, you're saying that sometimes the children of gay parents experience sibling rivalry, and compete for parental approval?  That is shocking, in that I never knew the Smothers Brothers were raised by lesbians.

Actually, I guess should read, "Moms always liked you best!"

After decades of decrying the pain of “the closet,” the gay community remains largely unwilling to uncover the true feelings of the children raised in their midst.

I assume they simply wanted to spare us, since we've all heard children kick and scream and whine and fuss and write columns for American Thinker.


Don’t think we are only disappointed with liberals. We find ourselves wondering what happened to conservatives opposed to same-sex marriage. The anti-gay-marriage activists gave us much less attention than they gave to the cake-bakers, florists, and innkeepers who were Christian and who didn’t want to service gay weddings.

I don't know if you can catch syphilis from an attention whore, but I think I'll go put on a condom just to be safe...


Aside from canned platitudes extorted from kids still under gay adults’ custody, the terms of the same-sex parenting debate were always dehumanizing statistics. “Who had better outcomes?” “Who has a lower percentage of autism?” “Who has greater attachment security anxiety?”

"Who has the highest incidence of Adult Onset Self-Pity Parties?" "Who has the crappiest argument?" "Who's the biggest drama queen?"


Until now. The dissident COGs who refuse to follow either side’s party line are growing in number. We will not be left out of this marriage showdown about to go before the Supreme Court.


This time around Anthony Kennedy will not be able to assume he knows what we are thinking, and the Human Rights Campaign will not be able to tell us what we are supposed to want. We won’t let people use us anymore. Keep your eyes out for our briefs against gay marriage. Even if we can’t change history, at least we want to be part of it. Our time has come. We deserve it.

And I think I speak for all of us when I say: here's hoping you get exactly what you deserve.
Posted by Scott at 1:04 AM

Email ThisBlogThis!Share to TwitterShare to FacebookShare to Pinterest
Labels: Nutty Professors, Teh Gayz

Yeah, it really sucks that Professor Lopez didn't have the childhood he thinks he deserves. It's fantastic that he has overcome all of the obstacles in his way to become a Professor and leader of a (minor, misguided) national movement. In honor of his efforts, and in recognition of all that he has overcome, I will give him a single ritz cracker. Cause to hell with him for making a career out of blaming his parents for everything he thinks is wrong with him. At some point doesn't an adult have to chose to make the best of what they have from where they are? This guy is as sad as Miss Havisham, making his whole life an obsessive memorial to a childhood disappointment.

Keep your eyes out for our briefs

When I worked in my mother’s clinic doing typing and filing, I transcribed the files of her mentally ill patients, some of whom were gay or transgender, so I knew everything about sex a kid could possibly imagine by the time I was fourteen.

Am I wrong, or would that be a major breach of medical ethics? If so, maybe he has a point. Still, like Scott said, I'd trade him even up. No motherly death threats (dayum, dude), just an entire childhood full of...well, actually it was kind of empty...

Letting your teenager transcribe medical records does indeed violate patient confidentiality, m-m tap, and today under HIPPA rules would warrant a big ass fine. So Pro Lo's mom did at least one very bad thing with her son. But I wish we still had Ann Landers around to tell this guy to grow up and get over it. For a gay who hates gays, he sure is a wuss.

"Guy who hates gays..." Or maybe Freud had a point.

This guy is what I like to call a "snivel-snot".

"Guy who hates gays..." Or maybe Freud had a point.

Well, Doc, since P-Lo claims he became gay (and a drug addict) from living in close proximity to lesbians (but is now happily straight and high on Life -- specifically, that part of Life where you tell other people how to live theirs), Freud, even if he didn't have a point, would certainly have a field day.

I think that judging from P-Lo's travails, it's clear that The Gayz emit some kind of irresistible Moral Turpitude psychic wave or pheromone or some-such. A same-sex couple would naturally intensify the effect. The poor kid never had a chance.

However, when it comes to being an asshole, he's clearly a self-made man.

most of his rating on "Rate Your Professor" are actually good. I wonder how many he wrote himself.

Holy smokes, this guy. Does he actually think his childhood was the worst because his mom was a lesbian? And that's his argument against same sex marriage?! By that reasoning, Scott should be against opposite sex marriage!

He's Professor Oscar Meyer Wiener, and soon there will be nothing left (or right) of him.

After decades of decrying the pain of “the closet,” the gay community remains largely unwilling to uncover the true feelings of the children raised in their midst.

I murdered my queer parents when they neglected to give me red cha-cha shoes for Christmas.

Man, where is the like button? RE meanie-meanie tickle a person and Dr BDH - this having your teen aged kid type up your psych session notes for you is a big red flag for me. I seriously doubt this actually happened - more likely he broke into the files out of prurient curiosity and came up with this 'child labor' story as an alibi for knowing who was what.

Arguably if Robert Oscar's mom had been able to marry her girlfriend she wouldn't have had to do whatever it was with the mobile home on weekends that traumatized him so. They could have just hung out in the suburban house and let him watch TV. His sad story definitely speaks in favor of marriage equality.