It's been quite a long time since we've checked in with Muscular Christian Pastor Doug Giles, the man whose sermons about the godhead come with a side of dickhead, but all good times must come to an end, so... 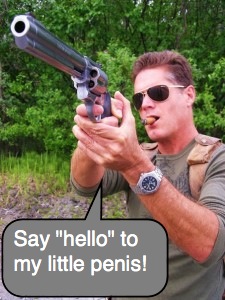 HEY, WUSSIES: Quit Asking, ‘How Many Are The Enemy, But Where Are They?’

I’ve been reading Steven Pressfield’s musings on warriors and warfare and this quote struck me like Ike Turner punching Tina when she fell flat while singing, “Rolling On The River”.

The rule in comedy is "always punch up, not down," but Pastor Giles is a confirmed contrarian and likes to take the opposite tack, in this case, literally.


“The Spartans do not ask how many are the enemy but where are they.” - Plutarch, Sayings Of The Spartans

Yes, the Spartans were manly, but unlike most men, they'd stop and ask for directions.


And that, my friend, is one of the big differences between a warrior and a wuss.

Or to put it another way, a wuss spends less time slathering on olive oil and wrestling in the nude, and more time learning how to use the Waze app on his phone.


A wuss, you see, looks for an excuse to run

Which is why the biggest wuss in the world is Usain Bolt.


but a warrior looks for the opportunity to throttle the enemy.

Especially if she's a girl singer who's having pitch problems.


The strange thing is that nowadays, in our aggravated state of pussification

Wait -- are we wusses or pusses? I don't meant to question your testicle weight, but it seems to me a real man would dither less about his consonants.


one would call the inquirer of how many foes are arrayed against them “a wise calculator of the risks involved” and whether or not they are able to contend with what they have at hand or if they should retreat. When, in reality, such questions, often times, are nothing but cowardice masked in some shrewd sounding horse-crap that doesn’t make one sound like a scared quail.

Exactly. Custer eschewed bean-counting cost/benefit analyses and asked only the Spartan Question, and look how well that worked out for him.

Smart enough at least to know we don't call it "Cali."


...when it came to books and business, who would always talk himself out of startups and personal goals because he always viewed how “insurmountable the obstacles were” rather than how he could possibly tackle his mountains. This attitude equated this brilliant, book-smart buddy’s being a stay-at-home dad versus an alpha-male butt-kicker.

Yes, why would any seemingly intelligent man settle for living life on his own terms and spending time with his children when he could let himself be browbeaten into disastrous investments and needlessly violent confrontations by a guy who works one day a week as the pastor of a pop-up church and spends the rest of his time shooting at tame ruminants on canned hunts using guns and ammo bought with cash skimmed from the collection plate?

I thought you said this guy was smart.

I completely agree, although probably not for the same reason.

Politically speaking, I wish those who “represent us on the Right” would take this warrior mindset to heart versus rolling up in the fetal position and wetting their massive Republican diaper once they’re faced with the teeth of the liberal beast.

What Doug calls "the teeth of the liberal beast" we call "the vagina."


The Left zealously sports this “die or be killed” attitude as they approach our culture wars, whereas those on the Right are mostly/merely butt-smoochin’ wind-testers,

Point of order: if you're within smooching distance of the butt, do you really have to test the wind? It seems like it could only be coming from one direction. (I'd think tasting the wind would be a bigger issue...)


From an ecclesiastical standpoint, don’t even get me started on how this lame spirit has taken possession of the brethren’s craven soul.

I'm not sure I want to get you started on any ecclesiastical issue, Doug, since your clerical bona fides are based on leadership of a congregation which materializes, Brigadoon-like, in Ballroom A of the Ramada Inn, and your sermons -- judging by the care and thought you put into these Townhall columns -- probably consist of you standing at the pulpit, firing two cap pistols into the air and hollerin' like Yosemite Sam.


To say that the church has become a toothless lion to cultural corruption would be akin to saying Hillary Clinton sort of lies. Fortuitous, we are not. Unlike Jesus, most pastors would rather fly than fight; and I hold them primarily responsible for the coarsening of our culture because I believe the state of our nation is due largely, in part, to the “holy nation” within unwilling to make principled stands when holy writ and common sense demand a throw down.

So the next time you see tits on HBO, send a thank you card to Garner Ted Armstrong.


Here’s the bottom line, folks: if anything is worth doing it will be fraught with sick hurdles.

Listen Doug, I think you should at least see me in the shower first before you start throwing around pejoratives like that.


The sooner we take on the warrior mentality, the quicker we’ll be talking about great victories. So, from now on, talk yourself into the battle instead of how you can get out of the battle.

I'm forced to agree with Pastor Giles -- although again, not for the same reason -- since I also think "tak[ing] on the warrior mentality" would be a great victory, allowing us to bring our fanged vulvas home by Christmas and easing the burden on our landfills, which are currently choking on massive Republican diapers.
Posted by Scott at 1:08 AM

There are two kinds of people in this old world (Therefore an old "joke".): People who divide the world into "warriors & wusses" & people who don't.

Also, he's a wuss if he doesn't say "wussie" for that extra KWIM effect.

I don't think he knows what "fortuitous" means.

versus an alpha-male butt-kicker

Fortuitous, we are not.

Thesaurus user, he is not.

"Here’s the bottom line, folks: if anything is worth doing it will be fraught with sick hurdles. "

I don't know how he'll do against Big Gay, but he can kick the shit out of a metaphor.

“The Spartans do not ask how many are the enemy but where are they.” - Plutarch, Sayings Of The Spartans

Yes, the Spartans were manly, but unlike most men, they'd stop and ask for directions.

Best laugh I've had all day (yesterday, not this morning).

Spartan women would tell their husbands going off to war "With or On". This was supposed to be a shortened version of "Come back with you shield or on it!" which seems kinda unnecessary to me. Like telling one's husband "Come home with a full tank of gas, or walk home!" HUH?

Meanwhile... I was surprised & perplexed at Pastor Swank's venom. Then I realized it was a totally different Man O' God. Oh, these muscular christians!

“The Spartans do not ask how many are the enemy but where are they.”

Ah, the wise words of Agis II, who was incompetent and ineffective even by by the standards of Laconia, leaving one with the suspicion that 'Agis' was Greek for 'Bush'.

he led an army of Peloponnesians and their allies as far as the isthmus, with the intention of invading Attica; but they were deterred from advancing farther by a succession of earthquakes [YEAH RIGHT] In the spring of the following year he led an army into Attica, but quit it fifteen days after he had entered it. [...] Agis with the whole force of Lacedaemon set out at the same time and marched to the frontier city, Leuctra. No one, Thucydides tells us, knew the purpose of this expedition.