Sorry guys, but yesterday was a bear, and not the fun, Pendleton-wearing kind that'll take you to a Lady Gaga concert at LA Live, then buy you a round of artisanal mojitos in West Hollywood and let you groom him for nits. No, it was more the driving-to-the-Valley-for-meetings type, and when it was all over I just didn't have enough surplus vim to throw a birthday bash, so I missed the natal anniversary of charter Crapper AnnPW. Sorry, Ann! (Or as the guy who played Gilbert in Anne of Green Gables used to say it, "Sore-ry, Anne").

But one day late, that's not so bad, is it? There must be some grace period, I mean they give you a whole year to send someone a wedding gift, right? (They do, right? Otherwise I'm in kind of a lot of trouble...)

So let's just pretend that instead of a surprise party last night, we brought Ann breakfast in bed this morning! 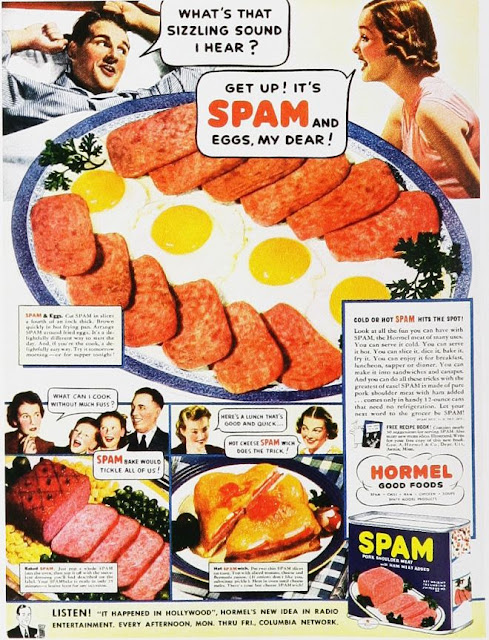 "What's that sizzling sound I hear?" the husband asks.  Any rational person would assume the answer is "Bacon!", and wonder why he even bothered to ask. But Hubby clearly knows his wife, and I suspect the question is posed more in a tone of dread than anticipation. The best possible reply he can hope for is, "A grease fire. RUN!"  But no, she says eight little words which, if they must be spoken, should never be shouted out with glee:  "Get up! It's SPAM and eggs, my dear!"

Sensibly, they choose not to show us Hubby's response (I can only imagine he rolled over with a muttered, "I thought I left a wake-up call for half past divorce," but by this point the odor of unfertilized poultry ova and fried swine jowls must be impregnating the knotty pine paneling, so he might as well get up and try to dull his olfactory sense by igniting the first of many Old Golds.

But enough of his problems! What about the known side effects of SPAM, such as homicide, and involuntary rhyming? Look at that woman in the middle left box. She asks a leading, but reasonable question, "How can I cook without much fuss?" To which her husband screams the atypical rejoinder, "SPAM bake would tickle all of us!" At first, you might just assume her husband was insane, and move on with your life. But if you have no life, you might do one of those "enlarge and enhance" things they do on TV procedurals, and reveal that the mouths of Hubby and the children are all frozen in mirthless grins, like Conrad Veidt in The Man Who Laughs. The son appears to be screaming in terror, but his dead eyes, gazing listlessly into the void, suggests that he accepted the inevitability of death a millisecond before the cleaver struck him down. Sister's eyes, popped wide and rolled to the side, suggest Mother was listening to Eddie Cantor on the radio as she taxidermied her daughter, while Father's fixed look of agonized servility is perfect for a corpse whose killer imagines him so eager to ingratiate himself that he seconds her menu-related musings in rhyme.  But a crappy rhyme, of course, because he's no better as a dead poet than he was as a husband and provider, which is why Mother keeps her cutlery collection buried in his back. Oh, a bit of sawdust trickles out when she withdraws the butcher knife, but at least the bastard is finally helping around the kitchen.

The ladies in the middle right box appear to be alive at least, but not only are they also speaking in rhyme, they're speaking in code as well. Lady #1 says, "Here's a lunch that's good and quick..." to which Lady #2 replies, "Hot cheese SPAMwich does the trick!" Which clearly it does not. But despite their effort to throw gossips off the trail by randomly inserting nonsense words like "cheese SPAMwich," it's obvious from the context, i.e., the words "lunch", "quick", and "trick", that one of these ladies had a nooner at the Mayflower Hotel with Roger Sterling.

Finally, we're left with the main message of the ad: "Look at all the fun you can have with SPAM, the Hormel meat of many uses." Just imagine if Joseph, instead of his storied coat of many colors, had sported outerwear fashioned from reprocessed pork remnants. While it probably wouldn't have hindered his ability to interpret Pharaoh's dreams, I bet he would have spent a lot more of his time getting treed by jackals.

Everybody full? Nobody wants seconds? Okay then, let's bring on dessert! 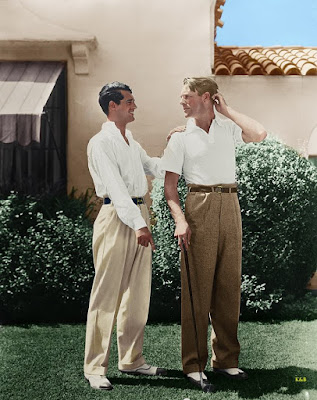 Today's birthday beefcake features Cary Grant and Randolph Scott (in living color!, posing outside the Spanish-style home they shared in Santa Monica), mostly because -- if memory serves -- the whole SBL tradition first came about as a consolation prize when Ann balked at Cary's chin divot.

And speaking of Sexy Birthday Lizards!...

...we have a lovely Tokay Gecko which appears to be tasting its own eyeball, because it's gotta be better than SPAM.

P.S.  As a resident of Hollywood, I'm naturally concerned about any threatened SPAM-related program activities going on around here, so I'm hoping Ivan will drop by and explain just what the hell Hormel's new idea in radio entertainment was, and how I can kill it.
Posted by Scott at 6:35 PM

I don't know, I love Spam! I've even been to, and forced my son (the younger one, in captivity at the time) to visit the Spam museum! Good times...
And happy birthday Ann!

I love Spam, too. My partner's a big fan of spam musubi. My pot-luck go-to is Spam Caesar Salad. One of my big party dishes is Sweet and Sour Spam and Tater Tot Stir Fry. And, we recently discovered, spam slices dredged in breadcrumbs and Tang powder and then pan fried is really, really good.

With that in mind, allow me to make dinner for the birthday girl! Happy birthday, Ann.

My eye was caught by the caption, "It happened in Hollywood".

And I thought they meant Spam, but it was radio entertainment.

That sizzling sound I hear is my brain fizzing from even thinking about Spam. Spam, spam, spam, baked beans, and Spam!

I can't wait to add a touch of elegance to Madame Marxist's salon -- with Spam canapés!

Hope it was happy, Ann, even if you don't like the dimpled look. (I'm not taking it personally.)

And thanks, Scott, now I have an urge for Velveeta & SPAM on very white bread. I'm going to have to lie down for a while 'til it goes away.

Just a guess, was "IHIH" the TMZ of its day?