Twitter may have its uses beyond inducing daily panic attacks, but I've yet to discover them. Today I signed on and found this diabolical Trolley Problem waiting for me: 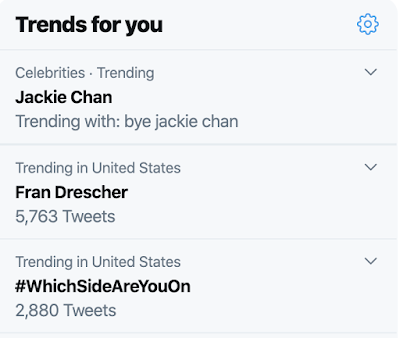 Is he sick? Did he die? This is terrible! I grew up on Jackie Chan! Idolized him! He's a filmmaking legend! An international treasure! Why? WHY??

Huh. You know, I've met Fran. Worked with her even, and she's...definitely one of God's creatures. I mean, if you believe all human life has intrinsic value, then you'd certainly have to concede that hers meets that basic standard. No man is an island, and all that.

Yeah. Well...It's not exactly Sophie's Choice, is it?

[NOTE: They're both fine as of press time. The Jackie Chan trend is just about some asshole New Yorker being racist to an Asian cop, while Fran has evidently turned into Emma Goldman and is raging against the machine ("Capitalism has become another word for Ruling Class Elite!"). Fight the Power, Nanny.]
Posted by Scott at 9:21 AM