Doctor Who IS Mike Nelson in SEA HUNT!

In a recent email exchange with our compatriot Engineer Vosburg, I mentioned that I'd done some diving off the Channel Islands, and Chris, always quick with the Hollywood trivia, whipped out a hyper-obscure hunk and tied it in nicely with Moondoggie's scarf-modeling headshot below.

Take it away, Chris:

If -- or when -- diving off Catalina, keep an eye out for this spherical artifact, an aluminum-sheeted “diving bell” prop left there in 1957 by Jerry Warren while shooting The Incredible Petrified World. I don’t think he ever said exactly where he left it, but he needed it on the bottom for shots of the cast “leaving” the bell in SCUBA gear (four of them—like the Tardis, it’s much roomier inside than you’d think), and told schlock movie historian Tom Weaver that he didn’t bother to haul it up when the film wrapped. Litterbug.


Since the Doctor’s Tardis got a mention in the comments at the most recent WOC pussycat post [spitting the p’s like Sylvester would], I thought I’d include a pic. 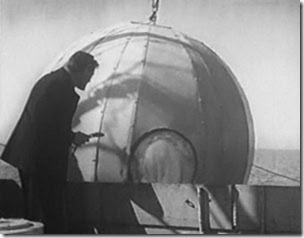 And the roomy interior: 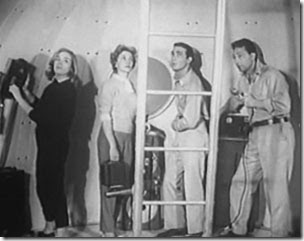 See? Plenty of space. And then to top it off, the crew, in SCUBA gear, exits through a hatch in the top of the bell (note ladder). While on the bottom of the ocean. At several hundred feet. Okay then.

And then it gets really goofy.
Posted by Scott at 1:53 PM

What I like about that shot of the intrepid crew members is their clothes. Things were more down-to-earth, or down-to-seabottom, in those days. You didn't have to gussy yourself up in some variety of fake-o catsuit with a blinking fake-o headset to pursue adventure in a 50s-vintage fake diving apparatus, the way the hapless starlets (or hapless animated popsys) do in this degenerate age. You could wear the same stuff you'd wear to the supermarket, grab your Geiger counter, and GO. You didn't even have to wear a padded bra.

And if you were a guy starlet, you'd just throw on the khaki twills you wore to audition for the Service-with-a-Smile Gas Station Attendant part, minus the visor cap.

Gonna be a while before anyone scubas down to find the bell...unless I get drunk enough.

Lemme ring up my buddy, Jason. He lives down round those parts, and has a bottle of tequila with my name on it.

O dear. Sorry to be the one to tell you this, Carl, but, just because the script says "several hundred feet", this doesn't mean the prop bell is.

In fact, the script is all over the map, depth-wise: The cable snaps at 1700 feet, the bell plummets to the bottom (with hilarious shot of the "depth gauge" bottoming out), John Carradine (pictured above) at one point describes "miles" of depth, and the inhabitants of the bell suddenly find themselves inexplicably "on a ledge" of significantly less depth than originally thought, resulting in the decision to leave the bell, and this ridiculous dialog:

Paul: “How could we move upward?”

So there. Not even Ed Wood was this lazy about tying up loose plot points, and it's at this point the crew suit up and discover the undersea caverns with lost civilizations which, as you know, honeycomb our world.

"She accepted the role in 1957's The Incredible Petrified World (1957) as a favor to its director, Jerry Warren, who was a former boyfriend. He persuaded Coates to do it by telling her that the film would not be shown in California. However, after it was completed, she found out that Warren did indeed release the film in California, and she was told by at least one studio executive at Columbia that the film was so inferior and shoddy that the studio would not be hiring her again. On top of that, Warren never paid her."

Li'l writes: What I like about that shot of the intrepid crew members is their clothes.

One of the fun parts about "Project Moonbase" (1952) is the clear influence screenwriter Robert Heinlein had on the dress code. Elsewhere, jumpsuits were de riguer, but a hard-headed hard-science guy like Heinlein had already arrived at the conclusion that there really wasn't any point in this, so he dressed his astronauts in t-shirts, shorts and skullcaps.

As Joel of MST3K observed, it made them look like camp counselors.

So I can have even more tequila before I dive down to the "bell"?

As a last add on the fate of the bell prop, I contacted noted Island steward and dive bum Dr William Bushing who has probably put in more hours underwater in Catalina than any man alive, and received this disheartening reply:

"Given the year of the film's release (1957) and Catalina's steep offshore slope (at least on the leeward side) I would imagine it settled well below safe diving depths long ago.

My maximum depth over my time here has been 200 ft (many times) due to the possibility of oxygen toxicity at greater depths."

Pretty much all of Jerry Warren's film career can be summed up in the phrase, "he didn’t bother".

Or maybe it's tequila neutralizes Oxytocin. Either way, get out my way, I'm going down! WOOOOOOOOOOOOO!

Lance writes: Pretty much all of Jerry Warren's film career can be summed up in the phrase, "he didn’t bother".

We make a lot of fun of Jerry Warren and Ed Wood and similar B-movie schlock mavens for their inattention to detail and verisimilitude, but there's one A-movie offender especially, who, owing to his stature, I don't wanna actually name straight out, so I'll just say that his initials are:

Editors, screenwriters, actors, and studio heads alike were constantly scratching their heads and pestering him with "wait, what? Why would the character do that?" or "But that doesn't make any sense!" or "people don't act that way!" or "sorry, did I hear that right? A biplane as a murder weapon? Over cornfields? Why is the character there again?" and his reply would always be:

So RIP Jerry Warren [laughing], you're in good company.