When I first read this comment, it got me to thinking about the 1975-76 Ellery Queen TV series.  If you remember this show (and if so, you should probably be taking Lipitor and making sure your Roth IRA is fully funded), star Jim Hutton would break the fourth wall at the end of each episode (a device that paralleled the "Challenge to the Reader" that appeared in the penultimate chapter of the early Queen novels) and say, "You've seen all the clues, you have all the information.  Do you know who the killer is?"  And I imagine a certain percentage of the audience -- the same people who now weave elaborate eschatologies about flying demons colliding with 747s so they have more airspace to wrestle with Jesus, and deposit them in forgotten threads on obscure  blogs -- responded to the TV by shrieking, "the Illuminati!" or "Fluroide!", when it fact the culprit was merely that week's guest star Ray Walston, Joan Collins, or obvious sociopath Ken Berry.

This in turn put me in mind of a Woody Allen essay that first appeared in Playboy back in the early 70s, called "Match Wits with Inspector Ford"...


The Case of the Murdered Socialite

Inspector Ford burst into the study.  On the floor was the body of Clifford Wheel, who apparently had been struck from behind with a croquet mallet.  The position of the body indicated that the victim had been surprised in the act of singing "Sorrento" to his goldfish.  Evidence showed there had been a terrific struggle that had twice been interrupted by phone calls, one a wrong number and one asking if the victim was interested in dance lessons.

Before Wheel had died, he had dipped his finger into the inkwell and scrawled out a message:  "Fall Sale Prices Drastically Reduced--Everything Must Go!"

"A businessman to the end," must Ives, his manservant, whose elevator shoes, curiously enough, made him two inches shorter.

Inspector Ford goes on to solve a series of absurd crimes by making abrupt, senseless deductions bearing no relation to the evidence, which doesn't exist anyway -- so it all makes perfect sense.  Now Tucker Carlson -- the Greg Marmalard of New Media -- has hired his own consulting detective, Jamie Weinstein, who, in his brief time at Tucker's Weakly Reader (as TBogg calls it), writing their daily blast spam, the "DCMorning," has already done the impossible:  he's made Jim Treacher seem funny.

Not that Jamie's comic bona fides aren't impressive.  In addition to spicing up the Daily Caller's quotidian plea for attention, he's also "the winner of the 2011 'Funniest Celebrity in Washington' contest."  And that's a city which has witnessed the comic stylings of Dick Nixon, who hilariously invited the country to "Sock it to me?" while Obama, supposedly the hip and cool dude, won't even deign to note that da judge is approaching.

But today, Jamie isn't concerned with making us laugh.  No, today he's all about the serious business of Connecting the Dots and Laying the Pipe.  But since this is a classic "Fair Play" mystery, we will have all the same clues Jamie does, so let's see if we can't solve the case first.  Are you ready to...Match Wits with Inspector Weinstein? 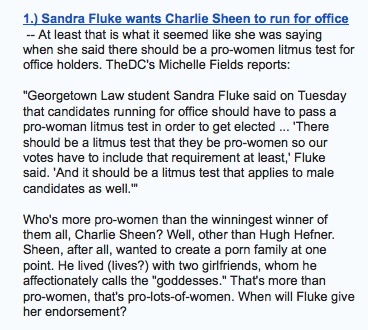 So, Junior Detectives, how did Inspector Weinstein deduce from the evidence above that Sandra Fluke not only supports Charlie Sheen for public office, but has ever even heard of him.  Wait!  Before you answer, let's look at the actual article Inspector Jamie's email is flogging:

Georgetown Law student Sandra Fluke said on Tuesday that candidates running for office should have to pass a pro-woman litmus test in order to get elected.

Fluke, an advocate for the Obama administration’s plan to force health insurers to cover birth control, was on Capitol Hill for a forum on “Opportunities and Challenges for a New Generation of Women,” in celebration of Women’s History Month.

She also spoke about the possibility of running for office in the future:

“Numerous American women have actually written to me in the last few weeks saying that I should run for office, and maybe someday I will."

So that's it.  You have all the clues...
Now if you've been watching -- closely! -- you have all the information you need.  And you should be able to deduce that the victim -- Facts -- was actually killed by the detective (just like in The Mousetrap)!  Or perhaps it's just a lazy, farfetched bit of hackery by a misogynist, entitled asshole.  As another famous literary sleuth observed, "Once you eliminate the impossible, whatever remains, no matter how improbable, must be the truth."
So, I'm going with the Asshole theory.
Posted by Scott at 11:54 PM

Ms. Fluke is quite impressive, but I don't know what a pro-woman litmus test is. Is it some kind of Norquist-esque pledge you have to sign? Or do you use real litmus strips to find out what your pH balance is? (No fairs using vinegar to throw the results off.)

Hopefully she'll learn a valuable lesson from this bit of fol-de-rol: that if you don't clearly define your terms at the outset, some Asshole will come along and define them for you.

"Once you eliminate the impossible, whatever remains, no matter how improbable, must be the truth."

The most unrealistic aspect of my ghostwriter Conan Doyle's stories, I thought, is that I'm usually supposed to be all admiration for this clearly illogical supposition. What about the shit you didn't think of, Sherlock, does that count?

It's like when he invents something that I didn't see and makes a big deal out of it. All it does is make me look a fool, and instead Doyle writes it like I'm fucking awestruck at his perceptive skills.

Gonna have to have a little talk with Mr. Arthur Conan Doyle, that's what. Find himself in Queer Street soon enough, he will.

"Sorry, Holmes, old boot, what was that you were saying?"

I have Col. Mustard in the kitchen with the bread knife.

In fairness, Treach lost a bit off his fastball when he took that SUV to the head.

Proving, once again, there's no truth that bad editing and the judicious use of quotes out of context won't destroy!

And I'm still not a robot, in case you're interested.

Debbi, I'm always interested in your ongoing struggle to resist being assimilated by the Borg Collective.

SSSsshhhhh! What, are you trying to make Ivan angry?

As for this case, everyone forgets one important fact: Vaginas are involved. All manner of unexpected reactions will result when one mixes conservatives and vaginas. That said, this is undoubtedly the most baffling of mysteries. I can't wait to go to the blog's last page and turn it upside down so I can read the solution!