Happy Fathers Day...Or IS It? 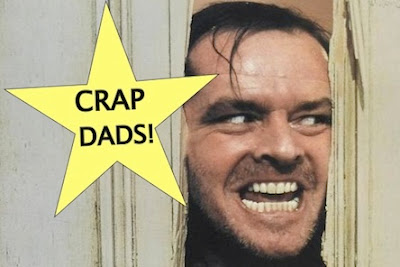 Jack Torrence from The Shining (1980), the Gold Standard for sucky celluloid sperm donors.

Once again, it's Father's Day, and, as I did last year, I've got a batch of Terrible Dads who, one hopes, makes you more grateful for you own (if they don't then, damn, I'm sorry!)

Last year, there was some question in the comments thread over whether or not step-fathers should count. I think they do -- after all, saying they don't would be an insult to the good step-dads (and step-moms) who prove it takes more than a sperm (or egg) to make a parent. (cue that song about stepfathers that always makes me cry:) 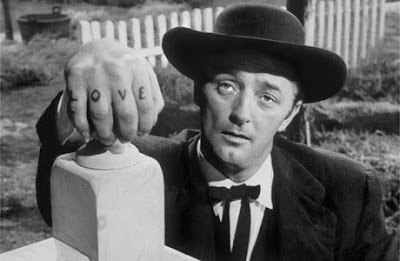 Harry Powell (Robert Mitchum) in Night of the Hunter (1955) A sexual psychopath who marries widowed mothers and then turns their children into orphans -- so many times, he's apparently lost track. His latest victim is Willa (Shelly Winters). It could be argued that her late husband wasn't such a great dad either -- after all, if he hadn't hidden stolen money in his 4 year old daughter's doll and sworn her and his older son to secrecy, the mess they're in could have been avoided.

Vito Corleone (Marlon Brando) and Michael Corleone (Al Pacino) in the Godfather films. For obvious reasons. Also, Carlo Rizzi (Gianni Russo), as suggested by AnnPW and by my mom. Carlo didn't immediately register with me as a dad, just as a rotten husband. But he did get Connie pregnant, although, as AnnPW noted, "he was, um, prevented from contributing more than a Y chromosome."

Robert Thorn (Gregory Peck) in The Omen (1976). Parents deal with the loss of a child in many different ways. Still, accepting a substitute baby for the one who died, without telling anybody, including your wife, might have negative consequences down the line. Especially if the adopted boy is the Antichrist. And you're slow to pick up on that little detail. Until the demonic nanny pushes your wife out a window.

Darth Vader (James Earl Jones), the first three Star Wars films. Faced off his own offspring in battle, lopped off his son's hand, then took that moment to bitch out the kid for never sending him a Fathers Day card or a Pick-Me-Up Bouquet. Wasn't any better to his daughter, whom he held captive as a political prisoner, tortured with a levitating Hoppity-Hop, and later sold as a sex slave to a repulsive monster. (If a woman tells you her dad treated her like a Princess, find out which Princess she means.  If it's Elinor Donahue from Father Knows Best, it's probably safe to book a second date.)

Dwight Hanson (Robert DeNiro) in This Boy's Life. (1993) I wouldn't want him as my dad in this or any other life (suggested by Scott).

Joe St. George (David Strathairn) in Dolores Claiborne (1995). So evil, Dolores (Kathy Bates) is my hero. Except I don't think she let him suffer enough.

Mr. Childers (Robert Duvall) in Sling Blade (1996). Kept his mentally challenged son in a shed, and later handed the boy his prematurely born baby brother to "take care of"(i.e., kill). Can we get a ruling on whether Doyle Hargreaves (Dwight Yoakam) also belongs on the list? Though he might be one of the most loathsome movie villains of the '90's, he never actually marries Frank's mom, and though he's planning to move in, doesn't quite get around to it.

(Scott:  I'd say he was a promising candidate, who was saved from infamy by procrastination.  Which, now that I think of it, probably foils more potential supervillains than James Bond and the Justice League of America combined.)

Glen Whitehouse (James Coburn) in Affliction (1998). His proudest moment as a dad was seeing his son turn into the same abusive asshole who drives people away that he was.

Billy's dad* in An Angel Named Billy (2007). I think we can also include Mark (Robert Lewis Warren), who wasn't creepy and disturbing at all, at least not to the director.
*The character wasn't identified by name in the movie, but looking at the entry in the Internet Movie Database, by process of elimination, I think he's the character identified in the credits as "Steve Houston", in which case he's played by Edgar Allan Poe, Jr., who's done as much for his family's name as Billy Carter did for his.

Al Bundy (Ed O'Neil) on Married...With Children. The exact opposite of Ed's character on Modern Family (see below) in every possible way. 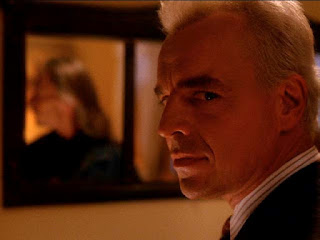 Leland Palmer (Ray Wise) on Twin Peaks (suggested by Chris Vosburg). I wasn't a viewer of this show, but my vague understanding of it (is there another kind?) suggests to me Chris is right.

Jack Malloy (Geoff Pierson) on Unhappily Ever After. I was hesitant to include this character, because frankly, this show sucked, with a perfect suckiness, more than a sitcom had a right to suck. And the suckiest thing in this suckfest was the dad. Whether he was having imaginary conversations with a stuffed rabbit, going off on a misogynist tirade, or leering at his daughter in a way that suggested something other than paternal affection, Jack always left viewers wanting a shower after every episode.

Robert Layton (Rob Lowe) in the made for TV movie The Christmas Shoes. What a tool.

Javier Delgado (Benjamin Bratt) on Modern Family . We'll let his ex-wife Gloria (Sophia Vergara) explain: "When Manny was six, Javier took him to the petting zoo. I learned later that Petting Zoo was a strip club. A real petting zoo would have been cleaner." (Fortunately, Manny's stepfather, played by Ed O'Neil, is a great dad.)

Dexter Morgan (Michael C. Hall) on Dexter and Frank Gallagher (William H. Macy) on Shameless. (both suggested by my mom).

Alas, I don't have premium cable and have not caught up to these on DVD. But, as my mom observed, Frank "never does anything for his family," and, now that Dexter's a dad, he might want to take a different career path.

And, finally, as a special musical treat, I give you:

There's Liza Dolittle's father, who sold her to Henry Higgens for five pounds (declined 10 pounds, because he'd be tempted to save it), and urged Higgens to "beat her" as he (Dolittle) left to go on a drinking spree.

I don't know about Alfred (or "H'Alfred" as he himself pronounced it in the Cockney of Shaw's period) Doolittle... there was nothing meant to be seen as unusual in his detached, opportunistic casual-user relationship with Eliza, considering the time, place, and their poverty and social class, although Shaw certainly presented him as unusual in other ways. Anyway, Eliza knew how to stand up to him.

I nominate Mr. Barrett in "Barretts of Wimpole Street", as spine-crawlingly portrayed by Charles Laughton. And if step-dads count, how about Basil Rathbone as Mr. Murdstone in "David Copperfield"? The actor, who was reportedly a very nice person, found the scene where he has to beat little David (Freddie Bartholomew) so upsetting he could barely bring himself to perform it.

For beastly dads, it's hard to match those stern, self-righteous Victorian types.

Guess I should read the actual post before I extrude a comment, huh? Stepdads are definitely in, then.

Also, I think I must have suggested Mr. Barrett last year. A whole year, jeeze. He's still awful, though.

Bill S writes off Jack Malloy (Geoff Pierson) on Unhappily Ever After. I was hesitant to include this character, because frankly, this show sucked.

I assure you, the show's primary demographic was young heterosexual males, who only watched the show to get a load of whatever hooker getup Nikki Cox was being shoehorned and push-up bra'ed into in that week's show.

Cocaine still flowed freely on the Warners lot in the mid nineties, and I can't help but think that this may have influenced costuming decisions for Nikki.

Which of course I thoroughly enjoyed, although I have no recollection of what the hell the stupid show was about.

L'il Innocent, if I compile a list next year-and likely I will-I'll be sure to include your suggestions. (I hope "The Barretts of Wimpole Street" becomes available on dvd, as I've never seen it.)
And I think Alfred Doolittle most certainly qualifies. I think I WAS going to include him but it slipped my mind, as did Tracy's dad in "The Philadelphia Story".

Hey, just thought of this one:

Small-time career criminal reunites with his son Brad Jr. (Sean Penn) and introduces the susceptible lad to the romantic and lucrative life of small time crime.

A murder is committed in the course of this by Dad, and Jr sours on the life, but at this point it's too late: he knows too much and Dad needs to pick up the loose ends, and so attempts to murder his own son.

Awesome scene in the Whitewood kitchen as Jr confronts Sr after having crawled away, with several bullets in him, from the attempted shooting.

If you ever see this movie, by the way, be aware that the reaction of Walken to the gunshots fired in the kitchen scene by Sean Penn are ad-libbed and pure Walken: he's absolutely terrified of firearms and the shaking and cowering are more Walken than Whitewood.

AND one of my favorite Madonna songs, "Live To Tell", on the soundtrack (though that probably matters more to me than to you.)

You know, I was gonna mention that, Bill, but I figured I'd gone on enough. The song, and especially that descending three-note passage rendered on a synth keyboard, forms the basis of Patrick Leonard's score for the film, which I quite liked.

I'm sort of upset with you that, since you mentioned Duvall anyway, you don't mention Tender Mercies, arguably the single worst dad in movie history.

Worse than the dad he played in "The Great Santini"? Hmm...it DOES occur to me that Bull Meechum would probably have at least been upset if one of his kids died. Mac doesn't even seem to register what happened at all. No wonder his ex dumped him.

you should co-credit David Prowse since he's the one who had to wear the outfit, kill Obi-Wan, chop off Luke's hand etc ;}

Wow - thanks for the HT Bill! Li'l Innocent has reminded me of another one that fits in her category of "stern, self-righteous Victorian types": Dr. Austin Sloper (Thanks IMDB!) as played by Ralph Richardson in The Heiress. Total asshat.

I put Austin Sloper on the list last year, AnnPW.

Crap, I forgot to include the link to last year's edition -- basic editorial fail -- sorry about that. Fixed now.

Bill, sweetie, we share more than a birthday. Live to Tell is my favorite Madonna song as well. Although, for romantic reasons, I also adore "Crazy for You" from the movie "Vision Quest" (I think, not sure & too damn lazy to check before posting tonight.

Bill, you're right. I meant Great Santini. I've had Duvall switched in those movies so many times in my life, I ought to direct a mash-up!

Sigh. I need to pay attention! And thanks, Scott, for fixing the link. I actually had written my comment and THEN tried to go back and read last year's post, so I was aware that I had nominated a previous contender. Though, in my defense, SOME dads deserve double booking, no?

Technically, three. Hayden Christensen was Vader when the twins were born. He killed their mom.

Come to think of it, technically four, except that Seb Shaw doesn't appear until Vader has redeemed himself a little by killing Palpatine.