The Falcon and the Snowman, the Phenix and the Anix

Well, I suppose that depends which hand you control the mouse with, and what you're doing with your other hand while you surf.

Amazon bottoms disagree, however, because despite what the Amazon tops seem to think, the bottoms' index is actually exit only.  Plus, ForeSee condoms are a poor substitute for Forex, especially when you've got a latex allergy.


Dec 27 (Reuters) - Amazon.com Inc remained the best website for shopping online while JC Penney Co Inc suffered the largest drop in customer satisfaction of any major online retailer this holiday season, according to a survey released on Thursday.

Flash sale sites Gilt.com and RueLaLa.com were among the worst performers in online shopping satisfaction this season, according to ForeSee's Holiday E-Retail Satisfaction Index.

So while in 2011, we saw a surge in consumers hiring drag queens to flash them, this year people seem to prefer buying the Kindle version of 50 Shades of Gray's Anatomy, or whatever the hell that thing is called.


"The importance of satisfying them and giving a great consumer experience is going to pay back huge dividends in terms of profitability for these retailers," said Larry Freed, president and chief executive officer of ForeSee, which measures customer satisfaction for companies, including retailers.

ForeSee employs a base-10 logarithmic scale, much like the Richter scale, to measure satisfaction ranging from Fake Moaning Just To Get It Over With In Time For Conan, to Pillow-Biting, to Back Scratching That Leaves Fingernail Polish In The Wound And Requires The Immediate Application Of Neosporin.

I assume that everyone has experienced a happy holiday. I'm also assuming that everyone is also experiencing the post-holiday doldrums, particularly here in the Northeast where the sun shone briefly for ten entire minutes this afternoon and for the first time in at least a dozen days.

Not depressed, really, just looking for some "self-help" advice to get me through the New Year. And off to America's most satisfying shopping website for a truly satisfying web shopping experience. 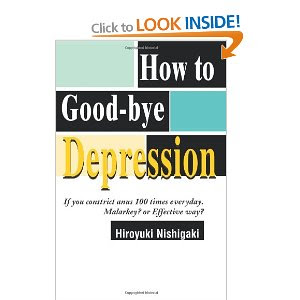 Just in case that subtitle is a little unclear, it reads: If you constrict anus 100 times everyday. Malarkey? or Effective way?

Here's the book description, via, presumably, the author himself:  "I think constricting anus 100 times and denting navel 100 times in succession everyday is effective to good-bye depression and take back youth. You can do so at a boring meeting or in a subway. I have known 70-year-old man who has practiced it for 20 years. As a result, he has good complexion and has grown 20 years younger. His eyes sparkle. He is full of vigor, happiness and joy. He has neither complained nor born a grudge under any circumstance. Furthermore, he can make #### three times in succession without drawing out.In addition, he also can have burned a strong beautiful fire within his abdomen. It can burn out the dirty stickiness of his body, release his immaterial fiber or third attention which has been confined to his stickiness. Then, he can shoot out his immaterial fiber or third attention to an object, concentrate on it and attain happy lucky feeling through the success of concentration.If you don't know concentration which gives you peculiar pleasure, your life looks like a hell."

How to Good-bye Depression has certainly changed my mood, although not sure if exactly for the better. For instance, I've been performing the simple exercises the author has suggested but now have an upset tummy and, this evening, had to sit on a pillow in order to watch the PBS Newshour.

Before I begin with today's set of contractions, let us conduct research to identify our author.

Amazon is of no help here. They offer only a brief biographical snippet:


Hiroyuki Nishigaki, a graduate of Osaka City University in 1963, resides in Japan. He was employed by the Kyodo News Agency until 1976. He is the author of four books in Japanese, including How to Attain Silent Knowledge, and the author of one book in English Rejuvenation and Unveiled Hidden Phenix.

I suppose, Mr. Nishigaki, you have acquired a non-farting attitude and thus have achieved Silent Knowledge. But your method for depression has turned this correspondent into a virtual methane factory that can't be stopped, not even by the EPA.

Now we're really interested. What exactly is the "Unveiled Hidden Phenix?" What exactly is a "Phenix" in the realm of the possible or imagined? Help please, Wikipedia. (And no, I don't have any damn money for you right now so stop asking.)


Carlos Castaneda accomplished the feat to introduce the ancient Inca-Shamanism (how to beckon the spirit, how to bring up supernatural power or our immaterial fibers or third attention—called a phenix in Egypt—within our bodies, how to become healthy-happy-efficient, and how to fuse with the universe without losing consciousness and live there for 2 billion years) through his 12 best selling books. He sent another new bible to the world.

As I discuss in Rejuvenation and Unveiled Hidden Phenix, I think the following points are essential for us to attain the goal of Inca-Shamanism. They are: stopping your breath automatically, sleeping without losing consciousness, circulating your energy in your physical body, cleaning up your central energy pipe, making the beautiful, strong, energetic core of abdomen flexible and firm, good spine, the secret of physiognomy, good complexion, rejuvenation, fasting, influence of other people and of devils, cutting the pipe of floating devil above your head, good relationship with opposite sex, dependable self-importance, good repentance, imagining powerful men such as Christ and absorbing the power of various voices and of various flights. So, I have added them.

All well and good, but Mr. Nishigaki's bio, while substantially similar to his Amazon C.V., adds an element which I find highly significant:  "A female inorganic ally gave the author the ability of space travel at age of 10 and 56. His first space travel was at the age of 56."

I'm not entirely sure what a space-traveling female inorganic ally is, but I assume that for a brief time Mr. Nishigaki dated a blow-up doll from Starfleet.  Here's the part that really struck me, though:  He was given the ability of space travel at age 10 and did nothing with it!  And we complain that kids today are lazy.  Of course, it was handed to him by an icky old girl, so possibly he was afraid of contracting Space Cooties, but still...  It had to be embarrassing when she showed up again 46 years later, coughed discreetly and said, "Oh, hey, I just happened to find this ability of space travel.  It fell behind that stack of magazines..." (like most red-blooded males, the young Hiroyuki probably spent his adolescence collecting issues of Sphincter! The Nation's Leading Journal of Anal Bodybuilding and stashed them in the attic).

Regardless -- now we are getting somewhere. The Phenix and the Anix are connected through Carlos Castaneda. The missing ingredient was psilocybin. Of course I'm sitting on a pillow. How could I have mistaken the author's intent?

All enjoy yourself a new years happy time. Thanks you for your reading, and likewise your comments most gracious in the production of crap.

ForeSee? Is that like foreplay for guys going to those curtained booths on the boulevard?

You know what's really depressing? This book is at #39,096 on Amazon's best-seller list (#56 in Books > Health, Fitness & Dieting > Aging > Depression). And meanwhile, the perfectly decent (I swear) book I ghostwrote a number of years ago is at something like 8,000,000.

PS: Your ideas are intriguing to me and I wish to subscribe to your newsletter.

Also, I feel I should point out that, according to Amazon, this is frequently bought with: "Cookin' with Coolio: 5 Star Meals at a 1 Star Price" by Coolio.

It is also often bought with "How to Live With a Huge Penis" and the first season of "The Mentalist."

Make of that what you will.

Eternal Youth thru regular bowels! Sounds good to me!

I shall write a book The Power of Burping! and make millions, millions I tell you! Yes, you laugh, but look at Jonah Goldberg!

All enjoy yourself a new years happy time. Thanks you for your reading, and likewise your comments most gracious in the production of crap.

We who are about to crap, salute you!
~

That is the sekrit of Jonah.
~