Remembrance of Posts Past: The Unintelligible Edition

Since I should have this long festering project complete by the weekend, regular blogging (such as it is around here) will resume next Monday.  In the meantime, I figured we could pass the time by  revisiting posts from those halcyon days when it was possible to click on the bookmark for World O' Crap each morning, secure in the knowledge that you wouldn't have to read anything I wrote.

So here's another entry from The S.Z. Files, originally posted September 25, 2003.

National Security Advisor Condoleezza was on Bill O'Reilly's show tonight, advising him on the steps the nation is taking to keep him safe from vicious NY Times terrorists.

No, actually, the White House remembered that Bill had said, "If the Americans go in and overthrow Saddam Hussein and it's clear he had nothing [WMDs-wise], I will apologize to the nation, and I will not trust the Bush administration again."  And just like Santa Claus going to Macey's to restore little Natalie Wood's faith in miracles, or Clarance coming down from heaven to renew Jimmy Stewart's faith in the FDIC, they sent Condi to restore Bill's faith in the Bush administration. 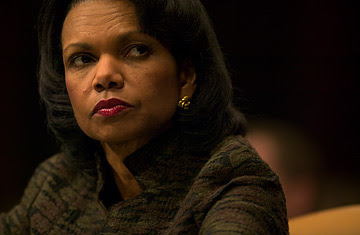 While I didn't see the show (my house is a "Yes-Spine Zone"), I did read the Fox News online transcripts (Condi Saves Christmas).  Sadly, it appears that the transcriber for the show has been arrested for espionage and the janitor is filling in, since we got a lot of this kind of thing:

Um, I theorize that O'Reilly and Condi were cussing up a storm, and in deference to her position, Fox is pretending they couldn't make out that part of the conversation.  But why the need to indicate that the optimimism is just phonetic?

Anyway, despite all the garbles, the transcript does give us the White House Yes-Spin on lots of stuff.  For example, that while we haven't actually found any WMDs in Iraq, Bill does not have to apologize to the nation and can continue to trust the Bush administration because:

RICE: We went to war -- the president has led (ph) the people to war because this is a dangerous tyrant who had used weapons of mass destruction before.

So, Saddam USED to have weapons that posed a threat to us, so we sent our troops in now, to prevent him from destroying our past.  Something like that.

But unstoppable truth-teller O'Reilly was unsatisfied:

O'REILLY:  All right.  But on March 30, 2003, Donald Rumsfeld, secretary of defense, said this, he said, "We know where the WMDs are.  They're in the area around Tikrit and Baghdad."  That turned out to be a mistake.
RICE:  Well, they're still searching.  The areas around Tikrit and Baghdad happens to be one of the most difficult areas, of course.  It's in the Sunni triangle

So, the WMDs are really there, but in the Sunni Triangle, which, like the Bermuda Triangle, sometimes lets things slip into another dimension.  But we'll find them, all right!  We have Leonard Nimoy on the case!

Okay, the subject of WMDs dealt with, and Saddam and Osama located (Saddam has slipped through the Sunni Triangle, and Osama is in "Afghanistan, Pakistan, someplace in that area"), we can move on to more important topics, like invading France.

O'REILLY:  Why don't you send a couple of American divisions over to get Jacques Chirac?  Can we do that?  And...
RICE:  We're always going to have our differences with the French.

[snip]
O'REILLY:  Jacques Chirac and France have hurt this country and put our servicemen in jeopardy.  Am I wrong?
RICE:  Well, I think that the French position is not one that we would have taken.  We think that...
O'REILLY:  But they put our service people in jeopardy.
RICE:  And we think, Bill -- and I think this is what Americans are reacting to -- after all that was done to liberate France in World War II -- that we could have expected better cooperation.  But that's behind us now.
O'REILLY:  (UNINTELLIGIBLE) American servicemen.
RICE:  No, I don't...

Since Condi undoubtedly had Secret Service protection during this visit to the Fox News Planet, Bill couldn't cut off her oxygen for refusing to agree with him that France endangered our servicemen by sneering at them.  But I bet he called her a bitch behind her back.

So, let's move on to the next threat to our National Security: Kennedys!

O'REILLY:  All right.  How about a couple of divisions to get Ted Kennedy up in Hyannis (ph)?  Can we do that?  American divisions?
[snip]  Look, I'm not a partisan guy.  I mean I'd vote (ph) for anybody.  But I think Kennedy is saying that President Bush -- and you work with him very closely -- contrived the war in Texas for political gain.

And anybody saying something like that is putting our service men in danger, and that's treason!  Am I wrong?  AM I WRONG?  But Condi just called it "a very unfortunate comment," and took Ted to task for bad manners in war time.

RICE:  I would just ask everybody to be civil.  Everybody should be pulling together now to deal with the situation that we have in Iraq.  This is a historic and important moment for American security, and certainly we can get past our differences and support the policy.

See, this is the President's Big Day, and so we should just support his policy, even if we think that it's killing American servicemen for no good reason.  But after this is all over and the policy either suceeded or failed miserably, THAT will be the time to talk about it.

O'REILLY:  All right.  You know there are some people actually rooting against the Bush administration for political purposes.  They want to see chaos in Iraq.  They want you to fail so that the president won't be reelected and somebody else will.  What do you think?  Is that un-American to carry that point of view?
RICE: Bill, I think we can have debates about anything.  About policy, about how we've handled it, how it's going to turn out.  I think that's perfectly American, and it's a good thing to do.  Let's just keep it civil and let's keep it at the level of debate...
O'REILLY:  All right.  (UNINTELLIGIBLE), right?  Maybe I would.  No, I wouldn't.

"All right.  Be civil to people who have opposing viewpoints and not accuse them of treason.  Novel idea.  Hmm, that's something I could start doing right here, to make the world a better place!  Maybe I would.  No, I wouldn't". 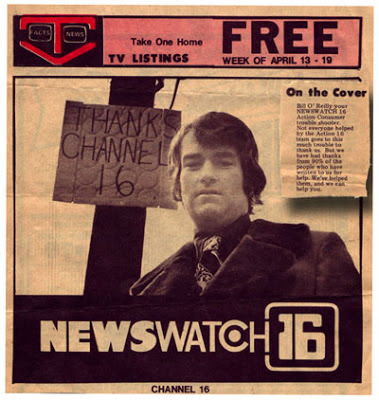 Then our dynamic duo talks about Iran for a while, and Bill is bitterly disappointed to hear that the administration is going to use cooperation, diplomacy, and the UN to deal with them, instead of A-bombs.

O'REILLY:  But don't you understand -- I mean, I'm sure you do, and I know you have to be diplomatic -- there's not this sense of urgency on the part of many countries in the world to help the United States.  We're at risk here.  We're target number one.  In Belgium, they don't care.

They just don't care, the bastards!  Our President is calling on them to send us troops and money, and then they get all pissy when we tell them if they don't do things our way, we're taking their ball and going home.  Here we are, fighting a war that they didn't agree to, but will they bail us out?  NOOO!  And now we're in remote personal danger in our own country, just like people who aren't priviledged to be Americans, and they couldn't give a damn!  I say we nuke the Belgians too.

But wait, a hero approaches to unite the world in dealing with Iran, Texas-style!  It's George Bush, international sex symbol.

RICE:  Can I tell you something, Bill?  This president, because he's strong and steadfast and speaks the truth, is making more progress on getting international pressure on Iran than was made in the last...(CROSSTALK)
O'REILLY:  I read "The New York Times" today.  And "The New York Times" said that President Bush is a total buffoon and nobody likes him and he's not making any progress.

And Billy said that Sally said that The NY Times said that George Bush is icky and smelly and that nobody wants him on their kickball team 'cause he's got cooties. So we should invade them too, don't you agree?  Well, DON'T YOU?!?

But she doesn't, and neither will she agree with Bill that we should have deadly electric fences around our borders to keep out terroristic Mexican migrant workers and Canadian news anchors.  She says the Prez has a better plan, which apparently involves a "Mission Impossible"-style plot to make Mexicans think that they're already in the U.S. through the strategic use of false Walmart storefronts and California recall rhetoric.  Bill indicated that he can't get down with that, nor with her Bart-killing policy, but he does like her Selma-killing policy.

RICE:  OK.  Well, one out of three isn't bad.
O'REILLY:  No.  Listen, the mail is going to say, although you're an idiot, we love Dr. Rice.  I know what the mail is going to say.  Last question for you.  President has dropped 21 points in the favorability polls since last spring -- 21 points.  Why?
RICE:  The president?
O'REILLY:  Yes.
RICE:  Because this president is dealing with America's problems.  And he's a president who is in touch with Americans.

LOL.  Yes, and I love his plan to inspire the nation to lose confidence in him by keeping in touch with the citizens.  If his advisors are smart, they'll keep him incommunicado before his approval ratings drop any lower.

O'REILLY:  But why would he fall 21 percent?
RICE:  The president -- first of all, I think one has to look at polls.  And he was at astronomically high levels.  But see, when you go out there and you talk to Americans, they trust this president.  They know that this president is doing everything that he can on the war on terror.

And that's why he's dropping in the polls--we know he's doing everything he can, and we see what a mess he's making of things.  And then we think, "Well, if this is the best he can do, maybe it's time we let Gary Coleman have a shot at the job."

RICE:  They know that the economy is starting to recover.  They trust this president.

Um, no and no.  Sorry Condi, but thanks for playing Spin Zone with us.  You get a case of Rice-a-Roni, plus a copy of Bill's new book, Who's Picking Out a Thermos For You?
Now, let's review what we've learned:

First, our nation's enemies, in descending order of how much we hate them, are:

Second, the WMDs and Saddam have fallen through the Sunni Triangle, and so will either reapear in the middle of a WWII sea battle, or will get eaten by a giant turtle.

And third, the President is strong and steadfast and tells the truth, and so the nations of the world want to do our bidding.  But he is in touch with the American people, and so his approval ratings are going down.
Hope this helped.
Posted by Scott at 10:16 PM

Now Iran is number one, and it's all Obama's fault.

According to Jennifer Rubin.
~

Um, you left out (unintelligible).

Ahh, that was some good shit. I needed that. I spent the explaining to an old friend that this ->

was just some Prog kid trolling him. He insisted it was Holy Writ (MULTIPLE SOURCES, people!) and I came away feeling like I'd spent an hour slamming my dong in a car door.
All better now, thanks Scott!

Probably the best thing I ever heard O'Reilly say.