Housekeeping note:  Our friend Thers is having a pledge drive over at Whiskey Fire (details here).  If you have a few plinking nickels rattling around that coffee can, please consider making a contribution to keep our national conversation on the great social and political issues of the day well supplied with the word "fuck."  Thank you.

"Ketchup is a Vegetable!"

Matt Drudge has apparently obtained a copy of the script of the upcoming miniseries "The Reagans", and provides more examples of how the bio-flick fails to properly reverence its subjects (Drudge on THE REAGANS) :

[The showcase line "Ketchup is a vegetable! It is not a meat, right? So IT IS a vegetable" is likely to become the "No wire hangers ever!" camp highlight of the season.]

Well, I wasn't going to watch this show, but if it's got Nancy chanelling Mommie Dearest and advocating ketchup, then I am so there!

One camp scene shows Nancy and Ron both standing nude [wrapped in towels] when they first learn from NBC's John Chancellor they have won the election.

Ewww!  Maybe I'm not there after all. 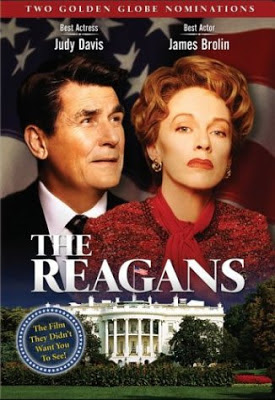 Per Drudge, the movie also shows Nancy popping pills, and slapping a young Patti.  Matt claims that Nancy "has reached out to Hollywood heavyweights, including Merv Griffin, to somehow stop" the upcoming movie.

But Drudge's real outrage over the whole business seems to be that Mr. Barbra Sterisand, James Brolin, is playing Ron, and so has a conflict of interest -- not because Barbra is a known an ultra liberal, but because . . .well, here's Matt:

An immediate member of the Brolin/Streisand family is currently suffering from HIV, according to press reports.
During a scene in the film which his wife pleads with him to help people battling AIDS, Reagan says resolutely, "They that live in sin shall die in sin" and refuses to discuss the issue further.
Actor Brolin delivers the uncorroborated words with extra confidence.

And you know Brolin's just doing that as political payback -- he should say the words with REGULAR confidence, to prove that he's not using his acting as some kind of political vendetta against Reagan for not taking any action against AIDs.  In fact, no actor with a family member suffering from HIV, or anybody who even KNOWS somebody who has (or had) HIV, should allowed to appear in a movie about Ronald Reagan.  It's a conflict of interest, like Matt says.

Anyway, Drudge's report has the usual far-right mouth-frothers in the expected uproar.  But let's here from a new one!  Here's 14-year-old pundit Kyle Williams (WorldNetDaily's even younger version of Ben Shapiro) -- he balances the fact that he hasn't actually seen "The Reagans" by also denouncing Runaway Jury for portraying gun manufacturers as being "white men" whose "only drive is money" (Hollywood: Dangerous to America):

Matt Drudge aired numerous clips of the film on the "Rush Limbaugh Show" on Friday. The entire thing is a hatchet job on the Reagan Revolution, the revolution of modern-day conservatism. This is nothing short of a retaliatory strike on the GOP.
The entire thing is completely despicable. Although news stories report on a film that has yet to air, I'm confident that the final product will turn out worse than expected. It's another example of the dangerous power of the media.
No, talk radio is not dangerous. National Review, Ann Coulter, Rush Limbaugh, Pat Buchanan, et al are not dangerous. When readers and listeners take in their opinions, they know they are opinions. They can choose to accept them, reject them, consider them or do whatever they want.
With "Runaway Jury," moviegoers let their guard down and open their minds to what promised to be an exciting, suspenseful movie. With the upcoming "The Regans," television viewers, no doubt, will expect an interesting movie and hope to learn some insights into the life of the Reagans, but instead will see liberal propaganda.

Ah, to see the world with the innocent eyes of a child, and to honestly believe that big companies like CBS do things like deliver retalitory strikes on the GOP.  (Kyle never says what the GOP did to make CBS want to retaliate, but I suspect that the network is trying to punish Republicans for not watching David Kelly's "The Brotherhood of Poland N.H.")

And not to rag on Kyle or anything, but one would have to be naive indeed to think that a movie based on a Grisham novel was going to be exciting and suspenseful.

But Kyle does have a point about how somebody could go to the movies, trustingly leave their mind open, and so be reprogrammed by the evil Hollywood liberals.  I can see this poor sap now, coming out of the multiplex and telling his wife, "Now it all makes sense!  Gun manufacturers smoke cigars, rig juries, and ARE ONLY IN IT FOR THE MONEY!  No WONDER they charge for their products!"  And then, just like in the climatic scene of Invasion of the Body Snatchers, his wife is forced to shoot him, because he's become one of THEM!

In any case, I admire Kyle's confidence that "The Reagans" will be even WORSE than he thinks it will be, because "it's another example of the dangerous power of the media":  the power to read your mind, ascertain your overwrought, Matt Drudge-fueled fantasies, and then surpass them by making a movie that is even LESS reverential to the Reagans than you could imagine.  Maybe by having Ronnie back a wacky space-laser system named after a George Lucas movie, or something.

But I kid the people who weren't alive in the '80s.  And since Kyle has written a book (Seen and Heard) which "takes on the establishment, offering clear evidence that a leftist agenda is at work in our nation," I guess I shouldn't mock him for his youth.  But I will say that a home-schooling program that exposes him to Rush Limbaugh and Ann Coulter constitutes child abuse.  I hope the authorities are looking into this.
And speaking of people who grew up never learning the valuable interpersonal skills that public schools can provide, let's check in with Blowhard Bully O'Liar, to get his take on the reported "live in sin, die in sin" line.  Bill uses his Talking Points Memo to says that it's now Ronald Reagan's Turn to know the pain of being defamed -- albeit it not as horribly as Bill O'Reilly has, of course.  I've annotated it, for your convenience:

Talking Points realizes this drum has been pounded again and again by us, but it's worth saying again.  America is becoming a defamation nation where the worst accusations imaginable [e.g., that Bill O'Reilly lied about having won a Peabody award] are acceptable in the elite media [i.e., the media that isn't Fox News].  CBS has big problems here. There's an outcry over the situation. There's plenty of time to cut it out of the film.  If CBS doesn't do it, malice will be charged [by Bill O'Reilly -- the guy behind that Fox lawsuit against Al Franken].

Many Americans have an emotional attachment to Ronald Reagan. They don't want to see him smeared in a TV movie [and many American have an emotional attachment to Bill O'Reilly, and don't want to see Al Franken smear him by pointing out that Bill lived in Westbury, not Levittown].  And there are enough things that Mr. Reagan did wrong that can be legitimately portrayed as with any president.

There comes a time when society has to make a decision.  Right now, defamation is selling and smear merchants of all kinds [i.e., Al Franken] are making big money.  The public is responsible for that [the public will burn in hell for buying Al's book].

If CBS includes that defamatory scene about Ronald Reagan in the movie, I'm not going to watch it.  If every American did the same thing, CBS wouldn't have any viewers.  And believe me, the defamation would be removed. [If every American didn't watch "The Reagans," then CBS would know it wasn't what America wanted to watch, and they wouldn't buy any more programs about the Reagans or conservatives.  Problem solved.  However, the defamation would still be there, even though nobody watched it.  So, new plan: nobody watch ANY programming on CBS until they promise to remove the defamation.  And let their sponsors know that you're going to do this, so they will add to the pressure on the network.  And in the meantime, while you're not watching CBS you'll have more time to enjoy all the fine programming on the Fox News Channel --a channel wihich would NEVER defame anybody!]

But young Kyle and old Bill will be glad to hear that "The Reagans" accepts Ron's assertion "that he knew nothing of the illegal diversion of funds to the contras fighting in Nicaragua"-- at least, per the elite media NY Times.

However, Reagan does reportedly say to Oliver North, "Hypothetically, if you really wanted to help me out, you would sell some arms to Iran and divert the profits to the Contras; but don't tell me anything about it!  And don't tell George anything either, because he's such a wimp."  And Reagan says this while nude!  But if we all boycott Fox News, I bet CBS will take all this out before they air the program.

So, "The Reagans."  I think everybody should spend a lot of time and energy worrying about this television miniseries, and forgot about the problems in Iraq, the Plame leak investigation, exactly who oversold the Iraq threat and why, etc.  And you should boycott all the television networks, all Hollywood movies, and ketchup, just to be on the safe side.
Posted by Scott at 12:04 AM

Fortunately, a couple years later, Kyle Williams grew up and dropped the wingnuttery like the bad habit it was.

Worst part about The Reagans?