Be with you in a second...just making a bet with myself that the same folks who claimed, at volume, that Bloomberg's Big Gulp ban made him Hitler on the Hudson will rise in full-throated defense of the Littlest Billionaire over this:

Mayor Bloomberg: NYPD ‘Stops Whites Too Much And Minorities Too Little’

New York City Mayor Michael Bloomberg defended the police department’s controversial stop and frisk program during a radio interview on Friday morning, and complained that the NYPD was stopping too many white people.

"One newspaper and one news service, they just keep saying ‘oh it’s a disproportionate percentage of a particular ethnic group.’ That may be, but it’s not a disproportionate percentage of those who witnesses and victims describe as committing the [crime]. In that case, incidentally, I think we disproportionately stop whites too much and minorities too little. It’s exactly the reverse of what they’re saying. I don’t know where they went to school, but they certainly didn’t take a math course. Or a logic course."

The statistics are overwhelming. An independent study of the city’s stop-and-frisk program found that 87 percent of the 685,724 stops in 2011 — a record high — were of blacks and latinos. Young black men between the ages of 14 and 24 were stopped 106% of the time — as in, there were more stops of young black men than the entire population of young black men. 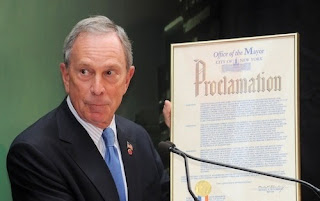 "I'm very pleased and honored by this... Wait a second...This Proclaims me an asshole!"

Anyway, it's all academic now.  Under pressure from a civil suit filed against the NYPD and the Bloomberg Administration, the Mayor has directed the Police Commissioner to replace the controversial stop-and-frisk with a new program: stop-and-frisky. 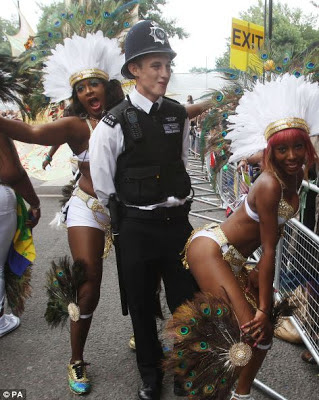 Under this new system, adopted from a successful program introduced last year in Britain, subjects detained by police may not be searched without probable cause, but may be required to spontaneously "frolic, caper, or gambol." Statistically, most people take this as a cue to dance, according to Metropolitan Police Service spokesperson Brince Funnelwidth.  "Some people go low impact, of course; just do The Robot, or Prancercise.  But most choose to get jiggy with it, especially if they've got some Belgian New Beat or speedcore on their mp3 player. Irish stepdancing is the most effective for dislodging weapons and contraband of course, particularly the Treble Hop Back move, but really any high energy dance style is sufficient to provide an officer with probable cause.  One constable told me about a subject who performed a rapid series of stag leaps and chaînés that sent concealed bags of meth flying as far as six, seven meters away."

British police point to polling which suggests the public actually prefers the new program to being frisked.  "It's less invasive," says Sergeant Funnelwidth, "And allows more room for self-expression.  It's been such a success, in fact, that most members of the public now leave their homes dressed to move, and with a two-minute song prepared."

Some lawyers concerned with civil liberties point out, however, that stop-and-frisky has actually led to increased racial profiling.  Statistics show that minorities were involved in 91% of all stops, whites in only 6% (the remaining 3% involved stops of bollards, mannequins, and Nelson's Column by constables who were "more than ordinarily drunk"at the time).    Funnelwidth concedes that Stop-and-Frisky has not eliminated all problems of ethnic bias, but believes the disparity has been overstated by plaintiffs' attorneys, and even echoes Mayor Bloomberg's belief that Met officers stop far too many whites.  "Have you ever seen them dance?  It's bloody awful, mate."
Posted by Scott at 2:27 PM

Finally...a police program I can support!
~

The NY police should hang out around Wall St, and stop & frisk all those brokers and bankers.

Some people see Bloomberg as intelligent. This is the man who said " "It's not only to protect Americans. It's America's responsibility to protect people around the world who want to be free." Yeah, right. Tell that to the hundreds of thousands dead, innocent civilians. Every war the US is involved in is ultimately about one thing only: money.

I see so many kids in Bensonurst and Bay Ridge being stopped and frisked, it's true