A day late, but this post includes a look into the dark psychosexual dynamics which informed, if not defined, the work of Bil Keane's heartwarming classic, and explains why his cartoon was shaped like a peephole. 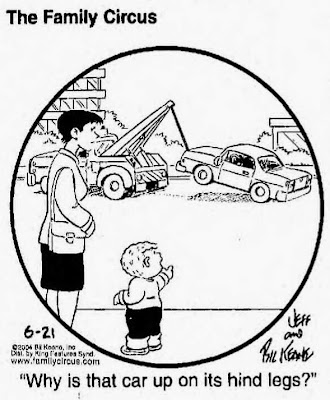 A smartly dressed Mommy is standing on a city sidewalk with Jeffy.  Jeffy points at a car that is being towed and asks, "Why is that car up on its hind legs?"

Jeffy, when a car and a truck love each other very much ...

This strip is obviously a call to pass the Federal Marriage Amendment (because if gay marriage is made legal, then trucks will marry cars, and even have sex with their "spouses" on public streets, right in front of your impressionable toddlers).

Mommy (looking very stylish and sexy in her Jackie Kennedy-esque designer suit) represents America's female voters.  Jeffy is, as usual, a stand-in for Dubya.  Notice how Mommy seems to be distancing herself from Jeffy, and isn't paying any attention to his childish prattle?

Keane is predicting that the 2004 Presidential Election will have the largest "gender gap" of any election since 1980, and the lack of support from female votesrs will be a key factor in Bush's defeat.

Oh, and just like Mommy is planning to leave Jeffy on the street and race home before he notices she's gone, Laura will leave George shortly after his electoral defeat.

But I imagine there are other ways to interpret this comic strip -- maybe even, in a world of non-situational ethics, a RIGHT way.  Let's see what you've got.

Pete M. has alerted us to the prophetic cartoons of Hal Lindsey; Pete suggests we use them for our Sunday prognostications, which sounds like an excellent idea.  So, to make up for yesterday, check out this one depicting The Rapture Investigation Committee.

Also, if you value your soul, you should carefully ponder the meaning of Pete's new batch of Christian T-shirt designs over at The Dark Window.  I think my favorite is the one with Satan reading the Bible -- it makes every day Halloween!
Posted by Scott at 2:06 AM

Well, Jeffy, when two automobiles love each other very much...

Now the government is towing it away to Area 51 so that the truth will remain hidden.
~

No real kid, especially a boy, would give a damm about the car. They'd be jumping up and down saying "I'm gonna have a TOW TRUCK when I grow up!"

"And the bag across her shoulder made her look a little like a military man." --Paul McCartney

"The Rapture Investigation Committee" made me Barf Like A Chicken.

I had forgotten about Dark Window