I Really Need to File a Restraining Order Against Reince Preibus

We tend to mention a lot of right wing luminaries here on the blog, which is an unpleasant but unavoidable byproduct of our charter, and I long ago made my peace with it. Unfortunately, the ever-more cephalopodic nature of internet algorithms has led to a situation I did not foresee, and I now find myself faced with the necessity of committing civil disobedience to the Law of Unintended Consequences.

In a nutshell, I'm being stalked by the RNC.  Here's a look at my email inbox:

Sure, I could just flag all these as spam and be done with it, but most of the letters achieve such a desperate tone that I'm afraid any rejection might drive their authors to do something desperate. For instance, Sara Armstrong, Chief Operating Officer of the RNC is suffering from the delusion that George W. Bush was real, and not a ghost story told around campfires to frighten Cub Scouts. Fortunately, there's a cure for her condition -- robust T-shirt sales -- but thanks to Obamacare it doesn't come cheap.


That’s what I remember when I think of the leadership of President George W. Bush. He led our nation through some of the most challenging moments of our nation’s history.

I'll go even further. His leadership made even some of our nation's most mundane moments seem challenging.

Add an "i" to that sentence and I'll agree.


The President we have today thinks our country should “lead from behind” and has significantly diminished the United States’ standing in the world — and worse, he has made us less safe.

Worst of all, this President doesn't agree that quotation marks should no longer be used to indicate actual quotes, but instead be sprinkled randomly through a paragraph as decorative "Freedom Dimples."


I miss the leadership of President George W. Bush. And I miss him.

I'll say what I always do whenever someone starts mooning over their ex: "You're better off without him."


I had the privilege of serving in his White House, and I saw the character that he and his family provided our nation. I will be forever grateful for their service.

Hm, let's check Sara's bio, and see from what lofty perch she observed Bush momentously lead our nation through some of our nation's most challenging moments:

Her duties including calling anyone who wants to cancel their membership and demanding, "Why is it that you're not wanting to have the No. 1-rated political party with 34% approval rating available?"

Worked at the White House from June 2002 to Jan. 2009. Special Assistant to the President

"Thanks honey, but next time make it two sugars."

and Deputy Chief of Staff to First Lady Laura Bush

"Thanks hon, but next time skip the sugar and add two fingers of Old Crow."

Director of the Visitors Office;

She lovingly made out Jeff Gannon's press pass each day.

i.e., "Read the Thank You cards other people sent to Mrs. Bush." Presumably with the First Lady's permission, but judging by the six emails I've gotten from Sara over the last five days, asking if I've read the previous half dozen emails, she is a trifle nosy.  Anyway, bona fides established! On with today's pitch:


Tomorrow is President George W. Bush’s Birthday. It’s a moment that has reminded us of what leadership in the White House really looks like.

Because real leadership looks like a birthday party?  Whenever I feel uncertain about the direction our country is taking, I like to imagine President Bush, Dick Cheney, Donald Rumsfeld, and Condoleeza Rice sitting around a conference table in the Situation Room, wearing festive party hats and looking resolute.

Fortunately, Sara's wistful mood of regret can be assuaged by ordering this "I Miss W" tee: 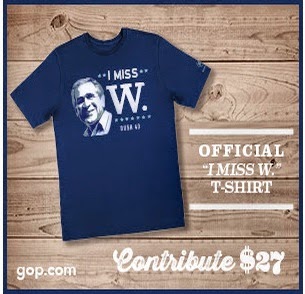 The perfect compliment to a friend or loved one wearing an "I'm With Stupid" shirt.
Posted by Scott at 12:12 AM

Could be worse. Laura was literate. Imagine being the President's Deppity Erector (hehheh) of Co'spondense:

"Dear Diarrhea....(heh heh, put one them smileyface thingies there, Sa'a), taday, I looked inna eyes of Vladimir...that don' look right, Valdamir, that looks right...Vladimir Pooting (heh hehe, nother smiley thingie) an thought he and I could have a beer or four. If I could still drink, which I do...don't write that!"

More likely that I'll buy a shirt like that for the friend wearing the "I am stupid" shirt.


Freedom Dimples - that will be my code name for when I infiltrate the White House's Thank You Note Division and learn their secret stationery choices (I think I can get the PRC to sponsor me, but I will work for the highest bidder). Great job, Scott. But I too miss George W. Making fun of Sarah Palin is seasonal work, and I think Michele Bachmann is going to be committed soon.

S.Z. is Hallmarked For Death!

"I Miss W." at least has the virtue of brevity. As compared to "Please Do Not Leave Me Out in the Rain or I'll Drown".

Sorry, had to say that. Carry on.

Oh, I feel so sorry for this poor, pathetic woman. Can't you insensitive pranksters see that this supposed fund-raising appeal is actually a cry for help? We should initiate a kickstarter or a petition or something, to get Sara into treatment.