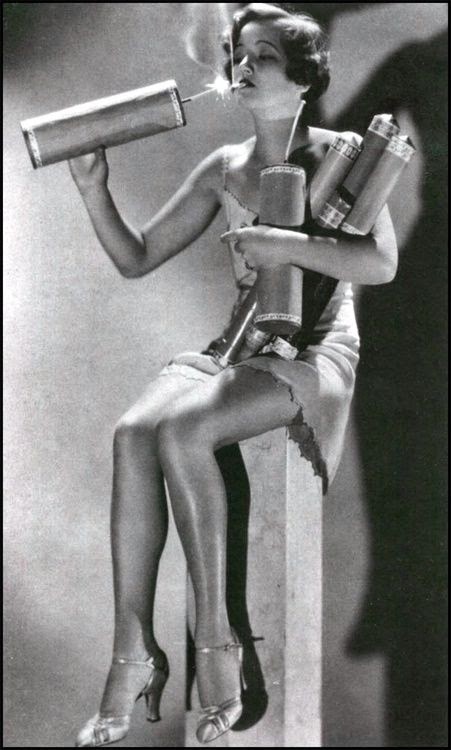 Say goodbye to those eyebrows!

Who got a match?

Yay independence, blow something up!

Except for you Southern Californians. You keep your matches in your pockets so you don't burn the foothills down.

Wow, no wonder the parents of flappers had doubts about their daughters' lifestyle. Bootleg booze and sex in the back of a roadster, okay... but this?

Thankfully, sort of, it's been way muggy in SoCal of late, and though uncomfortable (what are we, Florida?), the high humidity has undoubtedly helped to keep the wildfire threat down.

Believe it or not, nobody managed to start any foothill-town-evacuating wildfires on the fourth.

I guess that the way-too-obvious Freudianisms in this picture are beyond needing statement?

Bit bony for my taste, but great hair!

And if you wanna enjoy the thrill of being surrounded by noise-addicted firebugs in a fucking TINDERBOX, enjoy the 4th or NYE in any neighborhood of NOLA that was built before 1950. Nothing but wall-to-wall dried-up old wood, made even MORE flammable by the toxic waste residue from Katrina that NOBODY cleaned-up... but nobody "understands" or CARES as to why 4-wheelers, dirt bikes, and fireworks are ILLEGAL here... Go fucking figure... Even when one of them T-bones an 18-wheeler with a 6-year-old kid on the back of that fucking ATV, they still won't have a fucking clue, they'll blame it on THE CITY or the manufacturer or whatever. And no, I don't usually side with corporate-suckling republicunts on ANY issue, but when people INTENTIONALLY ENDANGER THEIR OWN SPAWN/COUSINS/PLAY-COUSINS FOR THE "THRILL" OF RIDING A 4-WHEELER IN THE MIDDLE OF A ONE-WAY STREET, GOING THE WRONG FUCKING WAY --- fuck 'em. Even *I* never did that shit, back in the day of THREE-WHEELERS. And I used to fucking FLY on that bitch, but somehow, never managed to flip one coming downhill and break my OWN neck. Which, of course, is why we no longer HAVE 3-wheelers.

All my best wishes go out to you permanently-endangered Cali folk --- seriously. Stay safe, enjoy siphoning the neighbor's pool when the yards get dry enough to be dangerous (still don't see the point of Bermuda OR St. Augustine grass, when that could be FOOD!), and shoot tourists on sight. Yes, they do too deserve it. If not now, soon.

They make "the purge" look LOGICAL... like one of my few remaining/readable bumperstickers say, "If it's TOURIST SEASON, why can't we SHOOT 'EM?"

"You're a swell flapper, honey! What's under the flaps?"