Tissue? I Barely Know You.

Things have been going relatively well for Republican presidential candidate Ben Carson. He performed respectably at the recent debate, he's been rising in the polls, and unlike Donald Trump he can enter his house justified, since he doesn't pay an esthetician to hose him down each day with a proprietary mixture of mineral oil and finely ground Cheetos. However, all that may change, after the Washington Post reported that Dr. Carson was a receiver of those bootlegged baby parts that seem to tumble out of Planned Parenthood the way color TVs fall off the backs of trucks in New Jersey.

Here's the heartbroken, yet gamely tapdancing headline at LifeNews.com:


Ben Carson on Report He Did Fetal Tissue Research: I Didn’t “Kill Babies and Take Their Tissue”

"I Only Beat Up Babies and Took Their Lunch Money."

Two aborted fetuses, actually.  Not because Dr. Carson is a monster whose lust for cord blood can never be sated, but because he's a conscientious and thorough researcher, and because Fetus 'R Us was having a two-for-one sale.  Anyway, it was decades ago, and if he hadn't taken that baby's tissue back then, some other doctor would be removing it's prostate about now.

Carson said what he did is entirely different from the scandal at Planned Parenthood — where unborn babies are purposefully killed in order to use their body parts for research purposes.

Oh, that's why those women came to Planned Parenthood -- they weren't patients in need of abortions, they were farmers in need of help with the harvest.  "Cyrus, it's a bumper crop this year, an' we're gonna need us a hired man to help ya thresh mah womb."


Carson has been critical of not only the Planned Parenthood abortion business for selling aborted babies and their body parts for research, but he said defenders of that have oversold the benefits of fetal tissue research.

"So-called scientists have been experimenting with fetal tissue for years without perfecting it. When you blow your nose in it, it still just makes a big mess."

Okay, turns out they're available on Etsy, which makes my criticism slightly more fact-based than Dr. Carson's, and therefore, less newsworthy.


Carson calls the reports that he conducted research with aborted babies “desperate.” He appears to say that there is a difference between what he did and what Planned Parenthood and others are doing and what he did.

And he appears to say it like a character from an Ed Wood movie.

Carson said that “you have to look at the intent” of using fetal tissue.

This is indeed the crucial distinction. Carson -- and Planned Parenthood, for that matter -- intended the fetal tissue be used to further medical research. Mr. Ertelt intends to use fetal tissue as a renewable source of snood lube.

I sure hope Mr. Ertelt is available to interpret for Dr. Carson if he ever wins the presidency, or we won't know what the hell is going on.

MR. ERTELT:  He appears to say we should go to war with Iran. Also he appears to be angry that the West Wing break room is out of those little cheddar-flavored fish crackers...


“To willfully ignore evidence that you have for some ideological reason is wrong. If you’re killing babies and taking the tissue, that’s a very different thing than taking a dead specimen and keeping a record of it,” Carson said.

So basically, Ben Carson is the wimpy John Dall character to Planned Parenthood's murderous Peggy Cummins in Gun Crazy. You can almost hear him mutter, "I let you do my killing for me."

Speaking of regrets, our good friend Anntichrist S. Coulter was kind enough to use some of her brief online time at the public library to inform me I screwed up and forgot to write a post in honor of Mentis Fugit, whose birthday was yesterday. Which is a fairly egregious bout of pooch-screwing, as Mentis has been a great friend of the blog, as many an O.G. Crapper can attest. So please join me in wishing him a very happy -- if embarrassingly belated -- birthday. 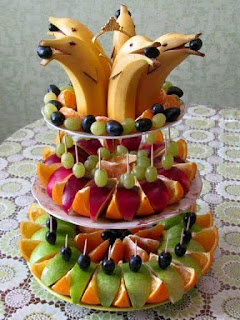 Then the obligatory old timey cheesecake photo (how about a bit o' Barely Legal Myrna Loy in a bathing suit?): 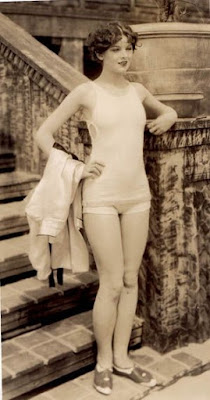 And last but not least, the customary Sexy Birthday Lizard! 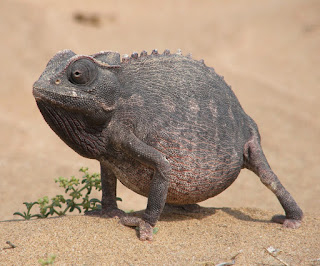 (Since Myrna is rocking that flat-chested Flapper look, I thought we could go with a curvier lizard for once.)

Happy birthday, Mentis! And Ben? Best of luck at the next debate explaining the nuanced differences between villainous tissue donors and virtuous tissue recipients.
Posted by Scott at 11:45 PM

Thanks for the laugh!

So, let me guess: this species of SBL evolved to mimic road-kill?

As much fun as it is watching Dr. Ben have his Ralph Kramden "humenahumena" moment, he's too useful to become a pariah. A little exculpatory word salad, and voila! He'll be right back in the fold.

The important question is: did the Good Doctor's tissue samples come from Planned Parenthood, or where?

I Love those lizards. Think I'd like to be one in my next life.

Happy birthday one day late, Mentis. But face it, even if that Flipper confection had been delivered on the right day, you'd still be working on it today - assuming you had the heart to EAT those cute dolphins! But there's a solution: the Banana Daiquiri - and that way the little banana cetaceans can enjoy their proper liquid element, and so can you.

So Carson isn't much different from the dudes who found Exxon and decided global warming was a hoax. That really fails to surprise me at all. It actually kind of cheers me up some, because the other option is believing that he got real fucking dumb suddenly.

As a woman who has had an abortion, and who has also recently donated about two and a half feet of hair, I would like to confirm that I did the former because I didn't want a baby, neither did my partner at the time (and at this point the putative baby would absolutely be old enough to have decided it didn't want anything to do with us either) and the latter because I didn't want the long hair. If I'd been aware at the time that they could have used the tissue, I would have donated that too. It certainly would help more people than the hair. Either way, it was absolutely not what got me in the door of the clinic. I don't know anyone else who was swayed by one of those big Donate Fetus Here signs in the window, either. It usually takes at least the promise of a toaster.

And, you know, etsy is fine I guess, but I still miss Dapper Dicks. Hopefully we'll always have Bad Dragon.

So, shorter Ben Carson: it's different when I do it!


That thar is one helluva sessssy lizared, son. Kiwi-boy should be along directly, unless I have to kick him again... No telling WHAT he's up to down thar on the far corner of the Pacific...

Thanks for the update!

And Ben Carson? Seriously? Anybody remember the expression "he could GAG A MAGGOT"??? Yeah, that guy.

Well many thanks for the birthday greets, though my profile is so low these days it has to look up to see Bobby Jindal's polling figures in the GOP Clown Car (auf Deutsch, der Republikanerpossenreißerwagen.)