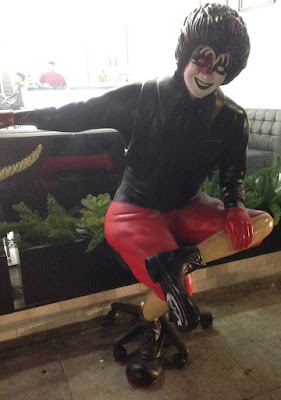 Pundits working the business beat are suggesting that McDonalds may be doomed, after suffering record-setting lows in customer satisfaction surveys and announcing the "closing [of] hundreds of locations this year". But perhaps the clearest indication that the once mighty fast food giant is in its last throes is the news that mascot Ronald McDonald has defected from McDonaldland to join the KISS Army. 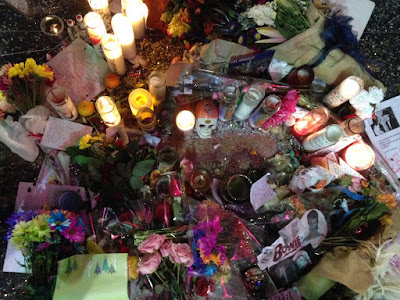 Walking down Hollywood Boulevard last night, I was happy to see the shrine that sprouted up around David Bowie's star was going strong a week after his demise -- votive candles still alight, fresh flowers replacing wilted bouquets, touch-up dusting of glitter applied to the brass letters. Then two 12-year old boys decided to stop by and ruin it:

12-YEAR BOY OLD WHO WANTS TO SEEM COOL: (Craning his neck to read the name on the star) I knew it. It's David Bau-wee.

Okay, you two little shits...! Crawl back into your mothers' wombs and bake until you're done this time.

And finally, for this week's Beast Blogging:

My friend PJ wrote a formal apology (with an explanation) for blowing a deadline last week, and used her two cats Belle and Willow to illustrate her many excuses, all of which I then turned into a video. Click and enjoy.
Posted by Scott at 12:23 AM

and yet the Scottish clown reports 5.7% same store sales growth for the 4th quarter.