Alex Jones is right! First Justice Antonin Scalia dies of so-called "natural causes" at the tender age of 79 and now Eighties pop purveyor Vanity has perished at the even tenderer age of 57, which is 79 if you reverse it and add 4, the number of Horsemen of the Apocalypse. Wake up, people! This can't be a coincidence, especially when you consider the underlying connections (Scalia also got his start as a lingerie-clad Prince discovery, with his debut album Vaffanculo resulting in four Top Ten singles in 1985 and an nomination to the Supreme Court in 1986). Vanity also had a big year in '86, turning down President Ronald Reagan's offer to appoint her Surgeon General because she figured he was drunk and probably wouldn't remember in the morning, but accepting the female lead in Never Too Young To Die, which was the Spy Kids of its day, just with more boobs and crossdressing.

Anyway, pretty much everything I know about Vanity I learned from this movie, so let's celebrate her life with this piece from Better Living Through Bad Movies. 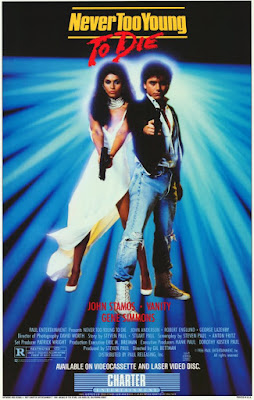 John Stamos first achieved notoriety as “Blackie,” the sensitive, cycle-straddling delinquent on General Hospital, before ultimately rising to a flaming, Phoenix-like apotheosis of fame as “Uncle Jesse” on Full House. In between, he made a lame stab at snatching the action hero tiara from Kurt Thomas (of Gymkata fame) in a contest that resembled two frail old women struggling over a discounted bra at a Woolworth clearance sale.

But John had a couple of advantages over Kurt in their Battle of the Network Mullets. First, his character is called “Lance Stargrove,” a name so manly that every actor working in male porn films in the 1980s must have been kicking himself that he didn’t think of it first. Second, John’s dad is George Lazenby, who comes bearing impeccable spy film credentials, having thoroughly stunk up On Her Majesty’s Secret Service; and as the movie opens, George is trying to foil arch-criminal Gene Simmons (yes, the guy from KISS), who is playing an evil hermaphrodite with a super-powered middle finger.

George infiltrates Gene’s headquarters with a group of commandos who eventually get bored and frag him.  Eventually, Gene makes his dramatic entrance; a puffy fellow sporting six-inch stilleto boots, Mr. Spock’s eyebrows, and Roseanne Rosannadanna’s hair, Gene works himself into such a flamboyant, cackling tizzy that he makes Caesar Romero’s Joker look like the farmer in “American Gothic.” Then he shoots George too, probably for that recurring role he had on B.J. and the Bear.

At George’s funeral, Vanity shows up to make soulful goo-goo eyes at Lance through her veil. As a former Prince protégé, Vanity has quite a bit of experience in feigning attraction to slight, androgynous men with pouffy hair, and is therefore the perfect choice for Lance’s love interest.

Seeking a break from the film’s relentless pace, Lance retreats to his dad’s farm in Ojai. But Vanity is already there, prancing around the barn in jodhpurs and one of Prince’s lacy blouses, and shooting it out with two of Gene’s thugs. (They don’t introduce themselves, but they appear to be Duke Nukem and the Artful Dodger from Oliver!) Lance is utterly confused, and for the first time, we’re on his side.

Later, Vanity meets with her superior, CIA spymaster Carruthers, who’s played by Gene Simmons in a red wig and fake beard. (Shhh! We’re not supposed to know.) Gene orders Vanity to find Gene at a nightclub where he’s performing, and kill him. Lance dons the Miami Vice look—blue t-shirt, and a shiny sport coat with the sleeves hitched up—and follows her to the nightclub, which turns out to be a cross between Fellini’s Satyricon and the Riverside County Sheriff’s Department impound lot.

Inside, a paunchy Gene sashays around in a sequined body stocking, batting his false eyelashes and shaking the long plumes of pink feathers that trail from his elaborate headdress as he shrieks out a song. It’s not the most entertaining musical number ever filmed, but remember, it’s an action movie, so they had to squeeze in at least one macho character.

Next on our tour of Southern California spots where you can shoot a movie without expensive filming permits, Lance hops on a motorcycle and follows Vanity into the desert. She tries to lose him, and thanks to the editing, there are several implied car stunts. Then, suddenly, John is attacked by some homeless guys on motorized carrousel horses, who use wicked-looking battle-axes to gently poke at him as though checking to see if a pot roast is tender.

Vanity and Lance get captured by the Mad Max cast, and Lance wakes with a start back in Ojai (which actually is kind of scary—take it from one who knows). In the best scene of the film, two of Gene’s henchmen torture Lance by banging his head around the insides of the kitchen sink like a bell clapper. They try to break his spirit by squashing a cherry tomato against his cheek, then they spank him until he cries, and throw him into the bookcase.

But Lance spots a broken picture of he and his dad amongst the wreckage, and it apparently has the same effect on him that spinach has on Popeye. He leaps to his feet and suddenly starts kicking ass Gymkata-style, while a Jan Hammer wannabe plays listless, yet vaguely triumphant music on a synthesizer.

Realizing that Vanity is in mortal danger, and no doubt being tortured at this very instant, Lance must race to her rescue! But not right now. First, he decides to change his shirt and wander around the house for awhile.

Meanwhile, Gene is now being aided in his evil master plan—whatever the hell it is—by Freddy Krueger from Nightmare on Elm Street, who for some reason is dressed like one of the Archies.

Eventually, Lance goes off to infiltrate Gene’s secret headquarters, which is located in an abandoned foundry in Fontana because there’s no lock on the gate and the crew could film there for free. Our hero finds Vanity chained down and spread-eagled on a cement slab, with the camera pointed at her crotch. Surprisingly, her crotch gives a very nuanced performance, but all good things must come to an end, and Lance rescues her by...Well, pretty much by just showing up.

Safely back home, Vanity tries to kiss Lance. This makes our hero visibly uncomfortable, and he promptly retreats into the house to watch TV, having suddenly remembered that Christopher Lowell is doing a fabulous program on HGTV about marbleizing techniques.

Vanity refuses to take a hint, and strips down to her bikini. Lance wrings his hands and gazes anxiously skyward. Vanity doggedly rubs oil on her chest and thighs, licks her lips, doffs her top, and basically does everything possible to seduce Lance short of slipping him a roofie. Eventually, she’s stark naked and shivering under the spray from a garden hose, when Lance abruptly stumbles toward her. Perhaps he was suddenly overcome by passion, although my theory is that the director was crouching just off-camera, and jabbed him in the ass with a hatpin.

Mercifully for everyone involved, the sex scene is cut short by terrorists. Lance and Vanity are kidnapped and whisked aboard a helicopter, where Gene pulls off the beard and wig and reveals that Gene is actually...Gene! As surprises go, it’s not exactly The Crying Game.

Gene takes them to a Junior College amphitheater where they can shoot on weekends and nobody will know. Here we get the only actual sex in the film, as Gene flaps his prehensile tongue and shoves it down Vanity’s throat like a plumber’s snake. Lance challenges Duke Nukem to a one-on-one fight “with a real man!” Surprisingly, he means himself. Duke agrees, but it turns out that Lance’s definition of “a real man” is rather elastic, and includes a hysterical wuss who will snatch the Uzi from a slack-jawed spectator and gun down his unarmed opponent. Before he can embarrass himself further, however, the Green Berets arrive, having apparently secured transportation by renting the Long  Beach Harbor excursion helicopter for a few hours. Lance fires indiscriminately into the extras in an effort to clear the set, since time is money.

Gene climbs into a big rig truck and tries to flee by passing himself off as Large Marge. But Lance catches up to him, and in the climactic battle, they literally scratch and bite each other’s nipples, until Lance suddenly throws a CPR dummy over a dam and declares victory. The Director of the CIA offers Lance a job as a secret agent, but he’s too much of a wuss, and runs away. The End.

And what lessons does Never Too Young to Die teach us about being an ’80s action hero?

First, that if you’re big and beefy, you can get by with just one two-syllable name, such as Rambo, Rocky, Conan, or Roseanne. However, if you’re kinda delicate and boyish, you’ll need a strong, masculine moniker to give you gravitas: you know, something like “Lance Stargrove” or “Rod Parsley” or “Dick Cheney.”

And second, that while being an action hero may sound cool, it’s not all fun and games. You might have to withstand torture, such as water-boarding, electro-shock, or having to watch a dumpy, aging rock star perform in Victor/Victoria. And the job could entail indignities, like cherry tomato facials, or wearing Don Johnson’s hand-me-downs. But worst of all, naked starlets might follow you around, demanding that you make out with them, thus exposing you to biohazards such as cooties!

So, think the whole thing through before you sign up for that PCDI correspondence course in Criminal Justice and Action Hero Vocational Training. Admittedly, their spokesman makes it sound exciting. (“I’m Simon MacCorkindale. You might remember me as Jonathan Chase, the man who solved crimes by changing into animals in the TV series Manimal. And if you want a great career in the exciting fields of crime fighting, accounting, PC repair, or shape shifting, call now for our free information packet.”) But Simon doesn’t tell you about the embarrassing wardrobe requirements, the torture, and the icky, old girls!
Posted by Scott at 12:06 AM

Brilliantly wicked, Scott, though I may have some unpleasant dreams about that "prehensile tongue"... even though, when it comes to bipedal "housepets," the oral exam for the position IS mandatory, the way that you too-accurately described Gene's tongue has pretty much guaranteed that I'm going to STAY "retired" for another ten years.

I'm still befuddled as hell, though, trying to figure-out how in the FUCK that they got all $12,000 in this flick's budget by robbing just ONE Kwik-E-Mart... heh.

Scalia also got his start as a lingerie-clad Prince discovery