Rather than getting drunk, the traditional American method of honoring the founder of Christianity in Ireland, let's put down the bottle, pick up the remote, and watch a crappy movie. At least then you'll have a reason to get drunk. 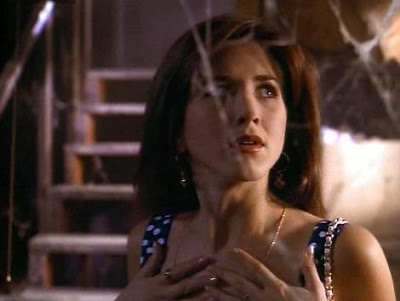 A limousine pulls up to a rustic cottage and an Irishman climbs out. At least, we assume he's Irish, because he's stinking drunk and speaks in a brogue so thick it can't be natural, and was probably produced in post-production by a team of Foley artists who soaked a Cranberries CD in Bushmills and strained it through a cable knit sweater. He's also apparently a criminal, because he tells his long-suffering wife that he captured a leprechaun (that's false imprisonment -- a misdemeanor in California, where the film was shot), made the wee person reveal where his gold was hidden (criminal coercion-- usually a Class A misdemeanor, but in this case used in furtherance of larceny, so the DA will probably bump it up to a Class D felony) and stole it (this can be either a misdemeanor or a felony, as the law does not specify the monetary value of a pot of gold. However, California considers it grand theft if "domestic fowls, avocados, olives, or other farm crops are taken of a value exceeding two hundred fifty dollars." So I'm going to recommend this guy plead out.

Drunk Irishman smuggled the gold from Ireland to Saugus, California in his mother's urn, which was brilliant, because ashes and gold coins are both unusually heavy, and cremains also make a merry jingling sound when you shake them. Unfortunately, the Leprechaun stowed away in his suitcase and got through customs, presumably by impersonating one of Jeff Dunham's ugly ventriloquist figures. He pops out of the Samsonite and Long-Suffering Wife promptly falls down the basement stairs and breaks her neck.

10 Years Later. Jennifer Aniston arrives to spend the summer with her Dad, who is apparently a professional Billy Ray Cyrus impersonator. Jennifer complains that she doesn't like being in New Mexico, but Dad reminds her that it's actually North Dakota, hinting that she's a professional idiot. She's also a whiny little brat from Los Angeles who hates the tumbledown cottage, bitches about the lack of cable, objects to the free-roaming tarantulas, and isn't thrilled about the musty scent of dwarf in the basement.

Jennifer dials her early 90s cellular telephone, but before she can make a reservation at the local hotel, she bumps into the local hunk, Nathan, who gets her feminist dander up by chortling at her distaste for tarantulas and pointing out that no man fears a house! (Except William Katt in House.) 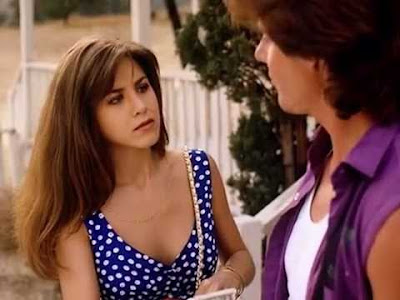 "It's hard to tell from this angle, but you look like you might have a penis somewhere on your person..."

Nathan's ten year old brother Alex arrives in a truck with his large, dumb friend who's like Lennie from Of Mice and Men, if Lennie had spent less time dreaming about rabbits and more time talking crap about magic and alien abductions. Nathan, Alex, and Lennie are all here to paint the picket fence, having been hired by Jennifer's dad, or maybe just talked into it by Tom Sawyer.

Jennifer decides to stand up for Girl Power and Third Wave Feminism and rebuke Nathan's sexism by bringing him a nice cool drink. Because horny. He repays her kindness by tossing a dusty canvas sack on her head, then suggesting they break open the crate containing the imprisoned Leprechaun for no apparent reason except he's also stupid. I dread to think of the child these two idiots would produce, but since they both have amazingly bouncy, shiny, Pert Plus-quality hair, I'm sure their progeny could get a job as a TV evangelist, or successfully run for Congressman from New Mexico even though he's really in North Dakota.

Nathan and Jennifer’s efforts to unleash hell are stymied in the nick of time when Lennie has a slip and fall mishap while painting and accidentally joins the Blue Man Group. But then, after washing all the paint off himself in seconds, perhaps by using one of those turpentine-based shampoo and conditioners, Lennie frees the Leprechaun. A rainbow suddenly appears in the sky, and Lennie and Alex follow it to the Leprechaun's gold, where the two immediately start re-enacting the last act of Treasure of the Sierra Madre. But don't get your hopes up they're going to kill each other, because Alex decides to use all the gold to pay for a brain operation that will make Lennie smart, just like in Flowers for Algernon, proving that Alex only seems rude and self-centered, and that deep down he's really the stupidest person in this movie.

The Leprechaun crawls under Nathan's truck and sensually caresses Jennifer's shins, then gives her a nasty scratch. Dad instantly deduces it was a cat, maybe a rabid one, and sticks his arm into a hollow log to catch it; instead sustaining a bloody Leprechaun bite. Okay, I may have been hasty about deciding who's the stupidest character here, because at this point, it's anybody's game.

The gang drives Dad to the hospital in town, with the Leprechaun in hot pursuit on a tricycle. Alex and Lennie give one of the gold pieces to a coin dealer to study. After they leave, the Leprechaun leaps out of the dealer's safe, advises him that "it's not nice to steal from leprechauns" seizes the gold coin, then gives him a nasty bite on the upper thigh. This is not strictly legal, because under California law, a peace officer may impound stolen property, "except coins, monetized bullion, or commercial grade ingots in the possession of a pawnbroker, or coin dealer." So the Leprechaun is clearly a bad cop, a loose cannon who doesn’t play by the rules. Joe Friday would never have taken the coin; he would have followed LAPD procedure and merely bit the guy's thigh.

Back at the house, the kitchen has been torn apart: cabinets and drawers have been ripped open, food has been strewn all over the floor, and Jennifer's shoes have been polished and neatly arranged on the table, so Nathan figures it was a bear.

Jennifer, Alex, and Lennie cower inside while Nathan goes outside with a flashlight to find the ursine foot fetishist, but he trips and falls in a bear trap. It's ironic, but he shouldn't have fingered a bear for the kitchen B&E, because those bastards always get even.

Nathan blasts the Leprechaun with a shotgun, and they try to escape in his truck, but in accordance with the California State Penal Code, Section 2467, the gun doesn't kill the monster and the truck won’t start.

Things haven gotten desperate. Nathan's laid up with a leg injury and the others are stupid, so now it's up to Jennifer. She retrieves the gold from its hiding place and turns it over to the Leprechaun. But there's one piece missing, because Lennie swallowed it. So now they must fight for their lives against the murderous and immortal creature while waiting for Lennie's bowels to move. Nathan repeatedly shoots the Leprechaun, even though he's immune to bullets because hey -- it's something to do. Meanwhile the Leprechaun, equally bored, tries to liven things up by sticking a disembodied hand out of a drawer and fondling Nathan's balls. It's not scary or funny, but if you've ever wondered what it's like to watch a Japanese-style molestation porn video starring Thing from The Addams Family...

Our gang drives out to the nursing home where the Drunk Irishman has been ever since he had his stroke in the first scene. Jennifer finds him hanging upside down in the elevator like a bloody side of beef, but he's still full of helpful exposition, and explains that you can only kill a Leprechaun with a freshly plucked four-leaf clover.

Jennifer, Nathan, and Lennie pick through a clover patch, but Jennifer has lost her faith in magic, or something. Lennie tells her she has to believe, she just has to! Jennifer agrees, and promptly finds a four-leaf clover. Which is a relief, because while the action sequences haven’t exactly bowled me over, it turns out they're better than watching the main characters weeding.

Alex uses a slingshot to shoot the clover into the Leprechaun's mouth, which makes the monster get gross and gooey, and then fall into the well. And just to make sure the local water table is thoroughly poisoned, Nathan pours in a 5-gallon can of gasoline and lights it on fire, blowing up the well. But the Leprechaun's voice rises from the smoldering depths to assure us that while he's been killed fair and square, he will be back, in Leprechaun 2, Leprechaun 3, Leprechaun 4: In Space, Leprechaun in the Hood, Leprechaun: Back to tha Hood, and Leprechaun: Origins. Jennifer Aniston, on the other hand, had to spend the next ten years of her life explaining her haircut and listening to Matthew Perry uttering words in a wry tone of voice.

So what have we learned from this film? Mostly that Law & Order's opening credits didn't tell us the whole story, and that any future series in the franchise should begin with these words: "In the criminal justice system, the people are represented by three separate yet equally important groups: the police, who investigate crime; the district attorneys, who prosecute the offenders; and the Leprechauns, who harass the future sitcom stars and punish drunken Irish stereotypes for gold theft and excessive brogueing. These are their stories."

If you think your review is going to make me change my IMDB rating of this movie from 4.7 to 4.8, you're mistaken.

It was worth a shot.

In case you were wondering, Scott wasn't making up those sequel titles. Those are all actual films.

Wow! I can't begin to keep up with all the really bad crap out there!

Thank you, Scott, for this synopsis!

I should have been a Leprechaun instead of a lawyer. Then I could punish Irish stereotypers with glee!

Perhaps you could be a lawyrechaun, Debbi. The most feared of all mythical creatures.

Nearly. He (it?) was played by Warwick Davis.