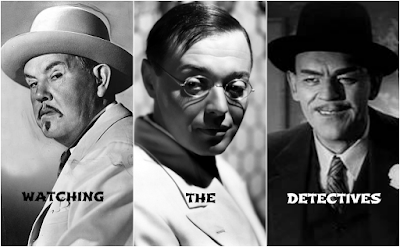 Scott and Jeff engage in a spirited debate about Alien: Covenant  - Is it the best thing since sliced bread? Or the worst thing since loose wheat excreted by a Tribble?

For the Unknown Movie Challenge, we pull back the shoji screen to reveal a shocking ménage à trois of stereotypes as three Fake Asian (or "Fasian") detectives of the 1930s compete for the title of Miss Most Racist! Join Charlie Chan, Mr. Moto, Mr. Wong, and Special Guest Star the Xenomorph.

[Note: Thanks to slight technical difficulties, the episode ends rather abruptly...with a Newsies joke.]
[Cross-posted from The Slumgullion]
Posted by Scott at 12:26 PM

Even a lesser Jeunet film is head and shoulders above Cameron at his best. He is an astoundingly pedestrian storyteller with a good feel for special effects. I hold him responsible for hacks like Zack Snyder and Michael Bay polluting screens with rivers of crap.

I agree with Scott that Ridley Scott should hang it up. Billy Wilder went from groundbreaking, staggeringly good films like "Stalag 13", "The Apartment", "Some Like It Hot" and "Sunset Boulevard" to a pile of garbage like "Buddy Buddy". Ridley's competing with Robert De Niro for Most Tarnished Legacy.

Damn, I just went full Grumpy McGrumpnuts there, didn't i?

I'd suggest that one of the earlier Mr. Motos would have been better quality, since they would have been truer to the original concept of Mr. Moto as a pretty nasty dude, but I do understand wanting to do ones from the same year.

I'd read that the guy who was the original director was kind of freaked to meet Lorre because at that time I guess Lorre was kind of stung out on heroin. And not in the best physical shape for a role that anticipated an actor who was supposed to be very physical.