Yesterday the RNC offered me the chance to express my longing for George W. Bush through the eloquent medium of the Beefy-T; and yet, apparently because I'm a jerk, I ignored Chief Operating Officer Sara Armstrong's entreaty and instead spent the money on one of those shirts with airbrushed boobs on it, since it basically sends the same message.

But the Republican National Committee is turning up the tough love, and today they brought in Co-Chair Sharon Day:

Some of our country’s best years followed that moment.

I have to agree, mostly because I got laid a lot in the mid-Eighties, although at the time I attributed that less to Reagan and Bush and more to Bartles & Jaymes.

I remember watching with optimism as Reagan and Bush honorably protected my freedoms and defended my conservative values.

While I remember watching a lot of Airwolf. Frankly, I don't think either one of us has much to be proud about.

They left a legacy of prosperity, opportunity and perseverance for Americans.

Oh, so that's what I stepped in. This all apparently predates the law that now requires political parties to carry plastic bags around to scoop up their Presidents' legacies.

So I am thrilled the RNC is taking the time this year to honor the legacy of Reagan and Bush by offering you a limited-edition vintage Reagan-Bush ’84 t-shirt. 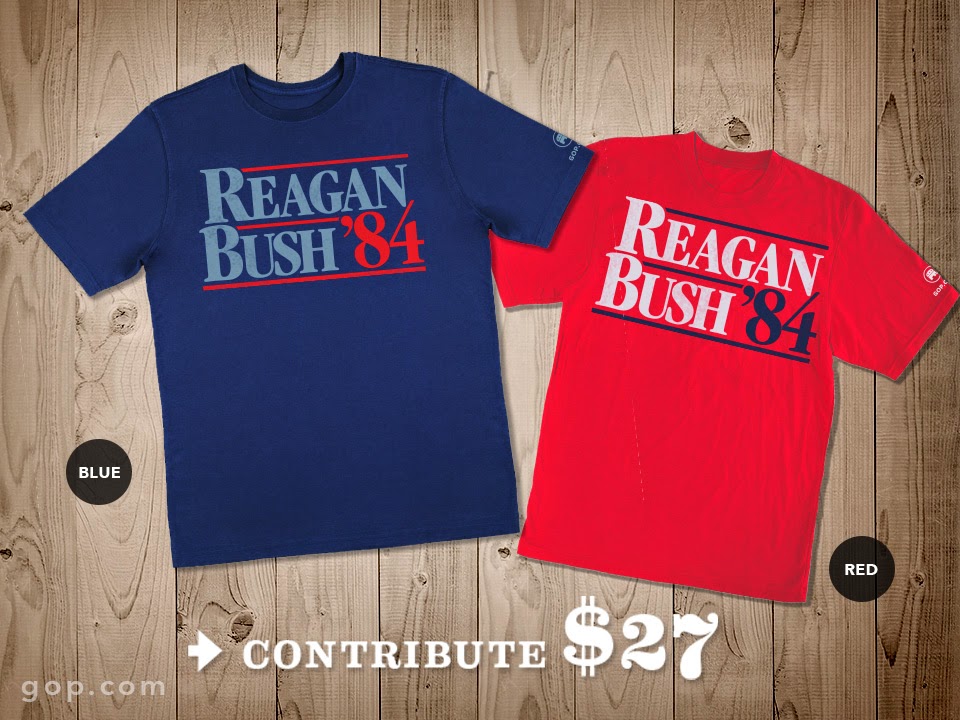 Some say that an appeal to the senses  -- such as the taste of a little piece of madeleine -- is the key to recollection, while others maintain that memory is best unlocked by novelty undershirts. Regardless, the remembrance of things past remains a profound experience, whether the author is Proust or Zazzle.
But while Sharon's lyrical nostalgia is charming, it's only the Good Cop warm-up for RNC Treasurer Tony Parker's Bad Cop act.

Did you abandon the Republican Party?


Chairman Priebus has written to you already this year asking you to contribute to the RNC and renew your membership. But we haven’t received your financial support yet this year.

I'm sorry, I've just been distracted by how much "Chairman Priebus" sounds like one of those fake, science fictiony titles, like "Commando Cody" or "Padishah Emperor Shaddam" or "Judge Wapner".


Your past support has shown us that you believe in the Republican Party and the conservative principles we stand for.

Given that my past support has consisted entirely of stealing the content of your emails and using it for my own nefarious purposes while giving you nothing in return, I believe that I've not only studied the principles you stand for, I've mastered them, and am now ready to leave the monastery and walk the earth like Kung Fu.


So we are giving you one more chance to renew your membership with the Republican National Committee.


Right now you are handing the advantage over to Democrats. That’s exactly what President Obama, Nancy Pelosi and Harry Reid want you to do. With committed Republicans like you sitting out in 2014, the Democrats are able to continue their liberal rampage on conservative principles.

I'm not sitting it out, I just don't want to shoot my wad too early, so I'm waiting until the "liberal rampage" is upgraded to a "socialist stampede." But don't worry -- I've set up a Google alert.

and shake it all about.


Don’t turn your back on the Republican Party

Relax, Tony. That's a lesson I learned a looong time ago.
Posted by Scott at 12:57 AM

I've been waiting for a liberal rampage for decades now.
~

Does anyone besides me think the $27 price tag for these is an inside joke?

Great job, Scott. It made me laugh so much that I realized that this is what the RNC exists for: to give you material. I was even tempted to send them a check for .27, and then demand a T-shirt, claiming decimal points are a Lefist plot. But that's probably what Harry Reid, Nancy Pelosi, FDR, and God want me to do.

Thanks, Sheri. (By the way, for those who might think "Lefist" is a typo, it's actually Liberal Code. Come the Revolution, my nom de guerre will be LeFist. And you guys have to call me that.)

As for the Mystery of the Number 27, I believe it's actually the answer to life, the universe, and everything -- 42 -- once you deduct the costs of political consultants and brand stylists.

I still remember with the deepest, most heartfelt gratitude how Reagan defended our freedoms from the existential threat that was Grenada. And how we'd all be groaning under the Panamanian yoke, if it hadn't been for Bush the Elder. Truly, these were mighty men of yore!

LeFist, eh? Next I suppose you'll be telling us you're a dead ringer for Jean Reno.

I believe that I've not only studied the principles you stand for, I've mastered them, and am now ready to leave the monastery and walk the earth like Kung Fu

but did you snatch the bullshit from their hand, young grasshopper? ;}