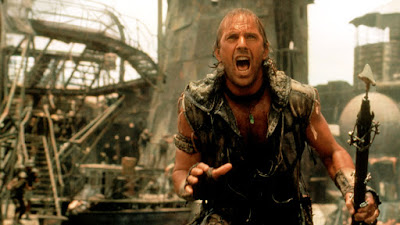 In its day, Waterworld was the most expensive movie ever made, reportedly costing almost $200 million. While it’s nice to know that they cared enough to spend the very most, you have to wonder if nearly a quarter-billion dollars is a reasonable sum to pay for a routine action yarn about an irritable post-apocalyp- tic yachtsman who drinks his own pee. But that’s all you know, since you’re not a moviemaker! But then, neither are we. However, we do have a copy of The Making of Waterworld we got at the thrift store, and as we proceed with our summary, we’ll point out how each dollar is being spent.

Our movie begins with the Universal logo melting ($100,000). Then God ($150) announces that it’s the future and the Earth is covered with water. And then we catch our first glimpse of our hero, Kevin Costner ($25 million), as he pees into a cup. Despite what you might imagine, this isn’t a studio-ordered urinalysis to make sure their money didn’t go for drugs, as Kevin runs the pee through a primitive cappuccino machine and drinks it. And to show that his effluent has an especially piquant bouquet, he swirls it around his mouth, gargles it, and then spits a few drops onto a papier-mâché lime tree ($2), so it can also taste his goodness.

Kevin is a noble but crabby loner, much like Rambo or the Unabomber, and like them he also goes by only one name: Mariner. (I don’t dispute the hero’s right to assume the name of a major league ball club, although personally I would have picked one with a better bullpen.) Kevin lives aboard his boat made from scavenged eggbeaters, ice cube trays, and other crap, and ingeniously kept afloat by a large, inflated ego. He ekes out a living from the harsh and unforgiving sea, diving into its inky depths, where no ordinary man dare go, to recover leather mugs from the Renaissance Faire.

But before he has the chance to bring up a soggy pair of pantaloons, who should appear but evil incarnate: the Smokers! Yes, in the future, really strict clean-air legislation has divided the world into two groups: the Smokers and the Non-smokers. The Smokers are a gang of Jet Ski-riding Hell’s Angels who kill, rape, plunder, burn fossil fuels, and eat Spam. They are led by a gratuitously villainous Dennis Hopper, who was apparently asked to reprise his performance from Speed, but make it a little less restrained.

In contrast to the depraved Smokers, the noble Non-smokers inhabit a man-made atoll composed entirely of recyclables ($50 million); they eat only free-range fish, drink only Evian distilled-urine, and only watch PBS. But one thing both groups share is a fondness for leather clothing, an odd choice for Post-Apocalyptic beachwear because it is hot and becomes really smelly, which you’d think would be a disadvantage in a society lacking Arid Extra Dry. And hey, since there are no animals in this world, one is forced to conclude that Soylent Garments are made from people!

Anyway, before the Smokers can give him emphysema, Kevin heads over to the Non-Smoking section, but they won’t let him in until he displays what’s in the leather mug: dirt! He takes it to the assay office, where the county agent tastes it and pronounces it pure. It seems that in the future a 5-pound bag of peat moss makes you Donald Trump. This could also explain why the people of this particular future are so dirty—they wear their alluvium as a status symbol, with only the really wealthy being able to afford not to bathe.

Kevin takes his dirt money and buys a tomato plant from Jeanne Tripplehorn, who is apparently the poorest person in town, judging by her cleanliness. As Kevin leaves with his tomato, the Non-Smokers accost him, and attempt to shake him down for his man-seed, just like in The Postman. The reoccurrence of this motif suggests that Kevin is a thoughtful futurist with a brave vision of things to come: specifically, a time in which the current model of transnational capitalism has evolved into an entirely jism-based economy.

However, Kevin is apparently a skinflint (or in this case, a skinfluteflint) and denies them his essence. The Non-Smoking leader promptly accuses Kevin of hiding something. Oddly enough, it’s not his sexual orientation that he’s hiding, but gills and webbed toes! Kevin is arrested for being a mutant, and sentenced to languish in a dangling cage as a warning to Dan Ackroyd.

Meanwhile, let’s check in on little Ebola, a girl with a strange tattoo on her back, which is rumored to be a map to Dry World (where the Wet Head is Dead). She is busy doodling cave drawings of horses, trees, and soap, things no one in this society have ever seen. Her foster-mother Jeanne, and foster-uncle Coot (an amalgamation of Leon Russell and the Wizard of Oz), want to escape to the legendary Dryland, but they can’t figure out what the tattoo means (Mr. Roark often had the same problem).

Suddenly, the atoll is attacked by the Smokers, who are seeking the fabled Girl With a Map To Dryland Tattooed On Her Back. (Apparently the demise of the Automobile Club has left a real cartographic void.)

Coot’s balloon ($2 million) is inadvertently launched, and he has to leave Jeanne and Ebola behind; he can’t come back, he doesn’t know how it works! So, Jeanne releases Kevin from his birdcage on the condition he takes her and Ebola with him on his boat. But as soon as they are at sea, Kevin threatens to dump his passengers because there’s not enough urine for three. Jeanne disrobes and offers to have sex with Kevin if he’ll spare them. He stares at her naked form for some time, waiting for her to lay her eggs so he can fertilize them; when she doesn’t follow through with her part of the bargain, he clubs her on the head. Kevin hates a tease.

The fish, woman, and child begin to bond during their time at sea. Ebola uses Kevin’s crayons without asking, so he throws her overboard. Jeanne breaks a mast fighting off Smokers, so Kevin chops off her hair. In exchange for an old National Geographic, Kevin pimps Jeanne to a crazy Irish Robin Williams-impersonator. So, they are becoming a family.

But this idyllic life comes to an end when the Smokers find them again and grab Ebola. Kevin and Jeanne jump overboard to escape death from secondhand smoke. When Jeanne complains that she can’t breathe underwater, Kevin says he’ll breathe for both of them; he proceeds to blow carbon dioxide into her mouth while sneakily frenching her. When they surface, Kevin’s boat has been burned and the Smokers are nowhere in sight. So, there’s nothing they can do but have sex ($3.2 million), as Jeanne learns the origins of the term “cold fish.”

Kevin is saved from cuddling by the reappearance of Coot and his balloon. Coot indicates that the survivors of the Non-Smoking Section have started a new atoll made from old egg cartons and beer cans, and invites Jeanne and Kevin to join them. But Kevin declares that he must rescue Ebola, even if it means certain death. Not because he’s after her map, but because she’s his friend, and because she still has one of his crayons.

Over in Smoking Section Headquarters, the ancient oil tanker Exxon Valdez ($70 million for rental, plus a $5 million surcharge for Irony), Dennis Hopper tries to get Ebola to tell him what her map means. She doesn’t know, since she can’t see her own back, but she does know that her Westley...er, Mariner will come for her. And then they’ll be sorry—because he’ll make them watch Robin Hood, Prince of Thieves.

Just then, a lone, dark figure walks across the deck. Yes, it’s Mad Mackerel, the Roe Warrior! He’s a post-apocalyptic laconic hero who’s come to eat fish flakes and kick butt, and he’s all out of fish flakes! Dennis best sums up the situation: “He’s like a turd that won’t flush.” And since this was before The Postman, Message in a Bottle, 3000 Miles to Graceland, and Many More, Dennis is starting to look like Miss Cleo.

Kevin throws a torch into the tanker’s fuel hold and rescues Ebola. Uncle Coot arrives in the balloon, saving Kevin’s butt yet again (and if you want to see that butt, check out For Love of the Game, on DVD!)

Coot looks carefully at Ebola’s tattoo and suddenly realizes how to read the map (although he still has trouble refolding it). Armed with this convenient plot twist, he leads the other survivors to a lush, verdant land with pure, clean water—but alas, still no soap. The group spots a grass hut ($3 million), and inside, two skeletons lying next to tattoo needles and a copy of the graphic on Ebola’s back. And now it all makes sense! Ebola is actually the child of Gilligan and Mary Ann, the last of the castaways. They sent her to the mainland for help, but the stupid kid spent all her time coloring and forgot to tell the authorities about her parents, leaving them to die of coconut cream pie poisoning.

But everyone is so thrilled to have enough dirt to live like kings that there are no recriminations. However, the gilled-and-webbed Kevin isn’t at home on the land, and he must tell the tearful Ebola that she’s a fine girl, and what a good wife she would be, but his life, his love, and his lady is the sea. Kevin and Jeanne exchange half-hearted good-byes, then he steals director Kevin Reynolds' boat and sails off, taking the remaining $100 million of the studio’s money with him. Because even a mutant can see that his back-end participation points are going to be worthless. The End.

Of all the films reviewed for this book, Waterworld presents by far the darkest vision of the future: a time in which Man’s natural habitat has vanished, leaving him crammed onto rusty, floating hulks, where he is preyed upon by violent locals, forced to inhale noxious fumes, and reduced to eating Spam washed down with pee. In other words, it’s a Carnival Cruise, so the people best equipped to survive this harsh new environment are probably elderly Jewish women from Coral Gables.

But how can we use the wisdom imparted by this film to better prepare ourselves for the apocalypse? Well, to begin with, if you finally do get that tattoo you’ve been thinking about (oh, don’t deny it) you should forget the rose on your breast, the butterfly on your ankle, or the ying-yang symbol on your ass, and instead have Buzz at Inka-Dinka-Doo on Hollywood Boulevard inscribe the entire Rand McNally World Atlas on your back. (Oh sure, it’ll hurt, but at least when the apocalypse comes you’ll get to have middle-aged potheads and faded matinee idols listlessly tussle over you.) Other than that, there’s lots of little things you can do to prepare for the Deluge: load up on leather pants and Sea ’n Ski, Dramamine, Underwood Deviled Ham, and sphagnum moss. Take swimming lessons at the Y. Get your semen appraised. Cancel the newspaper. Oh, and you’ll want to start mutating. But don’t go crazy with it, or you could wind up like John Travolta in Battlefield Earth, whose bizarre alien digestive tract required him to continually chew, swallow, and regurgitate scenery like cud.
Posted by Scott at 12:16 AM

When the lead actor is an uncredited director, does that mean the filming was....troubled?

By the way, what anniversary is chia? I've got these seeds, see...