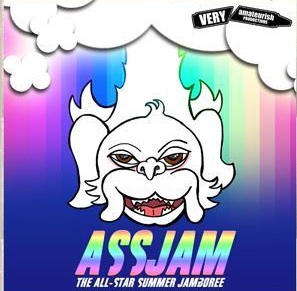 The new edition of the All-Star Summer Jamboree podcast is out, and this episode is all about the geekgasmic movie news that leaked and oozed and pre-came from Comic-Con:

This week Jeff and Scott discuss Batman, Suicide Squad, and a LOT of Star Wars as Jeff reconnects with his inner child until it issues a restraining order.

There are the usual obsessive digressions, plus the never before told story of how I discovered the existence of Star Wars long before most kids my age, but thought -- due to a tragic miscommunication -- that it was about Star Belly Sneetches.  Click on the link above to give it a listen.

[By the way, my sincerest apologies for all the dead air around here lately. Things have been a little rough chez stately Crap Manor, but I plan to rise above it like an inexplicably buoyant Ugandan and resume actual blogging shortly.]
Posted by Scott at 4:42 PM