Yes, it's the natal anniversary of our very own Hawkeye, heydave. Although he was born and raised in Chicago, City of Big Shoulders and the apparent inspiration for those weird, linebacker-looking gowns they wore on Dynasty, Dave was eventually wished into the cornfield by Billy Mumy, where he has remained, shucking and detasseling, for the past twenty years or so. So really, when you think about it, his journey from dazzling urbanite to soil-encrusted rustic makes heydave our own version of the Eddie Albert character from Green Acres, or the Fred MacMurray character from The Egg and I, or possibly the Scarecrow from Jeepers Creepers.

Anyway, it's Party Time! Sadly, we're out of prunes, but I did find this advertisement extolling a concoction my grandmother used to make for me whenever I visited, perhaps because the Depression hit her particularly hard, and left Grandma with remarkably elastic definitions of words such as "edible," and extremely narrow definitions of words like "abomination." 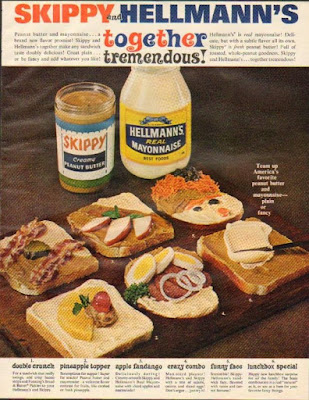 Yes, Skippy and Hellmann's together! "Tremendous" is certainly one word you could use to describe it, assuming what you're describing is the size of the liability issue involved, but others certainly come to mind and nearly to the lips, before I remember there are ladies present. Now this isn't exactly Grandma's lunchtime recipe (which she always called "the Special," raising my hopes that she'd been hybridizing a particularly potent breed of chronic rather than slapping together a shit sandwich).  "The Special" was served on toasted Roman Meal bread, peanut butter spread on one slice, mayonnaise (Best Foods in this case, since we lived west of the Rockies, but it's all the same) on the other, with some freshly-washed iceberg lettuce added for a bit of crunch and water damage.  But the marketeers responsible for this Superman v. Batman-style battle in your mouth operated on the theory that if the flavor profile of their product was hideous, it would seem less hideous if it was buried under a bunch of other, more hideous combinations.  So let's check out the menu, shall we?

It doesn't strike me as a promise so much as a flavor threat, but let's see what they've got...


1.  double crunch: For a sandwich that really swings,

Nowadays, of course, a sandwich that really swings is less concerned with tasting good, and more worried about hackers releasing its user profile from Ashley Madison.


...add crisp bacon and Fanning's Bread & Butter Pickles to your Hellmann's and Skippy.

And if that's not enough to bring about the End Times, just hold your Horses of the Apocalypse, because we haven't even gotten to the pineapple yet...


2. pineapple topper:  Scrumptious for supper!  Peanut butter and mayonnaise -- a welcome flavor contrast for fruits, like canned or fresh pineapple.

Okay, that doesn't "contrast" flavor, it just flat out contradicts it.

I figured someone must have dared them to serve it.

The exclamation point suggests the copywriter would like me to believe this will prove a treat for my tastebuds, a thrilling departure from the usual drab noonday fare, but it just sounds like the kind of sad little simulacrum of a Christmas dinner British POWs would cobble together from the dregs of their Red Cross packages.

A guy passing out flyers once shouted those exact same words to me outside Show World on Eighth Avenue.


Hellmann's and Skippy with a trio of salami, onions, and sliced eggs!

It fails as a sandwich, but brilliantly succeeds as an ipecac.

You know a product is bad when its slogan slips into verbal abuse.

Not being an enraged chimpanzee, I'm seldom tempted to eat a face, but if it's flavored with desiccated grapes and root vegetables?  Well, that's another story!


6. lunchbox special: Happy new lunchbox surprise for all the family! The basic combination is a real "natural" as is, or use as a base for your favorite fancy fixings!

Translation: We're out of ideas and can't even pretend this is food anymore, but the boss wants the presentation on his desk by five and we're this close to snapping a picture of peanut butter and mayonnaise garnished with pencil shavings and that smoldering lump of latakia cinders Jenkins just knocked out of his pipe.  So figure it out for yourself, will ya?

I know foodie culture has gotten out of hand in recent years, but honestly, how was it even possible to be a food critic back then? I imagine every review just consisted of one word, like "Yuck" or "Don't."

Anyway, now that we've paid our ten cents and gawked at the freaks on the buffet table, let's head on over to the dessert station for the traditional birthday cheesecake. I've decided to keep the Myrna Loy theme going this week, so here she is, reasonably nude in The Barbarian (1933): 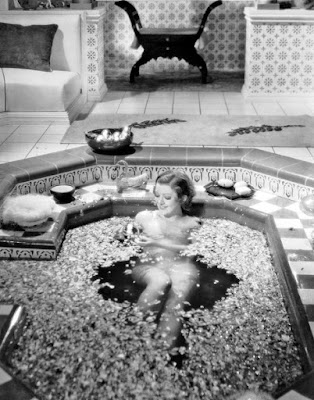 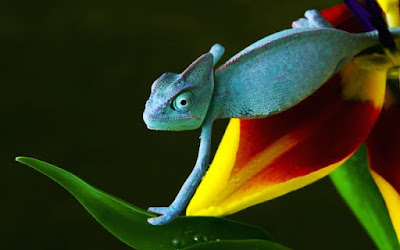 Happy birthday, heydave!
Posted by Scott at 2:23 AM

Yes, Skippy and Hellmann's together!

OK, either I'm still drunk or this is going to be the worst hangover ever....

Happy Birthday, Heydave! I'm not entirely certain why Scott is trying to make you start drinking this early in the morning, but what the hell. You can't take your liver with you, after all.

I have generally considered that food must be considered edible if all its component parts are edible, but this, yeesh. Actual nausea, so well done Scott. I wonder what a mayo and peanut butter birthday cake would be like...

I literally always have both peanut butter & mayo in my pantry, but Sweet Blood of Jesus! The two combined?

I wonder why they didn't suggest peanut butter, mayo, and prunes. That would have won the cold war right then. Happy birthday, Dave, and may you get something better than this to eat today.

That ad is the most horrifying thing I've ever seen. If I was starving to death, I'd rather eat rats.

Sorry, heydave, but you have been badly served. AND ON YOUR B-DAY!!!11!

Every fule know that peanut butter and Miracle Whip© are the way to go.
~

I've had this, right down to the Roman Meal bread. Just the basic. But that was 40 years ago. I don't recommend it.

I do not know whether to laugh or cry over this PB/mayo combo, so I've decided to do both.

If the bread is toasted, and the lettuce is dried off first, this is (in my opinion) a very tasty combination. I used to add a nice fried egg as well. Not sure about the pickles, however. I'll have to give that a go. But bacon? Absolutely.

But you MUST toast the bread.

What, no Kraft Miniature Marshmallows?

Why yes, I left that fastball out over the plate....why do you ask?

I think I understand now why obesity was less of a national problem back in the 50s. One look at that spread should be enough to kill anyone's appetite for hours -- if not days -- afterward.

I'm still a bit puzzled that anyone in those whitebread times thought this sort of (supposedly) edible miscegenation would pass muster, particularly down South. Deep-fried mayo or peanut butter, sure, but it's part of God's plan that some foodstuffs remain segregated.

Although there's probably no causal connection, I find it an interesting coincidence that you were rusticated around the same time the first of those eight Children of the Corn sequels was released.

Happy Bithday heydave! Hope you still have your FI stamp, 'cause I think that would be the right response to being served this lunch.....