Bloggers and Beast Blogging: The Shadows and Reflections Edition

Look on my works, ye mighty, and despair! I know I do.  And yet, not all reflection is a reason for reflux, and if you're not too busy for a bit of light works-looking this weekend, I would highly recommend the Jon Swift Memorial Roundup "(The Best Posts of the Year, Chosen by the Bloggers Themselves)" for a selection of the half-sunk, shattered visages that lie on the lone and level sands of the blogosphere.

Once again, Batocchio has done a splendid job of keeping the tradition alive, with contributions from writers both celebrated (Roy Edroso, Actor212, the Rude Pundit, Yastreblyansky, Balloon Juice, Lance Mannion) and obscure (World O' Crap).  I always have difficulty digging up anything I would consider the "best" post of the year, so as usual I just defaulted to the one that pissed me off the most: ("Who can forget Sabrina Corgatelli, the sultry, seductive Idaho accountant who went to Africa, wrapped a dead giraffe around her body like a mink stole, and sang 'Blood Diamonds Are a Girl's Best Friend'? ")

Check out the list of contributors when you get a chance. It's probably one of the best ways to remember a year most of us would rather forget.

But while looking back and often spitting over our shoulder at the departing year is an old habit around here, to certain recent immigrants who are attempting to assimilate, it's a new and strange custom which may take some practice... 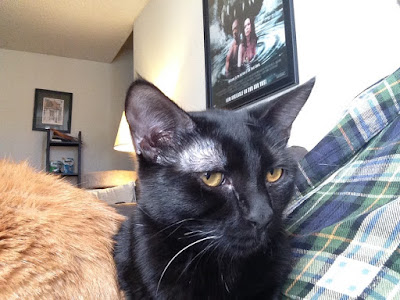 SHADOW:  Okay, end of the year, time to take stock. Pros and cons, plus and minuses. Let's see...On the up side, I've got a new home and I'm no longer living in an abandoned building in East Hollywood. Continuing on a positive note, 33% of the new family has a huge, warm, snuggle-worthy orange ass, and another 33% comprises a nice lady who doesn't take an overly strict inventory of her turkey scraps." 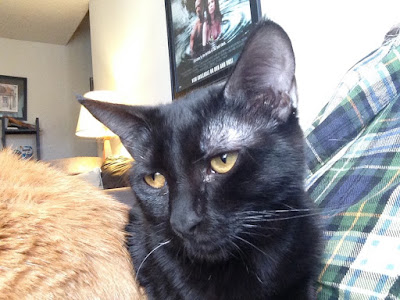 SHADOW:  On the downside, the last 33% consists of the guy who wrote Frankenfish.
Posted by Scott at 9:32 AM

Hey wait! That last is an UPSIDE, little missy!

Cats know how to put things in perspective! :)

Agreed with Dr Alice. Also, Shadow might try snuggling the household's other asses, Nagi is pretty impressed with the humans in her home.

It still amazes me that I've somehow managed to miss Frankenfish. Especially since the reviews make it sound like massive fun. (Hear that, Netflix streaming?)

As always, though, one may only stand in "Awww ..." at such invincible adorableness. I'm sure Moondoggie and his new friend will have a happier New Year; I hope the same will be true for the rest of you guys.

Moonie, you & Mary seem very privileged, indeed, to not only be surrounded by so many bipeds who adore you, but to have been adopted by a very regal black cat, who, in my experience, are some VERY snotty cats, when it comes to picking potential human servants. Unless, of course, you've got cans of white-meat chicken and a can-opener, at which point, it's open season. I've told y'all about James Dammit, who adopted me a few years ago, back during the Summer In Hell(acious) TENTS, n'est-ce pas? When it comes to snotty, demanding, imperialist brats who dole out affection as reliably as Soviet toilet paper, he is THE CZAR of stuck-up cats. But when I'm abed, he's right there, checking my pulse, feeling for the most-tender parts to eat, should I pass on or otherwise come to stop breathing... Hey, I'm a pragmatist. If nobody reaches my body in time to put my "ORGAN DONOR/DNR" & "ATHEIST/DON'T EVEN *TRY* IT!" tattoos to good use, might as well feed the cat!

Here's hoping that none of us wind-up in the litterbox this year, yes? And, after all, on the cold nights, at least he pretends to "snuggle" me, purely for the body heat. Show me one cat on earth who isn't a mercenary bastid, and I'll get your eyes checked for you.